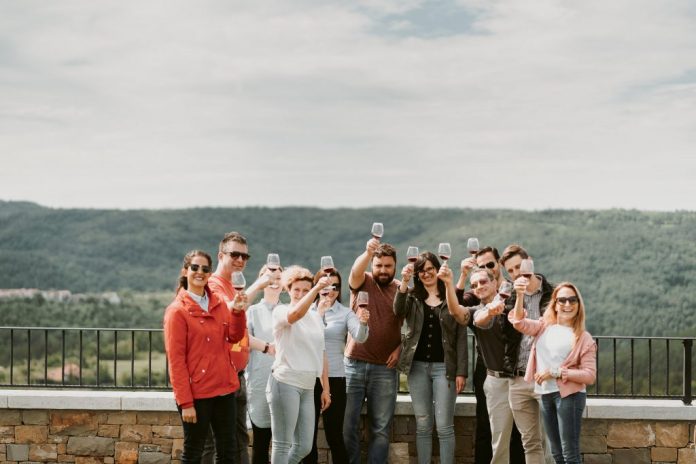 Slovenia is known as one of the best winemaking countries in the world. The country on the sunny side of the Alps boasts itself with three distinct wine regions (and their three constituent districts), where some of the award-winning winemakers fill the bottles with prestigious wines.

From the earthy reds of Mediterranean Primorska to the sweet whites of Podravje
in the northeast to the limitless supply of refreshing cviček of Posavje in
the southeast. Slovenia’s wine industry, one of the oldest in the world and yet still, for many, an unexplored scene. In this article, we give you a short insight into Slovenian wine and winemakers. Explore the top facts about Slovenian wine down below.

Slovenia has around 28,400 wineries

With more than 28,000 wineries in Slovenia that translated to roughly around 80 to 90 million litres of wine being produced annually. Any concern about running out of wine in Slovenia is practically non-existent and if that is not something to cheer for then we don’t know what is.

There is a vineyard or a winery for every 70 people in Slovenia.

Slovenia might be a small country in the heart of Europe, but that does on make the number of vineyards scattered across the country lower. Slovenia has around 22,300 ha of vineyards in total. Quite impressive, right?

Slovenians consume 94 % of the wine they produce.

Slovenians surely love their wine. It is said that around 94 % of all wine produced in the country is consumed by the nations residents.

Over 50 types of vines thrive in Slovenia

Slovenia has amazing climate and soil, which ulimately results in having a greater diversity when it comes to producing different types of wine. There are over 50 types of vines growing in Slovenia. Furthermore, Slovenia can prouldy say there are 7 native wine varieties growing in its vineyards.

A prestigious bottle of Slovenian dessert wine has been sold for no less than half a million euros.

About 75 % of Slovenia’s production is white wine.

While Teran is good for your health, Slovenian winemakers mainly produce white wines, which are quite popular among the masses. Slovenia is not only known for its high-quality white wine, it is also known for its production of orange wine.

Around 6,1 million liters of Slovenian wine is exported every year.

The Podravje wine region is considered to be among the best wine growing regions in the world.

Podravje (so named for the Drava river valley) is the largest of Slovenia’s wine regions.
The region is synonymous with white wines, as they account for over 95%
of output, and is most known for producing some world class dessert wines,
including ice wine well as Slovenia’s first sparkling wines, as well as fresh, dry
whites that have had a penchant for collecting Decanter awards in recent years.
In fact, the Podravje wine region is among the 4 % of the best wine growing regions in the world. Cheers to that, Podravje!

The oldest vine in the world resides in Maribor, where it has been growing for over 400 years.

Where the oldest vine in the world can be found winding its way up the front of the building, the house is now a museum dedicated to teaching visitors all there is to know about the wine culture of the Styrian region of Slovenia. At 400 years of age the vine has claimed its rightful place in the Guinness Book of Records and still bears the Zametovka or Blue Franconian grape, one of the oldest wine types in the country. The museum offers guided tours and also boasts an unparalleled collection of Styrian wines, which can be bought at a very generous discount. The house also plays host to a festival in its own name which is held every September, and is the starting point for various wine roads.

Learn more about the oldest vine in the world here.

Some of the best orange wine is produced in Slovenia

Orange wines became popular a few decades ago, however, the orange wines are nothing new, as the first orange wines were drunk some 6,000 years ago in Georgia. The revival of this ancient process of orange wine production in Slovenia has occurred in the last twenty years. Slovenian biodynamical producer Zorjan’s amazing muškat otonel Dolium is best rated Orange wine in the world in July’s Decenter issue of 30 best orange wines in the world. Third place also goes to Slovenia when it comes to the best orange wine, Vina Blazic rebula selekcija.

In Gornja Radgona they have been producing sparkling wines for over 160 years.

Slovenia not only has one of the oldest wine industries in the world, it is also known to have a long tradition of producing sparkling wines. Gornja Radgona is most famous for its Radgona sparkling wine, which has become a true staple for many Slovenians. One could say it is the “go to” sparkling wine for all major celebrations in Slovenia.

Slovenians are passionate about their wine. Therefore, it truly comes to no surprise that Slovenian wine is protected. Cviček is the only wine in the world with a wine composition protected by law. Since 2001 Cviček has been legally protected both within Slovenia and the EU, as a product of traditional denomination, meaning that only wine produced in the Dolenjska region in accordance with official specifications can be labeled as Cviček. As you can see Slovenians take their Cviček very seriously.

Slovenia is known as one of the best winemaking countries in the world. The country on the sunny side of the Alps...
Read more

The Column with Simone B. Michielen: I can’t live without… Mayonnaise!

Vegetable oil, eggs, vinegar and mustard with a pinch of salt and pepper, that can’t go wrong, can it? It can. In...
Read more

Check out the weekly news updates from Slovenia. We have highlighted and summarized the weekly Slovenian news stories.
Read more