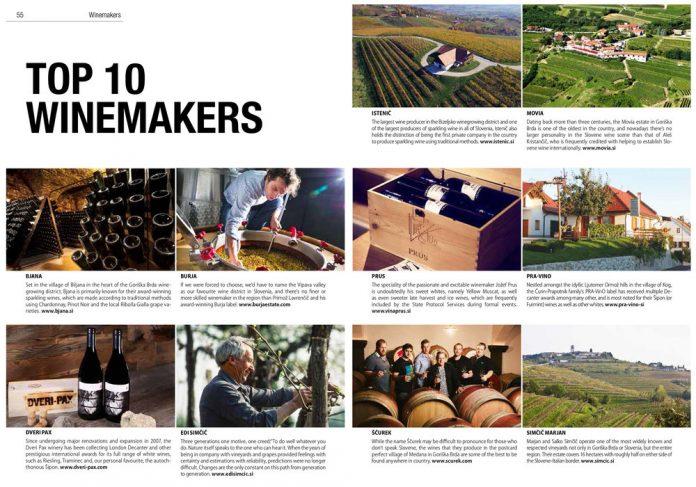 Slovenia is a small country, but in recent years it has made a big name for itself in the world of wine. The country’s three distinct wine regions (and their nine constituent districts) produce a wide variety of wines, from the earthy reds of Mediterranean Primorska, to the sweet whites of Podravje in the northeast to the limitless supply of refreshing cviček of Posavje in the southeast. Below is our selection of Slovenia’s Top 10 Winemakers, as presented in The Slovenia Book.

BJANA: Set in the village of Biljana in the heart of the Goriška Brda wine-growing district, Bjana is primarily known for their award-winning sparkling wines, which are made according to traditional methods using Chardonnay, Pinot Noir and the local Ribolla Gialla grape varieties.

BURJA: If we were forced to choose, we’d have to name the Vipava valley as our favourite wine district in Slovenia, and there’s no ner or more skilled winemaker in the region than Primož Lavrenčič and his award-winning Burja label.

DVERI PAX: Since undergoing major renovations and expansion in 2007, the Dveri Pax winery has been collecting London Decanter and other prestigious international awards for its full range of white wines, such as Riesling, Traminec and, our personal favourite, the autochthonous Šipon. www.dveri-pax.com

SIMČIČ MARJAN: Marjan and Salko Simčič operate one of the most widely known and respected vineyards not only in Goriška Brda or Slovenia, but the entire region. Their estate covers 16 hectares with roughly half on either side of the Slovene-Italian border.

EDI SIMČIČ: Three generations, one motive, one creed: “To do well whatever you do. Nature itself speaks to the one who can hear it. When the years of being in company with vineyards and grapes provided feelings with certainty and estimations with reliability, predictions were no longer difficult”.

MOVIA: Dating back more than three centuries, the Movia estate in Goriška Brda is one of the oldest in the country, and nowadays there’s no larger personality in the Slovene wine scene than that of Aleš Kristančič, who is frequently credited with helping to establish Slovene wine internationally.

PRUS: The speciality of the passionate and excitable winemaker Jožef Prus is undoubtedly his sweet whites, namely Yellow Muscat, as well as even sweeter late harvest and ice wines, which are frequently included by the State Protocol Services during formal events. www.vinaprus.si

ISTENIČ: The largest wine producer in the Bizeljsko winegrowing district and one of the largest producers of sparkling wine in all of Slovenia, Istenič also holds the distinction of being the first private company in the country to produce sparkling wine using traditional methods. www.istenic.si

PRA-VINO: Nestled amongst the idyllic Ljutomer Ormož hills in the village of Kog, the Čurin-Prapotnik family’s PRA-vinO label has received multiple Decanter awards among many other, and is most noted for their Šipon (or Furmint) wines as well as other whites. www.pra-vino.si

ŠČUREK: While the name Ščurek may be di cult to pronounce for those who don’t speak Slovene, the wines that they produce in the postcard-perfect village of Medana in Goriška Brda are some of the best to be found anywhere in country. www.scurek.com