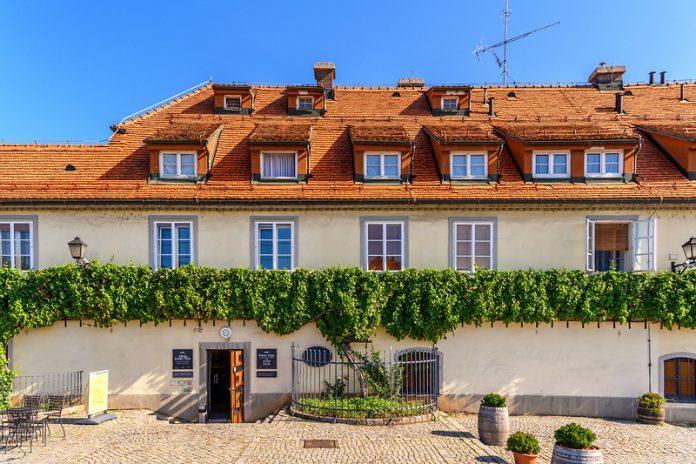 Sitting in the foothills of the Pohorje Mountains and straddling the banks of the Drava River, Maribor is Slovenia’s second largest city though it sometimes feels more like a country town. 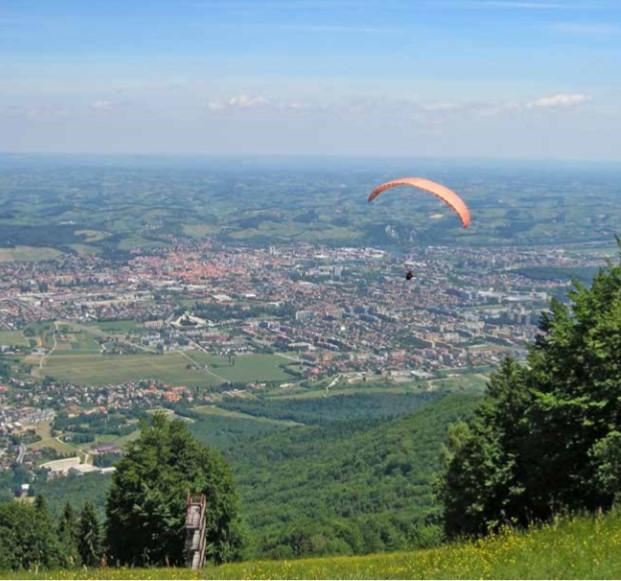 An industrial powerhouse in Yugoslav times, many of the state owned companies closed down leading to a tough transition period which the city is still dealing with today. And whilst the industrial zones aren’t much to see, there are plenty of excellent natural, cultural and historic sights worth checking out both in and around town. Despite its size, Maribor has a vibrant café culture, excellent bars and restaurants as well as happening nightlife, making it one of our favourite city getaway destinations. In fact Maribor has so much going on it was even named the European Capital of Culture in 2012, though the mantel has been passed on, the city is still a cultural hub and host of many a great event not least the annual Festival Lent. The city is also famed for its long wine traditions, officially being home to the oldest grapevine in the world, and the vineyards come almost to the edge of town. Also on the edge of town are the Pohorje mountains which offer plenty of (downhill and even more cross country) skiing opportunities, that is when they’re not hosting international ski competitions, whilst in summer nature lovers explore the Pohorje’s forests, waterfalls and moors.

MARIBOR CASTLE: Doesn’t look much like a castle in the traditional sense – more like a rather grand administrative building – but this is largely due to the fact that it has gone through more than its fair share of modifications since the original Gothic structure was built in 1555 as a noble residence. Renaissance-style fortifications were added in the 17th century, along with the southern façade, and the 18th century saw the current staircase installed. Now, it is home to the Regional Museum of Maribor, which boasts an impressive collection of artifacts from around the area. Info: Grajska 2,  +386 (0)2 228 35 51, info@pmuzejmb.si, www.pmuzej-mb.si.

THE OLD VINE & THE OLD VINE HOUSE: Where the oldest vine in the world can be found winding its way up the front of the building, the house is now a museum dedicated to teaching visitors all there is to know about the wine culture of the Styrian region of Slovenia. At 400 years of age the vine has claimed its rightful place in the Guinness Book of Records and still bears the Zametovka or Blue Franconian grape, one of the oldest wine types in the country. The museum offers guided tours and also boasts an unparalleled collection of Styrian wines, which can be bought at a very generous discount. The house also plays host to a festival in its own name which is held every September, and is the starting point for various wine roads. Info: Vojašniška 8, +386 (0)2 251 51 00, stara-trta@maribor.si.

MARIBOR CATHEDRAL: First built in 1248 as a Romanesque basilica with a nave and two aisles, the cathedral gained its current appearance in the 15th century as a Gothic structure, though the Baroque chapels date from the 16th and 18th centuries. Inside, one is treated to the sight of a lavishly adorned altar, which lights up the place all on its own. Don’t miss the stained glass window commemorating Pope John Paul II’s trip to Slovenia in 1999. Trips to the top of the tower are also available in spring and summer. Info: Slomškov Trg 20, +386 (0)2 251 84 32, stolna.zupnija.mb@rkc.si, www.stolnicamaribor.si.

MUSEUM OF NATIONAL LIBERATION: This museum exhibits an impressive collection of material from World War II when the Nazis occupied Slovenia and were resisted by the Yugoslav Partisans. Guided tours are available on request where you can learn in detail about the Nazi presence in Slovenia and their attempts to ‘Germanise’ the country, as well as the operations by Partisan fighters from 1941 to the end of the war, when Slovenia was liberated. Info: Heroja Tomšiča 5, tel. +386 (0)2 235 26 00, osebje@muzejno-mb. si, www.muzejno-mb.si.

MARIBOR BY THE NUMBERS:

BISHOP SLOMŠEK MONUMENT: This relatively new statue – only erected in 1991 – is tucked away in a shady corner opposite the main entrance of Maribor’s Cathedral, where the bishop is interred. This is no coincidence, as it was Slomšek who was responsible for the transfer of the Lavantine diocese to Maribor in 1859. The bishop also holds the distinction of becoming the first Slovene saint – an honour that Pope John Paul II personally proclaimed on a visit to Maribor in 1999. Aside from religious activities, Slomšek was also a fervent supporter of the Slovene language, and is largely credited with having founded the primary school system in Slovenia. Info: Slomškov trg.

NATIONAL LIBERATION MONUMENT: Appropriately located in Trg Svobode (‘Freedom Square’), this recently renovated spherical bronze memorial pays tribute to those gunned down by the Nazis during World War II for rising up against occupation. By walking around the monument you can look at public announcements of the executions of the some 667 people who were condemned to death by the German forces. Erected in 1975, the sculpture is the work of local artist Slavko Tihec, and despite its sombre purpose the good citizenry of Maribor have dubbed the monument ‘Kojak’ because of its resemblance to a bald head. Info: Trg Svobode.

MESTNI PARK (CITY PARK): This immaculately-kept park just north of the city centre is definitely one of Maribor’s best features. With its three ponds teeming with many different species of bird and a terrapin or two in amongst them who started life in the nearby and popular aquarium – and highly sociable squirrels up and around the trees, there is much to keep nature lovers occupied but this is also the city’s best place to relax. On Sundays you might catch a classical music concert held in the pavilion right smack in the middle of the park. But the serenity is for the adults. The kids are too busy whooping it up in the playground to be bothered with ‘relaxation’. That can come later in life. Info: Pri Parku.

POHORJE: The mountain range just outside Maribor attracts skiers by the thousands during the winter, and is one of the region’s most popular destinations during warmer months as well. One of the main attractions is the primal forest called Šumik, covering some 19 hectares. Here we find two waterfalls, Veliki (big) and Mali (small) among a whole host of streams and other cascading waters. Pohorje itself is covered mostly in coniferous trees, resulting in an abundance of truly beautiful flora and fauna. One of the most fascinating members of the fauna club is without doubt the Giant Peacock Moth, the largest butterfly on the continent. We also find a range of mammals, insects, reptiles, amphibians and some 90 different bird species. To put it bluntly, if it’s an interesting animal found in Slovenia you can surely find it on Pohorje. The area can be explored equally well on foot or by bike, with a number of trails available for both modes of transportation. There also happens to be a cable to top if you’d like to enjoy the views without the trekking, something we’re not ashamed to admit is usually our main form of transport here. Any guilt is quickly washed away with the majesty of the views of course. There is no shortage of restaurants and cafes around also, for those looking for a stop to refresh, and bus number 6 will whisk you here from the city centre in a matter of minutes.

RAFTING ON THE DRAVA: Historically, the river Drava served as a major transport artery for the industry in and around the region – most notably for timber. While this is no longer the case, visitors can still experience what it was like to guide a flotilla southwards, by taking a rafting trip organised by the Tourist Association of Maribor. The trips include a presentation of age-old rafting traditions, as well as a programme of traditional music and food, and operate until the end of October. Info: Koblarjev zaliv, +386 (0)41 795 475, info@td-maribor.com, www.td-maribor.com.

LENT FESTIVAL: The Lent Festival – held every year between June and July – is in many ways Maribor’s pride and joy. It attracts tens of thousands of people from near and far and gives them a belting time, with its unbelievable programme of music and art, both classical and contemporary. Everyone goes: families with small children, young couples and artistic loners staring at the water with yet another beer-in-hand. But the main achievement of the festival is that most of the activity takes place on the slim strip of terra firma that is the Lent embankment, also the oldest part of the city. How it can cram the throngs gathered without shoving half of them kicking and screaming into the nearby River Drava takes some doing. Info: Various Venues, +386 (0)2 229 40 11, +386 (0)31 479 000, vstopnice@nd-mb.si, www.festival-lent.si.

OLD VINE FESTIVAL: The month-long Old Vine Festival is the main event of Maribor’s annual From Vine to Wine cycle, which begins with the pruning of the world’s oldest vine in spring and ends with a drink of the year’s first wine on St Martin’s Day in November. Various wine and food events are held on Trg Leona Štuklja , as well as in front of the Old Vine House on the Lent waterfront and wine roads in the surrounding countryside. The festival takes place from Oktober until 11th of November. Info: Various Venues,  +386 (0)2 25 15 100, stara-trta@maribor.si, worldoldestvine.com.

TOURIST INFORMATION CENTRE: The city’s well-stocked tourist information centre is the best place to begin a visit to Maribor. The helpful staff can provide a wealth of information on all of the sights both in the city and the surrounding countryside, and various souvenirs, postcards, books and maps are also available for purchase in addition to free brochures and other handouts. Visitors can also arrange walking tours with knowledgeable local guides. Info: Partizanska 6a, +386 (0)2 23 46 611, +386 (0)2 23 46 613, tic@maribor.si, www.maribor-pohorje.si.