Podravje is the largest of Slovenia’s wine regions located in the northeastern part of the country. The region is synonymous with white wines, as they account for over 95% of output, and is most known for producing some world class dessert wines, including ice wine well as Slovenia’s first sparkling wines, as well as fresh, dry whites that have had a penchant for collecting Decanter awards in recent years.  Podravje is officialy subdivided into two districts: Prekmurje and Štajerska Slovenija.

The wines of Štajerska Slovenia reflect the Germanic influence the region has often fallen under, so you’ll find an abundance of Riesling here, under the names Laški rizling and Renski rizling, as well as Traminec (Gewurztraminer), Sauvignon and Šipon, a personal favourite of ours. Also keep an eye out for the ranina, which is only produced in this area. The rich opoka soil is a blessing for winemakers, and also gives the district’s wines their distinctive minerality. The vineyards around Jeruzalem and Radgonsko Kapelske Gorice are especially notable, with the latter famous for its penina (ie sparkling wines). When in the area don’t miss the chance to visit the World’s Oldest Vine in Maribor city centre, the only plant in the world with its own museum. Another symbol of the long tradition of winemaking in Štajerska is the Ptujska Klet, or Ptuj Wine Cellar, the oldest in the country, which still produces wine under the Pullus label. It was founded in 1239 and has a maze of cellars beneath the town, which can be visited for educational tours and wine tastings. Only slightly younger is Vinagova Klet, or Vinag Wine Cellar, which lies below Trg Svobode in the centre of Maribor. This is one of the oldest and largest cellars in Europe, where more than 250,000 bottles of the best vintages are kept in the archives.

Prekmurje is found in the far northeast corner of Slovenia, wedged between the borders with Austria, Hungary and Croatia, and much of the winemaking activity here takes places in the areas of Lendava and Goričko. The landscapes are quite breathtaking, with forests and rolling hills covering much of the countryside, while the pace of life is noticeably slower and more relaxed than most other places in the country. When it comes to wine, dry and semi-dry white wines are most typical, with Laški Rizling (Italian Reisling) the most widely produced, followed by Chardonnay, Sauvignon and Renski Rizling, as well as Pinot Blanc, Pinot Gris, Kerner, Rumeni Muškat (Yellow Muscat) and Traminec (Traminer), while red wine production only amounts to some 3% of the total. 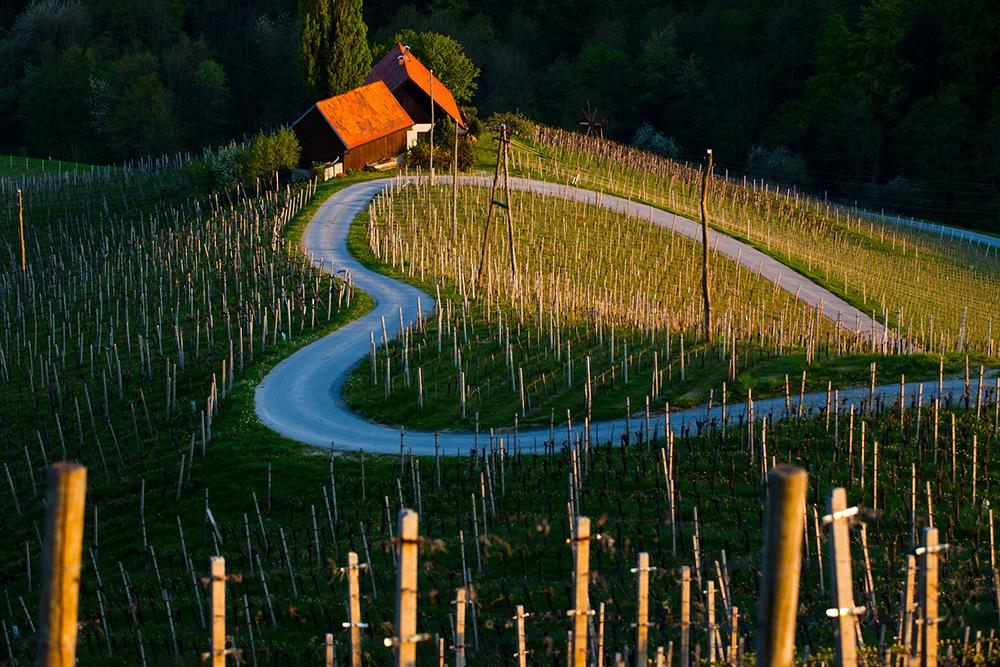 Primorska (or the Slovenian Littoral, as it is sometimes translated in English) is the most developed, promoted and consequently well-known of Slovenia’s three wine regions. It has a climate that benefits from its proximity to both the Mediterranean and the Alps, meaning the area is sometimes called the Slovenian California. Its four districts are Goriška Brda in the north, Vipavska Dolina (the Vipava Valley) further south, Kras (Karst) along the border with Italy, and Slovenska Istra (Slovenian Istria) in the area on and adjacent to the coast.

Goriška brda is one of Slovenia’s foremost wine-growing areas, and only an hour’s drive from the capital city of Ljubljana. Often described as a miniature version of Tuscany, most of the vineyards are smaller family-run operations, and almost all offer some combination of wine tastings, tours, meals, accommodation and of course wine sales. The region is also known for its traditional Italian-influenced cuisine, and a trip to Brda without enjoying a slow multi-course meal on a terrace overlooking the vineyards almost defeats the entire purpose.

Viticulture is, in fact, the main agricultural sector in this fertile Vipavska Dolina. The small, family-based vineyards are mainly concentrated on terraces in the higher areas where the excellent soil allows both white and red varieties to be cultivated. Its unique location gives rise to five micro-regions and as many characteristic wines. Grapes from the Zelen and Pinela variety are used to make the crisp white wine that the district specialises in.

The Kras wine district is distinguished by the unique terrain upon which it sits, namely, a limestone Karst plateau above the bay of Trieste covered by a thin layer of reddish-brown soil that receives both an abundance of sun throughout the year, as well as strong wind known as the Burja. The end result is the perfect climate for growing a variety of grapes, especially those for making earthy red wines such as Refošk (Refosco) and Kraški Teran (Terrano), while the dry air also provides excellent conditions for the production of cured meats, widely regarded as Slovenia’s best. With so many different wine producers located in this one compact area, the so-called Kras Wine Road can keep visitors happily busy for days on end. While many different wines are produced here, the most typical of the region is Refošk, a red that pairs well with food and shows considerable variations depending on the terroir. Other reds include Cabernet Franc, Cabernet Sauvignon and Merlot. The main white wine is Malvazija (Malvasia), which is said to be richer than that from other areas. Its light and lively character make it very popular when served chilled in the summer.

The smallest of Slovenia’s wine regions Posavje (or the lower Sava river valley) is divided into three districts, from the biggest one of in Dolenjska region, to the two smaller districts of Bizeljsko-Sremič and Bela Krajina.

The historical region of Dolenjska covers the entire Posavje wine region, while the wine-growing district is more modest in size, it is still the third largest district in the country, after only Štajerska and Vipava. Dolenjska is synonymous with one variety, namely Cviček, which is only one of two Slovene wines that boast official EU protection, but also divides opinion amongst Slovenes – locals are known to drink it as liberally as water, while others tend to find it a bit on the sour side. You’ll definitely want to give it a try and decide for yourself, and there’s no better place to do so than the Embassy of Cviček, in the tiny village of Raka south of Krško.

Bizeljsko-Sremič and Bela Krajina are located along different segments of the Croatian border, and are two of the more charming places to visit in Slovenia. This region is renowned for special winegrowing features, such as small cabins in vineyards (zidanice), where you can also spend the night.  While Bizeljsko-Sremič may not be one of the country’s more known or visited wine districts – in fact it might very well be the least known and least visited – it’s not only one of our personal favourites, but is also a permanent fixture on any itinerary of Slovenia we prepare when family and friends visit from abroad. Modra Frankinja, Laški Rizling, Sauvignon and Chardonnay are the dominant varieties grown here, and there are a few award-winning producers, most notably the sparkling wines of Istenič. Nature reserves cover most of the territory, and are perfect for a post-meal or post-tasting stroll, while the one-of-a-kind repnice wine cellars, dug by hand into sandstone hills, are also a must see on any visit.

When you see the Bela Krajina wine-growing district, you’d be forgiven for thinking that it’s somewhat peculiar looking – as it mainly consists of the hills surrounding the town of Metlika along the border with Croatia, with a narrow strip of territory extending down through Semič and into the town of Črnomelj. The pride of the microclimate is the local blend known as Metliška Črnina, made from at least 60% Modra Frankinja (Blue Franconian) and 30% Žametna Črnina, which is a dry ruby-red that has a rich, velvety flavour.