Home GASTRONOMY CHEFS What does Marko Pavčnik think about the Michelin in Slovenia? 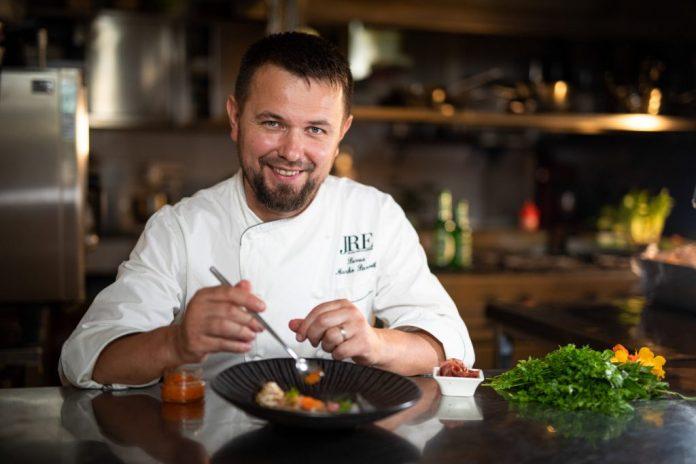 Marko Pavčnik was first made head chef at the age of 19 at various restaurants that thrived while he was cooking, and in 2011 he took over Castle Tabor.

Today we asked Marko Pavčnik what he thinks about the arrival of the Michelin Guide to Slovenia.

After the training period, he worked in many restaurants – climbing the ladder of kitchen hierarchy. Marko Pavčnik entered several competitions at the Slovenian Convention of Catering and Hospitality and is successful in winning silver and gold medals. His success doesn’t go unnoticed and he was invited to join the Culinary Olympic Team of Slovenia. He won two gold medals and two bronze medals with the Olympic team in 2010. In 2013 Grad Tabor where Pavčnik cooks at, was invited to join Jeunes Restaurateurs d’Europe. His cooking philosophy is to cook from local, traditional sometimes even wild ingredients, and using modern cooking techniques, try to emphasize the flavor of the ingredient, get new textures, new combinations. Marko Pavčnik is always looking for full flavors of the plate.

THE: What do you think about the arrival of the Michelin guide to Slovenia?

Marko Pavčnik: “I believe that Michelin will put Slovenia on the culinary map because it is the most powerful and important guide in gastronomy. I hope the evaluation is independent and of high quality, as we all want it to be.”

THE: What kind of an impact will the Michelin Guide have for Slovenian gastronomy?

Marko Pavčnik: “Considering that the catering is at a fairly high level, there are many good restaurants, therefore, it is time for Michelin to come to Slovenia. That our catering industry gets the promotion it deserves. At the same time, this means that we will try to be even better. However, it should be remembered that we mainly serve the guest and not the person who rates or evaluates the restaurant. We, however, will stay true to ourselves, our guests and our employees, and then the evaluators will come to the table. We hope that Michelin will recognize this too.“

We would like to thank Marko Pavčnik for taking the time out of his busy schedule to talk to us!

Find out the potential recipients of Michelin Stars in Slovenia!

BBC on Ana Roš: The chef who put Slovenia on the map

Lipica Stud Farm will open a new hotel in 2022

At Lipica Stud Farm they are renovating the hotel and restaurant Maestoso. Hotel Maestoso Lipica is a perfect active hotel in the middle of...
Read more

Get the latest information about Coronavirus in Slovenia here. Slovenia has tested over 1,537,000 people in the last few months since the epidemic with...
Read more