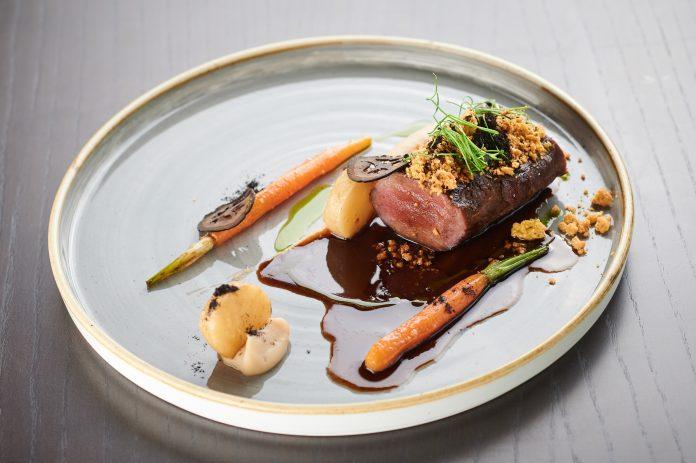 Find out which top 10 restaurants from Thermal Pannonian Slovenia are the finalists at The Slovenia Restaurant Awards 2020!

We would like to congratulate the top Slovenian restaurants from Thermal Pannonian Slovenia!

Eastern Slovenia is a land of wide, open fields and rolling landscapes, storks, wind-rattles, floating mills, healing waters, energy points, picturesque rolling vineyards, unique traditions and dialects, and, most importantly, it’s home to warm and hospitable people. This landscape is rich in natural thermal spas that will strengthen and re-energize you. Discover the friendliness and hospitality of tourism farms, where you can taste local delicacies or enjoy in high-end restaurants and spoil your senses. All of these Slovenian restaurants are also eligible to be featured in the Michelin Guide Slovenia or even to receive the first-ever Michelin Star in Slovenia!

Enter gastronomic adventures through harmonies of selected natural tastes of your or our choice. Let images speak and invite for themselves!

This ‘gallery of flavors’ is aptly named, as its young, passionate team creates works of art on a daily basis in a truly unique atmosphere. Set on the grounds of Novo Celje Mansion, surrounded by hops fields near Žalec in the Lower Savinja Valley, their philosophy is centered on the artful coalescence of various dichotomies – namely, urban and wild, modern and traditional, local and global – which would sound slightly pretentious if it weren’t pulled off with such sincerity, aplomb, and undeniable culinary acumen. All of which was duly recognized at The Slovenia Slovenia Restaurant Awards in 2018, when Galerija Okusov took home the inaugural Vox Popoli prize as the most popular choice of the public.

located in the very center of the historical city Celje, which is known after the powerful Counts of Celje, the most important late medieval noble family on the territory of present-day Slovenia. Our coat of arms with the three golden stars on a blue background is inherited from that period. The catering industry takes place at this location for many years, some have succeeded, others failed and made room for us. Tavern and pub Stari pisker opened its doors on October 2012. They have completely overhauled our food & drinks menu as well as altered the whole building to suit our vision and goals. Their vision is very straightforward and has proved to be effective. We offer high quality and distinct culinary experience with matching drinks.

Their gourmet burgers and BBQ ribs are known country-wide as is their offer of imported and domestic aged steaks. They are constantly innovating, experimenting and implementing knowledge from their great grandmothers with new culinary trends.

A Prekmurje institution that’s been passed down through four generations of the Rajh family, Gostilna Rajh has managed to maintain their tradition and passion for food. Truly a family endeavor, the family’s grandparents are still involved in the restaurant, with both the grandmother’s and mother’s traditional Slovene recipes still lovingly being used today. They are popular with both locals and gourmet lovers, reflecting their achievement of weaving new innovative approaches with their rich heritage. The interior is now also a medley of both traditional Slovene and modern, with wooden panels and one glass wall having black silhouettes of pigs printed on it.

Sat between Celje and Novo Mesto, Gostilna Repovž is the epitome of comfort. A family affair with over a hundred years of tradition already behind it, the richness of the countryside is multiplied by an awareness of knowledge of food and wine added to superb ingredients straight from the most ecological of farms making a terrific experience all round. Wine is produced in its own vineyards, and there is even three-star accommodation on site for those who fancy drinking more than just a sample.

Gregor Vračko’s Hiša Denk should be a permanent fixture on the gastronomic bucket list of any self-respecting foodie visiting Slovenia, or the wider region for that matter. The famed chef has a much deserved reputation for being quite an eccentric – both in and out of the kitchen – and a culinary curriculum vitae that few in the country can rival. He earned his proverbial stripes, or perhaps more appropriately his chef’s whites, working in prestigious kitchens across Europe, eventually ending up in California at Thomas Keller’s French Laundry, long-hailed as one of the best restaurants in the world. Upon returning to Slovenia, Gregor breathed new life into the traditional family gostilna in the village of Zgornja Kungota near Maribor, and the rest as they say is history.

Nowadays Hiša Denk’s premises match the 21st-century food, boasting a modern building constructed in minimalist Scandinavian style, with copious amounts of exposed wood and lots of glass. The individual dishes also have an unmistakably New Nordic cuisine look to them, and might be the closest you’ll get to eat at the legendary Noma without booking a ticket to Copenhagen. Of course, all the ingredients are locally sourced and perceptible homage is paid to regional Štajerska culinary traditions if you look close enough. There’s no menu, so ordering consists simply of choosing the number of courses and leaving the rest up to the chef and the British-born sommelier if you’d like perfectly paired wine with your meal. Increasingly becoming known beyond Slovenia’s borders, Hiša Denk conveniently offers a handful of elegant, minimalist rooms for overnight guests, which are both a great value and the perfect way to round out the experience.

Considered by those in the know as one of the best restaurants in the region, if not the entire country, Ošterija Debeluh and acclaimed head chef Jure Tomič have built up a well-earned reputation for innovative, beautifully presented and most importantly delicious dishes. With their main focus always on simple, clean and seasonal flavours, the unassuming Debeluh is styled as a quaint French countryside restaurant, and the atmosphere is intimate and warm, with antique chandeliers, candles and framed paintings. The decor reflects the dishes, both being a combination of tradition and modern elegance. There’s an equally impressive wine list, compiled in part by Tomič, who has also previously been named Slovenia’s sommelier of the year.

If you’re looking for a truly unique and romantic dining experience, why not hike up to Tabor Castle on the hill that overlooks the town of Laško. Dating back to the 11th century, the castle was in ruins for nearly two hundred years until the Laško Brewery rebuilt it in the mid-1980s.

Set in the hills high above the town of Krško, with breathtaking panoramic views and an exceedingly peaceful atmosphere amongst the vineyards, the stunning estate dates back to the 19th century when it was first established by the powerful Counts of Attems from nearby Brežice. It’s been a well-known traditional restaurant and guesthouse for more than three decades, but new owners and modern renovations have put it in a class of its own in recent years. Young chef Dejan Mastnak prepares some exceptional modern dishes that are based on local ingredients and simple homemade flavors. The tasting menus (and advanced reservations) are highly recommended.

Alongside the former rural carrier road between Radgona and Maribor, there is a restaurant, where you can quench your thirst and have a good meal. It all began in 1870 when Mihael and Ana Schiker began the story of domestic carriage drivers’ restaurant, which soon became popular among locals and travelers. The wealth of knowledge was passed down from generation to generation, and that is why we are famous for our traditional Slovenian dishes. The house still looks rustic on the outside, while it is discretely modern on the inside. Individuals, couples, groups of friends or business partners, families with friends and children can enjoy their time among barrels and bottles in the two-centuries-old cellar, dining rooms, a special family room, or in the beautiful summer garden, while the children can have fun in our playground.