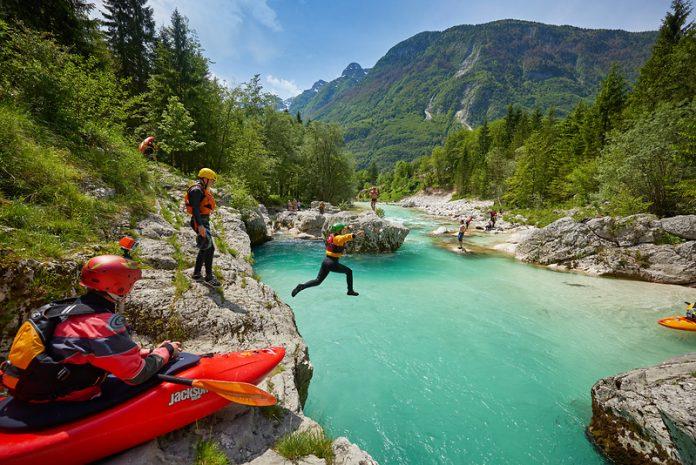 Travel to Slovenia and experience the incredible Slovenian nature. Diverse flora and fauna and dynamic landscapes invite you all year round.

Find out the top facts about Slovenian nature with us!

Triglav is the highest mountain peak, not only in Slovenia but also in the whole Balkan region.

Triglav measures 2864 meters. The first ascent to Mount Triglav happened exactly 242 years ago. Triglav is also featured on the Slovenian flag and it remains one of the most important national symbols.

More than half of the country is covered with forests, making Slovenia one of the greenest countries in the world.

Slovenia is a country of forests, which cover almost 60% of its surface. In the percentage of forest cover, Slovenia comes in third place in the European Union, after Sweden and Finland. Slovenians feel strongly connected with the forest. Talk about keeping it green in Slovenia.

Škocjan caves has one of the largest underground canyons in the world.

Škocjan Caves is a cave system in Slovenia. Due to its exceptional significance, Škocjan Caves was entered on UNESCO’s list of natural and cultural world heritage sites in 1986.

Slovenia has almost 30.000 km of rivers and streams.

The crystal-clear waters of Slovenia’s rivers are beautiful to look at and even more fun to play in. Treat yourself to a moment of relaxation along and on the rivers. Slovenia has almost 30.000 kilometers of rivers and streams, the highest in Europe compared to the surface area.

The most popular river is the River Soča. When you visit this emerald green river in the middle of the summer heat, it will feel like you are breathing in all of the freshness provided by the surrounding woods.

The most visited attraction is the Postojna Cave, which also the biggest and the longest cave system in the world.

The most visited tourist cave in Europe is a place where the proteus or olm offspring are once again hatching. Postojna Cave is the only karst cave with a railway, which was built more than 140 years ago. Thus far, more than 38 million visitors from all over the world have seen Postojna Cave. They began their visit at the departure platform of the unique cave railway. A 5-kilometer subterranean trail is available for tourist visits. The train has also been adapted for disabled access.

Postojna Cave boasts incredible subterranean halls. In one of them, the largest live nativity scene in the subterranean world can be seen at Christmas time. More than 500 performers put on this Christmas show among stalactites and stalagmites.

Slovenia has only 46.6 kilometers of coastline

Slovenia’s Adriatic coast is just 46km long – but like the rest of the country punches well above its weight in the number and quality of attractions it offers. If you decide to visit the Slovenian coast, you certainly won’t be bored. Take a stroll through charming coastal towns, wander around quaint inland villages and spice up your holidays with countless active adventures

There is a lake that disappears seasonally. Lake Cerknica is an intermittent lake

The lake Cerknica has first been mentioned in antiquity, while from the 15th century onward, it has appeared on the maps of Europe Lake Cerknica is said to be one of the largest intermittent lakes in Europe and is the largest lake in Slovenia when it is filled with water. When it is filled to the brim, its surface area measures a mighty 30 square kilometers. The water usually stays in the karstic filed for up to nine months of the year. Heavy seasonal rains are known to fill the lake up in a couple of days, while the waters seep away for many weeks.

Vrtiglavica, a karst shaft in Slovenia, features the longest straight vertical drop in the world

Vrtiglavica, also has one of the tallest underground waterfalls. It won’t surprise you to learn that the Slovenian word “vrtiglavica” translates to “vertigo”.

A whopping 216 square kilometers of Slovenia are covered in vineyards.

Slovenia has many vineyards. It is claimed that there is a vineyard for every 70 people. The oldest vineyard is from Slovenia. It grows in Maribor.

There Are Three Climate Zones In Slovenia

The unique nature is what makes Slovenia special. In a single day, you can take a morning walk in an autumnal forest, bathe in the Adriatic in the afternoon, and go skiing in the evening.

Slovenia has it all: the Alps, the Mediterranean, the Pannonian Plain, and the Karst. Even though it’s small it’s one of the most diversified countries in Europe!

Slovenia is home to 260 waterfalls

Did you know that waterfalls generate positive vibes? Waterfalls are considered to be one giant ion generator – the vitamins in the watery air give off negative ions, which we take in as positive energy. One more reason to visit one or five Slovenian waterfalls, right? As if you actually needed an excuse to visit one of our beautiful waterfalls. Just check the photos below!

Slovenia is also a country with above-average biodiversity

Active since the 13th century, the Sečovlje Salt Pans now produce salt in order to preserve natural and cultural heritage. In these northernmost Mediterranean salt-pans, salt is still produced traditionally, with classical salt-pan methods and tools, which is the reason why salt has retained its very special taste and exceptional characteristics.

The area of the Sečovlje Salina Landscape Park covers some 1,600 acres. The saltworks represent the largest Slovenian salt evaporation ponds and are home to number plant and animal species, up to 270 species of birds.

Slovenia has around 10,000 caves and underground systems. The two most visited caves in Slovenia are Postojna Cave and Škocjan Cave. Did you know there are almost 100 new caves discovered in Slovenia every year? Talk about a lot of caves! Around 20 caves in Slovenia are opened to tourists, which is not a lot compared to the number of caves.

Have you been to Slovenia yet? What did you like the most? Let us know in the comments below!