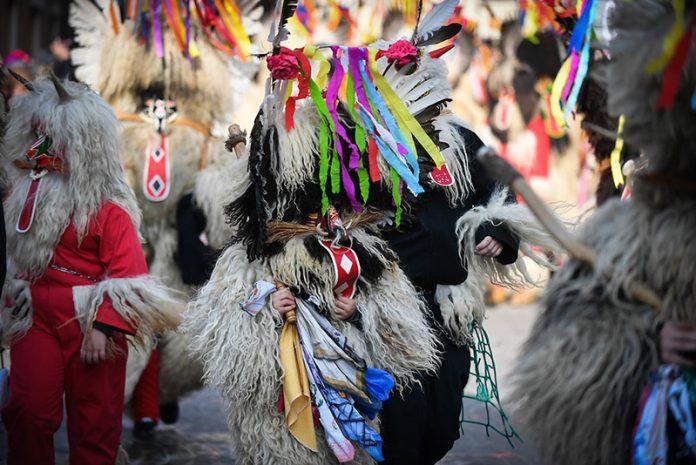 TOP Slovenian tradition: Scare away winter with Kurents in Ptuj

Seeing large hairy sheep monsters dancing around might sound strange, but don’t worry, you’re not having a real nightmare. These folkloric figures are called “Kurents” and they’re meant to look terrifying in order to scare off winter and evil spirits.

But where do Kurents come from and what do people do during the many festivities at Kurentovanje? Read below about one of the most famous Slovenian traditions, which brings many joyous and colorful moments across the entire country! 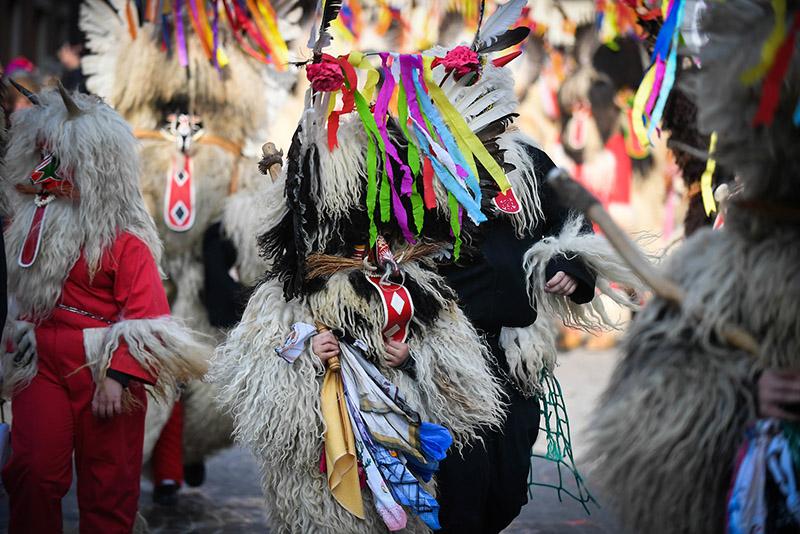 Kurent or Korant is Slovenia’s most popular traditional carnival figure. Its origins have still not been fully explored, but according to an ancient belief, Kurent is a demon chasing away winter and summoning spring to the country.

Its origin has still not been completely understood, although there are some hypotheses associating it to the Illyrian and Celtic tradition, to the mythical followers of the goddess Cybele worshipped on the territory of Poetovio in the late antiquity, to the Slovene ancestors, to the establishment of Uskoks (Croatian Habsburg soldiers) in the 16th century, and many more. Similar traditions are found throughout the region, in parts of Croatia, Hungary, Serbia, and Bulgaria.

Every year between Candlemas and Ash Wednesday, this magical traditional figure emerges in the surroundings of Ptuj. Small groups of Kurents visit houses, bringing them luck and bountiful harvest. During Kurentovanje, Kurents try to scare away the winter in a special ritual, also known as the burial, and celebrate fertility on Shrove Sunday. 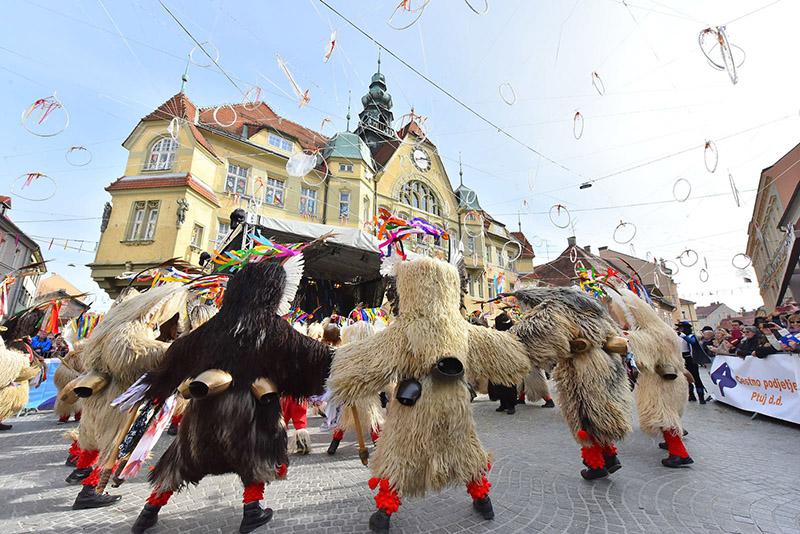 Kurent’s costume is rather simple: a sheepskin hat and outfit, cow bells hanging from a chain belt, red or green wool socks and black boots. However, the making of the Kurent’s mask is not simple at all and the making of it is considered to be a major folk art in Slovenia. There are only two masters of Kurent masks left – Master Klinc from Spuhlja and Master Zelenik from Markovci.

The most prominent part of the Kurent’s outfit is the head-mask which also makes Kurents different from each other. The ones on the Ptuj field have the ears made of turkey or goose feathers and horns made of straw or wood wrapped in leather and decorated with colourful paper flowers and ribbons.

On the other hand the ones from Haloze and villages on the Drava field wear genuine cow horns and ears of either sackcloth or leather. The facial part made of leather is sewn in the head-mask bearing holes for eyes and mouth. The teeth are made of white beans threaded on a string. A trunk-like nose is attached along with whiskers made of twigs. A rather long tongue is made of fabric or leather.

A wooden club that Kurents brandish in their hands is covered with hedgehog skin at one end. The outfit of Kurents is called “kurentija” and is nowadays made of sheepskin. However Kurents from the village of Okič in Haloze, for example, have coats made of rabbit or even goat skin.

Kurentovanje – fun for the whole family

aking its name from the Kurent, Kurentovanje is a carnival like no other. If you are in Slovenia around this time make sure you visit Kurentovanje! Trust us you won’t be sorry.

The Carnival was admitted into the European Federation of Carnival Cities (EFCC-FECC) in 1991. And lets not forget that in 2017 the Door-to-door rounds of the Kurent were inscribed on the UNESCO representative list of intangible cultural heritage of humanity.

Kurentovanje is one of the most popular and ethnologically significant Slovenian events. The carnival events usually last for about 10 days and are scattered across the country. The biggest celebration is held in Ptuj, the oldest Slovene city, which attracts more than 100.000 visitors from all over the world each Spring. This year will mark the 60th International Carnival Festival in Ptuj. Therefore, expect the event to be bigger than ever!

The beginning of the carnival in Slovenia is not far away. On 2nd of February at midnight, the Kurents jump will take place in Ptuj, where the ploughmen will plough the first furrow. Kurents will put on their bells for the first time and dance by the fire. With this ritual they begin to drive away the winter and call for spring, happiness and good harvest.

Ptuj Castle also lives throughout the year with the carnival. There you can see the permanent collection of traditional masks, among which you can also find kurents and become familiar with the habits connected to the carnival.

Ptuj isn’t the only town which holds the traditional Kurentovanje. During the Carnival season, Cerknica transforms into one of the most vibrant carnival towns in Slovenia. The Cerknica parade is known for massive Carnival masks, such as Ursula the Witch, Jezerko the Lake Man, the Giant Pike Fish, the Dragon, Liza the Witch, and Butalci. Events in Cerknica begin on Fat Thursday with a traditional sawing of the witch. On Shrove Sunday, Shrovetide masks and characters parade on the streets of Cerknica. A feast for the eyes!

In addition to the traditional Carnival costumes, you can find carnival masks and Shrovetide parades in many large towns. Visit Ljubljana Dragon Carnival, where a large green dragon walks along the streets of the city centre, followed by various Carnival masks usually linked to a selected theme. On the coast, the winter is chased away by Carnival figures at the Istrian Carnival. A large carnival celebration is organised annually at the central square in Maribor. On the streets and squares of the old town centre of Kranj, you can join in the Prešeren Carnival.

You will be able to see many masks and figures dressed in costumes, during this time walking around on the streets. Be a part of this fun tradition and dress up as well! The festivities will be even more fun like if you “dress the part”. 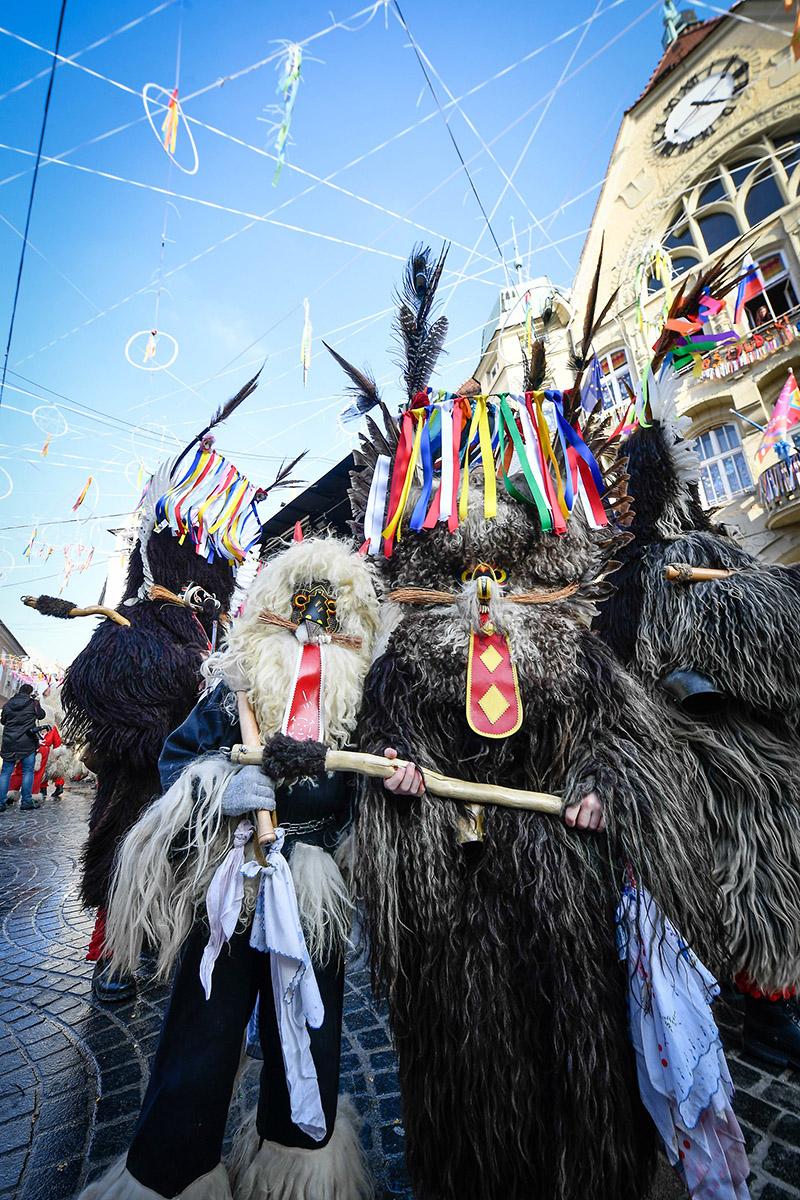 Kurentovanje is also known as the time of the year when people munch on delicious treats called “krof”. Krofi are also known as doughnuts, traditionally filled with marmalade and covered with sugar. They look a lot like fried dough balls, which smell amazing and bring joy to everyone during the festivities.

The origin of doughnuts doughnuts goes back to imperial Vienna, where court chef Cecilija Krampf was the first to start making them. Cecilija’s recipe gradually spread throughout the entire monarchy meaning the recipe also made its way to Slovenia.

Slovenian doughnuts were somewhat different from the ‘imperial’ ones according to the method of preparation, size and fillings. While doughnuts were fried in melted butter in Vienna, our ancestors fried them in lard and later in oil. Original doughnuts were of irregular shapes with protuberances like claws, from which they got their name. They were also called “fanclji”. 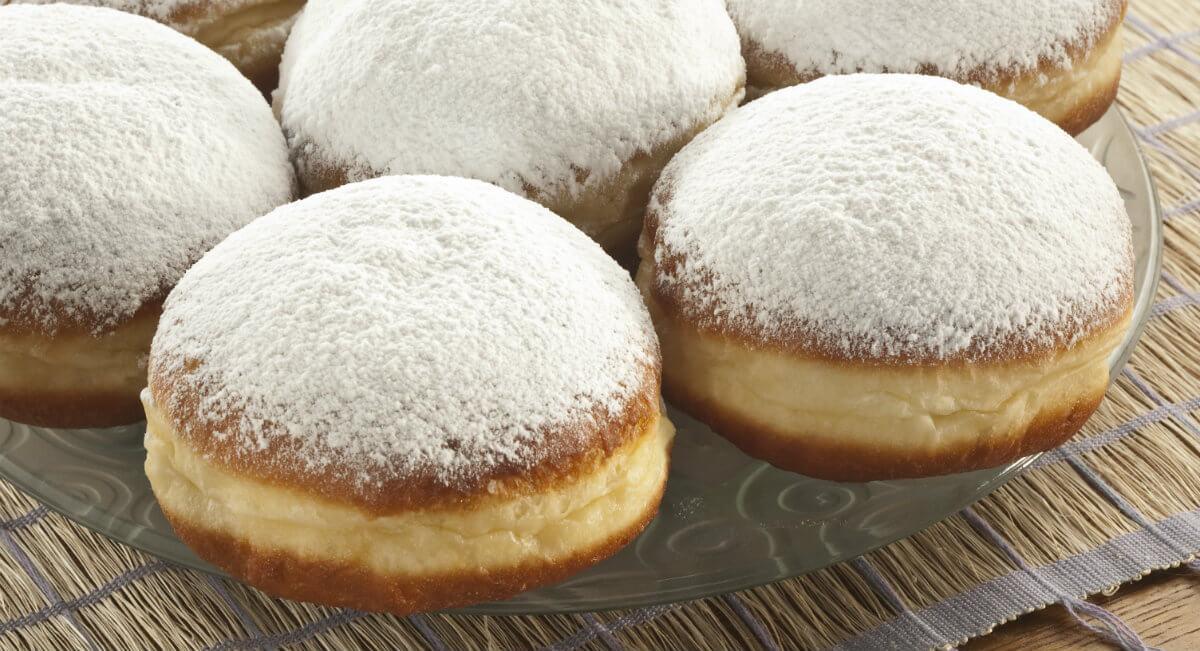