An alpine fairytale come to life

f there was a tick sheet of things a tourist or traveller would want from a place based purely on aesthetics, it would probably run something as such; big blue lake, idyllic island, iconic church, domineering castle atop a hill. Lake Bled has all of this, with the added bonus of the church sitting proudly in the middle of the island. It is one of the most popular destinations in Slovenia, and for good reason.

Traditional wooden boats – pletnas – have been taking visitors to the island in the middle of the lake for centuries. These boats are operated by standing rowers known as pletnars. After landing, guests climb 99 stone steps to reach the Assumption of Mary Church. On this island, which is the subject of legendary tales, listen to the church bell and ring it yourself. Legend has it that this will make your wishes come true. As you return to the lake shore, view the island on the lake from the castle or from the walking and horse-carriage trails that lead you around the lake. Take a ride with Bled coachmen, known as fijakers!

Of the many aesthetic wonders of Lake Bled, it is Bled Island (Blejski Otok) that is without doubt the most memorable. It adorns the cover of this and pretty much every other guide dedicated to Bled, and a large chunk of guides for the entire country, and with good reason. It is the only true island in the entire country after all. It certainly isn’t huge, but the phrase ‘small but perfectly formed’ has never felt more apt. It is only accessible by boat, but we truly can’t think of any mode of transport we’d rather use to reach it.

The Church of the Mother of the God on the Lake (mouthy name, but rather poetic in Slovene) dominates the landscape, both visually and culturally. First mentioned in the 12th century, it has a history that stretches way before that and has undergone many renovations since. Thousands head to ring its Wishing Bell annually, which is purported to bring luck to those that ring it. USA Today included it in its list of the beautiful churches in the world, for quite obvious reasons.

The church bell, made in the early 16th century, is said to have come from the pope himself. The story goes that he gave it to the church after the original bell, sent to the island by an inconsolable widow in remembrance of her late husband, ended up sinking to the bottom of the lake in a storm. So, Bled really has a pair of legendary bells: the one in the church and the one on the bottom of the lake. The legend about the sunken bell is brought to life every year by a special Christmas event. 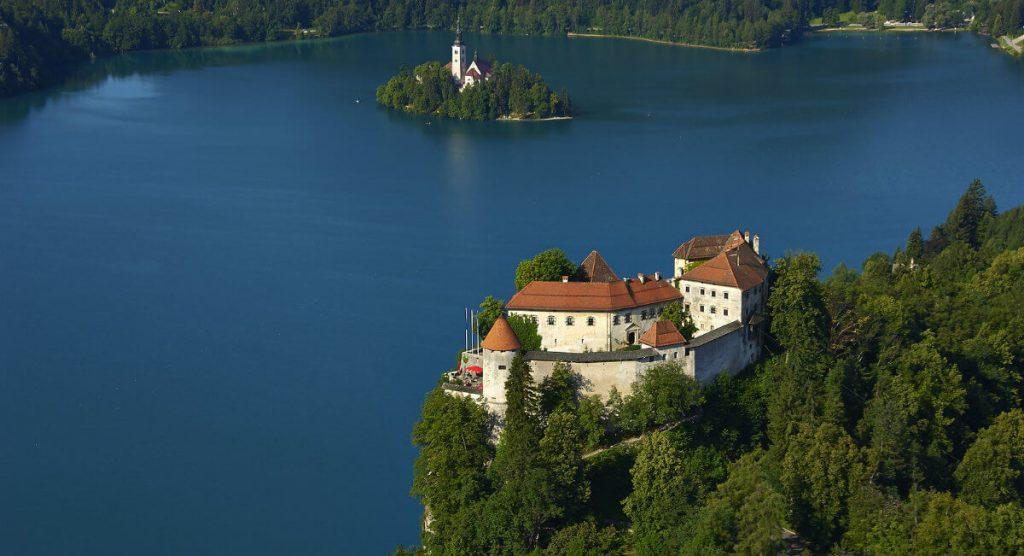 Perched quite dramatically high up on a cliff overlooking the lake and town, Bled Castle is the stuff of children’s dreams. First mentioned in the year 1011, it is officially the oldest castle in Slovenia having celebrated its one thousand year anniversary in 2011. Built and added to haphazardly over the centuries, nowadays the castle is a photogenic mash of styles. Of the many sights located on the castle’s premises, you can visit a small but informative museum of the region’s history from the first human settlements till the present day, a 16th century chapel, the wine cellar, an herbal gallery, a recreated Gutenberg printing press (that still sees heavy work printing souvenirs for visitors) and of course a restaurant with breathtaking views of the lake below and mountains beyond.