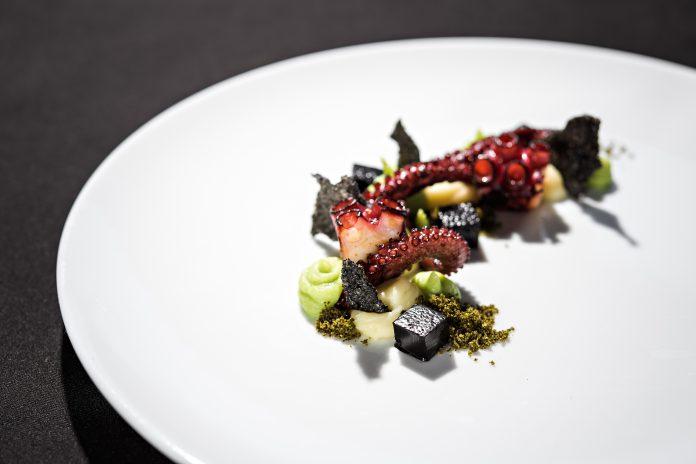 Only once a year the culinary enthusiasts can experience, not just see but also taste, all the very best that Slovenian gastronomy offers at the moment. And that happens during the unique event of The Slovenia Restaurant Awards.

And what exactly is “The Slovenia Restaurant Awards” you might ask. To answer the question we went straight to the source or better said to the person behind the first innovative, independent and national selection of the best Slovenian restaurants, Niko Slavnič. His ideas are without respite. He’s a serial entrepreneur, MBA lecturer, business angel and also the CEO of the storied international travel media company The Slovenia. Four years ago, he was the first initiator and organizer of the popular selection of the best restaurants in Slovenia, known simply as The Slovenia Restaurant Awards.

Niko Slavnič explains: “In early autumn 2016 we started the selection of The Slovenia Restaurant Awards with the help of some professional International and Slovenian enogastronomy and tourism experts. Now each year we organize an exclusive event, where we reveal all the best restaurants in Slovenia.” On who the selection of the best Slovenian restaurants is for he says: “Food and wine tourism is becoming the fastest growing sector of the tourism industry, both around the world and in Slovenia.” This comes to no surprise really, as Slovenia is becoming one of the top tourist destinations (in 2019 Slovenia had 6,23 million visitors from all over the world, which translated into 15,75 million overnight stays) alongside being named as the gastronomic region of 2021.

This year’s The Slovenia Restaurant Awards will be running for the fourth year in the row and the organizers have upgraded their basic idea on how to award the best Slovenian restaurants and their chefs alongside giving the visitors a wide choice of various experiences to choose from on the day of the event.

The activities at the simply beautiful settings of the Evergreen restaurant at Smlednik will take place throughout the day. The day will start with a proper breakfast, which will give the attendees the energy they will need to attend the Gourmet Masterclass with lectures that will include the best case studies. The Gourmet Masterclass on Digital media for the caterers with experts from several areas, from content creating to strategies, who will share their knowledge with the visitors. The visitors will surely be provided with the best advice on how to use technology and influencers to be successful in the catering business.

Continuing the event with the utmost Slovenian-style pop-up lunch with a slogan “Tastes without borders”. A good opportunity to present Slovenian traditional food and products from the so-called “Zamejci” or in translations Slovenians who live in the neighboring countries. They will present the dishes that are typical for regions from which they are coming from. This way the visitors will be able to taste Slovenia through different regions and traditions. The wine producers from the regions will wrap up the story of Slovenian tastes with their wines.

Participate in our giveaway, here.

Once visitors palates will be satisfied the very peak of the event will follow – the awards-giving ceremony for the best Slovenian restaurants and chefs of 2020. The awards will be given to the best regional restaurants in Slovenia, which will be selected based on the votes provided by the expert committee, Gastronomic Academy and the general public. For the first time since the start of The Slovenia Restaurant Awards, they will be naming the best newcomer (restaurant).

Following the award ceremony will be unique (The Slovenia) dinner. Last year The Slovenia dinner truly was a one of a kind gastronomic spectacle. The 16 awarded chefs changed into their chef’s robes and joined forces in order to prepare the exclusive dinner. The chefs presented each meal themselves in a short speech so that each visitor had the chance to hear and see who made the magic fusion of tastes that was offered on a plate. The event had a charity note as well. They raised 5,000 euros during the dinner for the Young Chef Foundation to allocate to the most promising and devoted young chef for the training abroad.

Choosing the best is not an easy task

The Expert Committee of 2020 will consist of prof. Janez Bogataj, Professor Emeritus, doctor of ethnology and professor of art history PhD, assistant prof. Aleš Gačnik, PhD, head of the Department of Cultural Tourism and Cultural Heritage at Turistica and head of the Centre for Gastronomy and Wine Culture at the University of Primorska and Yuri Barron, an international reporter and the editor-in-chief of the international publishing houses The Slovenia and InYourPocket. The members of the Expert Committee have proposed 249 restaurants.

The Committee members made their choices based on the following procedure: every member had to visit the proposed restaurant at least once during the last two years; the restaurant had to operate for at least a year. They assessed the food and beverages (the variety, quality of the ingredients, food presentation, harmony of tastes, innovative approach in combining food and drinks) as well as the service quality (greetings, serving, and ways of recommending food and drinks and the knowledge of the waiting staff). Based on all that the joint assessment of ‘’general satisfaction’’ was made after visiting the restaurant. The second round of evaluation was in the hands of expert public – that is the Academy of Gastronomy. Their marks added up to 75 % of the total assessment. At the beginning of March, the votes of the general public were distributed to the best and thus provided for the last one-quarter of the votes.

The Deloitte Slovenia Consulting finally reviewed independent evaluations of all the votes in April 2020 and they confirmed the credibility of the results. Hiša Franko, Vila Podvin, Gostilna pri Lojzetu – Dvorec Zemono were announced as the best three restaurants last year. The winners were excited to get the awards but also understood their responsibilities for the future. This year’s results and winners will be announced soon.

To be the best does not give you a space to relax, but demands even deeper reflection on what and how to offer to the potential guests. So that they do not just stop by but keep coming back again and again.

Next time you try to make your decision where to go for a good meal, dinner or just a quick refreshment, look for a tip that the list of 100 best Slovenian restaurants, according to the established experts and general public, can offer. The list is dearly cherished at The Slovenia Restaurant Award and included in this magazine.

The Slovenia Restaurant Awards 2020 event will be held on the 5th of May at Evergreen, Smlednik.