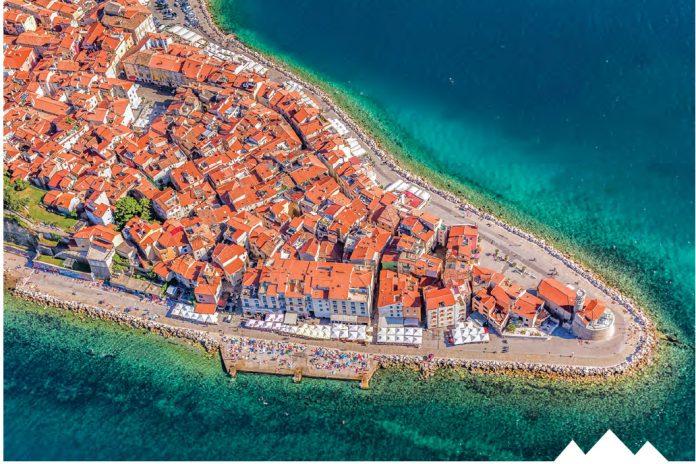 Piran is to Adriatic what Bled is to the Alps and Slovenia as a whole is to Central Europe: tiny, friendly, overwhelmingly picturesque. It’s a town that is almost impossible not to fall in love with on your first visit, and if you only have time for a day trip you’ll likely want to make plans to return. Despite its modest size, Piran is awash in superlatives. It boasts what is undeniably the country’s finest square, the 19th-century Tartinijev Trg named after the composer Giuseppe Tartini, and what has to be one of the most dramatically situated churches anywhere in Europe, St George Cathedral and its spectacular bell tower perched on the hill overlooking the town and the sea.

In addition, its numerous restaurants not only turn out some of the best seafood we’ve ever eaten, but also serve it in some equally unforgettable settings. Metre for metre this petite Venetian port can hold its own against anyone, including the imperial capital just over the horizon that was responsible for much of its fortune through the salt trade. In fact, it’s commonly said that the town was built on salt.

Piran does have the same kind of open-air museum feel to it as Venice, only on a much much smaller scale. However, once you venture from the heavily trafficked waterfront and central square down the narrow back streets, past the crumbling façades of ancient villas, freshly-laundered clothes hanging from windows overhead and the odd overgrown gardens let you know that Piran should not be mistaken for some manufactured cultural Disneyland – the charms are real and, yes, people do actually live here.

1ST OF MAY SQUARE (PRVOMAJSKI TRG)
The administrative centre of Piran until the 13th century, these days the square stands in stark contrast to the glistening Tartinijev Trg only a couple hundred metres away. It is scruffy and unkempt with the odd clump of grass poking up between stones and more than one façade unintentionally revealing brick walls beneath crumbling layers of paint. It is, in other words, perfect. In addition to several restaurants, art galleries and a great little wine bar, a large stone cistern elevates nearly half the square a metre off the ground and serves as a stage for various music, dance and theatre performances during the summer. Flanking the stairs leading up to the now dormant wells are two allegorical statues representing Law and Justice, both of which are obligingly photogenic.

TARTINI SQUARE (TARTINIJEV TRG)
Already arguably the most impressive square in Slovenia, all debate was put to rest in 2008 when it was transformed into a pedestrian-only zone with outdoor cafés taking the place of parked cars. Fronted by two large neo-Renaissance buildings on one side and a mélange of smaller buildings of varying architectural styles on the other, the square itself is younger than
almost all of them, having been part of Piran’s harbour until it was filled in in 1884. Thesquare’s inner oval was given its distinctive shape when it served as the terminus for an electric railway that connected Piran to Portorož and Lucija until 1953, while its white marble surface was something of a posthumous gift to the late Tartini in 1992 on what would have been his 300th birthday. In addition to lending his name, the great composer is also represented in the square by a very photogenic statue standing near its centre.

ST GEORGE CATHEDRAL
Watching over the town and visible from nearly every open space is the massive cathedral dedicated to Piran’s patron saint, the dragon slaying young knight from Capadoccia, George. Legend has it that towards the end of the 16th century the cathedral fell into a state of disrepair, which was so troubling that Saint George himself made an appearance in order to motivate the citizenry to undertake the necessary renovations, and even blinded a sceptical mayor to show he meant business. True or not, the cathedral saw some major renovations shortly thereafter, including the addition of a nearly 50m bell tower, which is a scale copy of the San Marco Campanile in Venice. Throw in some stunning views of both the city and the sea and you have the makings for one of the most impressive churches in Slovenia.

VENETIAN HOUSE
One of the best examples of Gothic Venetian architecture in Piran, the unmistakeable palace was built in the middle of the 15th century and is the oldest residence still standing onTartinijev Trg. According to local legend it was commissioned by a wealthy Venetian merchant in order to prove the strength of his love to a beautiful young Piranese girl and win over the less than supportive townspeople. We don‘t want to ruin the ending for you, but they can probably fill you in on the details if you ask at the Piranske Soline gift shop that now occupies the ground floor.

TARTINI HOUSE
Originally going by the name ‘Casa Pizagrua’ this somewhat modest palace next to St Peter’s Church on the eastern side Tartinijev Trg was the birthplace of the composer – and namesake of roughly half of Piran – Giuseppe Tartini. It underwent extensive renovations in the late 1980s and is now home to the main offices of the Italian Community in Piran. There is also a small museum on the first floor displaying, among other things, one of the master’s violins, his death mask and various letters, manuscripts and scores.

TOURIST INFORMATION CENTRE
Boasting perhaps the best address of any tourist information centre in Slovenia, TIC Piran has the privilege of calling the ground floor of the town’s gleaming white Venetian town hall on Tartini Square home. While the interior is on a bit more humble scale than the façade would suggest, there’s a huge selection of books, brochures, maps, flyers and more from seemingly
every tourist-oriented venue on the coast and beyond. But don’t worry, the cheerful staff manning the counter can help you make sense of it all.
QTartinijev Trg 2, +386 (0)5 673 44 40, ticpi@portoroz.si, www.portoroz.si.