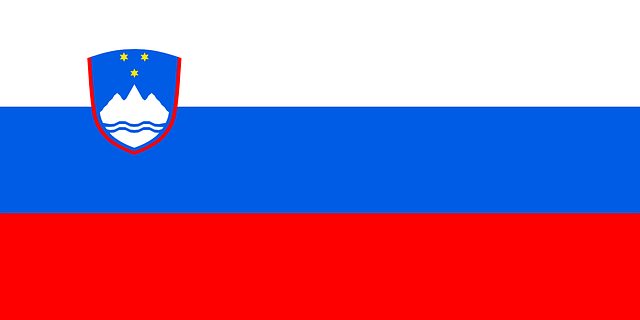 Flags of the countries are a sort of insignia and a form of country’s symbolism.

In the middle of the white and blue horizontal lines, the Slovene coat of arms is located. The coat of arms is a shield with the image of Triglav, Slovenia’s highest peak, in white against a blue background at the center; beneath it are two wavy blue lines representing the Slovenian part of the Adriatic Sea and Slovenian rivers (such as Soča, Sava, and Drava), and above it is three six-pointed golden stars arranged in an inverted triangle which are taken from the coat of arms of the Counts of Celje, the great Slovene dynastic house of the late 14th and early 15th centuries that lived in the city of Celje.

The colors of the Slovenian flag are considered to be Pan-Slavic, however, they are actually from the medical coat of arms of the Carniola.

The last change to the current Slovenian flag design was in 1991.

First rise of the Slovenian flag

In addition, Austrian authorities saw all tricolors on the Slovenian flag as nationalist and potentially revolutionary symbols, so Austrian and German provinces were only allowed to use bicolors. Raising of the Slovenian flag in Ljubljana was somewhat seen as a major achievement in 1848 and it quickly became the symbol of United Slovenia.

In the second half of the 19th century, the Slovenian flag with its tricolor became an all-Slovene symbol, with which the Slovenian population was represented.

Slovenian flag was recognized and associated with the country also during the country’s incorporation into Yugoslavia. Keep in mind, at the time all the countries under Yugoslavia had the same flag and had to use the flag of the kingdom.

Slovenian flags during and after WWII

During the World War II, the Slovenian national colors were used both by the Partisan Resistance Movement (usually with a red star in the middle) and by the Slovenian Home Guard, the voluntary anti-Communist militia, which was sponsored and supported by the Nazi German occupation forces.

In the year of 1945, a red star was officially placed on the flag of the Socialist Republic of Slovenia, a constituent of Socialist Yugoslavia.

Now that you know everything about the Slovenian flag, you can start learning Slovene with us!