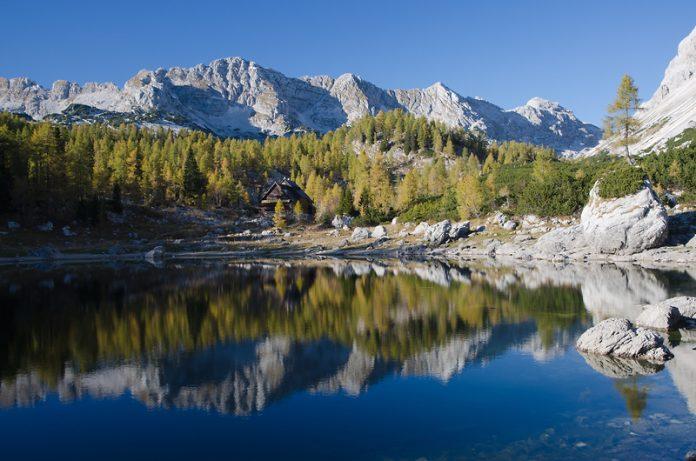 Triglav lakes are located in Alpine Slovenia where you can experience magnificent views of Alpine valleys below.

The trails in Triglav National Park will take you up to the highest Slovenian mountains, most picturesque lakes and will offer you breathtaking views of Slovenia.

Discover the valley of the Triglav Lakes

The Valley of the Seven Lakes features seven permanent and a few intermittent lakes, which means the landscape of the lakes slightly changes from season to season, providing you with unique sights. You will be impressed by their natural colorfulness, also evident from their names – the Green, Brown, and Black Lake.

Coming from Bohinj, the Valley of the Triglav Lakes is accessible from Stara Fužina, from where you continue via Vogar, Mounts Viševnik and Ovčarija to the Hut by the Triglav Lakes (Koča pri Triglavskih jezerih) (1685m), which is about a five-hour walk. If you drive to Mount Blato to access the Valley via Bohinj mountain range, you save about 1.5 hours of walking.

Accessing the Valley of the Seven Lakes via Komna takes nearly 5 hours. The third possible way leads by the Savica Waterfall. After a demanding steep and winding path through Komarča, it takes about 2 hours to get to the Black Lake (Črno jezero) (1294m), and about 3 hours to the Hut by the Triglav Lakes. From the Hut by the Triglav Lakes to the Zasavska koča na Prehodavcih hut (2071m) it takes another good two hours of walking.

Although the lakes and ponds are more numerous, one usually speaks of the seven Triglav lakes listed and described below.

The Lake under Vršac is also called the Lake at Podstenje. This Triglav lake is located 1,993m above sea level and its frozen most of the year. We kindly advise against ice skating on it. Safety first.

The Pool in Laštah is a Triglav lake, located under the Zasavska koča na Prehodavcih hut. This Triglav lake is an intermittent one, which means it often dries up during the summertime. If you want to visit this Triglav lake firstly make sure that it is actually there.

The Brown Lake is located in the southern part of the glacier valley. This Triglav lake is 150 meters long, 100 meters wide, 10 meters deep.

The Green Lake is another Triglav lake located in the valley of the Seven lakes, which is famous for its green color due to green algae. The lake is relatively shallow as it is only 2 meters deep.

The Double Lake is the most famous Triglav lake. It is located next to the Hut by the Triglav Lakes at the altitude of 1,685 meters above sea level. The name double lake refers to the water level. When the water level of this Triglav lake is high, the two lakes turn into one. Sounds romantic right?

The Black Lake is also known as the warmest of the Seven Lakes. However, we don’t recommend swimming in it. We advise you to follow the rules of Triglav National Park. It is prohibited to bathe or carry out any other recreational activities in the lakes. If not for the law, respect the ban because you know it is the right thing to do. Leave no permanent traces behind, i.e. bring all the trash from the mountains to properly dispose of them in the valley … Back to the lake. This Triglav lake is located at 1,319 meters above sea level, and it is 150 meters long, 80 meters wide, 6 meters deep.