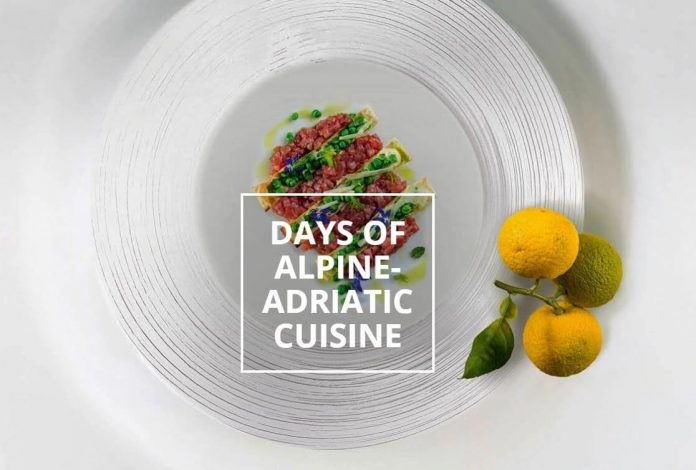 Klagenfurt invites all culinary enthusiasts and foodies to the beautiful Austrian city surrounded by the Alps to join them at the Alpe Adria Küche. From 17th till 27th of September you will be able to experience a real culinary kaleidoscope of Alpine-Adriatic tastes and meet some of the best chefs from the region.

15 guest chefs, over 45 producers, 25 restaurants, over 30 fine culinary events – these are the benchmarks for this year’s third edition of the “Days of Alps-Adriatic Cuisine”.

On Thursday, the 17th of September, Klagenfurt will host its annual event called Alpe Adria Küche, which is also known as the ” Days of Alpine-Adriatic Cuisine”. This year’s edition of Alpe Adria Küche will bring together some of the most amazing culinary talents from Slovenia.

The Klagenfurt Tourist Association is setting an example of neighborly friendship and solidarity with Slovenia and Italy. Klagenfurt is placing itself on the map as a meeting place for culinary, cultural, and economic similarities.

Each year the Alpe Adria Küche event showcases the mutual source of youth for the inspiration of regional cuisine and for the mutual transfer of regional identity across the country’s borders to countries like Italy and Slovenia. The experiences of creative chefs from the Alps and Adriatic regions are supposed to lead to new culinary creations. The motivation behind the Alpe Adria Kuche is also for the chefs to meet each other and encourage each other in the process of creating stunning plates.

Alpe Adria Kuche is also an event that brings together all the ingredients that chefs need for their day to day operations in the kitchen, which are reliable producers who, with their refined and fresh products, that put a staple on the culinary creations and plated of chefs.

This year, for the first time, culture and culinary art meet in delightful jam sessions. For example, when the culinary-cultural-literary mix of the city is discussed in the Kammerlichtspiele during a Trieste evening and samples are served or when musicians and young wild cooks have an evening together in the Maria Saal cultural center. Or perhaps the independent scene and parts of the city theater perform and then serve delicious fish soup. Or when the author Lojze Wieser celebrates the culinary friendship between Carinthia and Slovenia in literature and on the plate in the Landhaushof.

Top chefs will also be guests in local restaurants from September 17th to 27th and explain their philosophy of the Alps-Adriatic cuisine on the plates and how the food is a true source of inspiration that needs to be not only tasted but also felt on the plate.

On the first days of the Alpe Adria Küche culinary enthusiasts will be able to meet and taste the creations of the Slovenian Michelin star recipient Tomaž Kavčič from Gostilna pri Lojzetu – Dvorec Zemono. He will be creating a spectacular menu with 8 courses together with Stephan Vadnjal.

The next day, visitors of the Alpe Adria Küche will be able to join the discussion on “Sustainability in the culinary world”. Joining the round table on the topic will be Michelin star chef Jorg Zupan from Restavracija Atelje, Kaja Sajovic – a renowned food journalist, and Niko Slavnić – CEO of The Slovenia and father of the first national gastronomic awards in Slovenia.

On the 22nd of September, event-goers will be to experience a fun culinary night alongside brothers and incredibly talented chefs David and Gregor Vračko, from Hiša Denk and Restavracija Mak. The pair rarely cooks together, despite the brotherly relation, therefore, visitors of the Alpe Adria Küche are definitely in for a treat!

Three days later, on the 25th of September, visitors of the Alpe Adria Küche will be able to join Jure Tomič from ošterija Debeluh, who will be showcasing his skill in the “art” of making homemade pasta. Jure Tomič became a world champion in preparing pasta in Parma back in 2016 when he prepared an award-winning pasta dish with goat cheese and zucchini. Visitors of the Alpe Adria Küche who are joining this cooking lesson will also receive an apron. On the same night, Jure Tomič, will be preparing a dinner with 6 courses.

The final highlight will be the Alpe Adria Kuche is the so-called “Pleasure mile”, which will be held in the historic center of Klagenfurt: from 25th to 27th September. Regional delicacies are tasted between Renaissance arcades, courtyards, and beautiful squares. More than 45 exhibitors present their products between olive oils – Oil Pope Heinrich Zehetner will offer tastings – saffron, cheese, wild herbs, wines, organic meat, desserts, and coffee. Culinary hotspots such as Sappada, Goriska Brda, Riegersburg, Gorenja Vas, Central Carinthia are guests and show their diversity. A land of plenty of good taste awaits visitors.