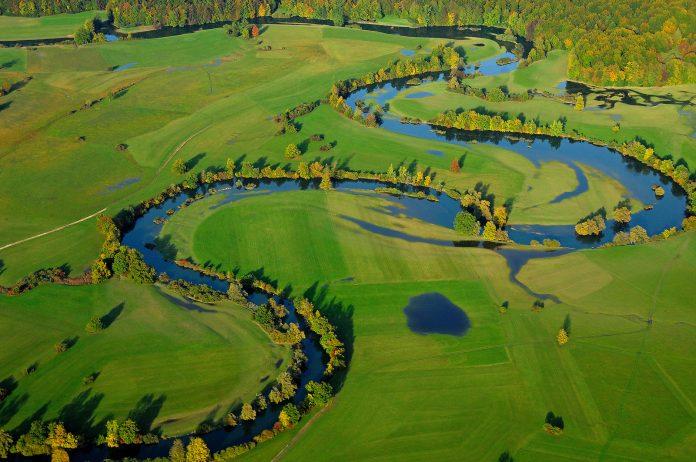 This could easily be the title of this article in which author of the book “The Slovenia Lakes” – Manca Korelc takes us on a journey through the top 5 intermittent lakes in Slovenia.

An intermittent lake that stuns with its variety

The lake Cerknica has first been mentioned in antiquity, while from the 15th century onward, it has appeared on the maps of Europe Lake Cerknica is said to be one of the largest intermittent lakes in Europe and is the largest lake in Slovenia when it is filled with water. When it is filled to the brim, its surface area measures a mighty 30 square kilometers. The water usually stays in the karstic filed for up to nine months of the year. Heavy seasonal rains are known to fill the lake up in a couple of days, while the waters seep away for many weeks.

Discover the lake with traditional means of transport

The most authentic way to discover the lake is by taking a panoramic ride in a traditional horse-driven carriage, the so-called lojtrnik, which were once used to transport grass and hay. The other is to float on the lake’s surface with a drevak, a traditional wooden boat, made from a hollowed-out tree trunk – these were once a key component of transporting merchandise and even animals across the lake.

Other activities around the Lake Cerknica

You can bathe in the lake, and its waters hide the highly-prized endemic pike, which attracts fishermen from far away. When the water freezes over in winter, the lake truly becomes a sight to behold and many people ice skate on it. The lake Cerknica is a perfect destination for those who like a bit of adrenaline in their lives: here, you can observe and photograph the brown bear in its natural environment. The vicinity of the lake is home to no less than half of all of Europe’s bird species.

You can get plenty more information on the lake in the museum aptly named ˝the Lake’s Cottage˝, situated in the village of Dolnje Jezero. For many years, this institution has presented to the lake’s visitors a cultural-informational hub. You can take a look at the ethnographic collection there, and observe how the lake changes with the seasons. The section of the museum dealing with folk traditions, will transport you back to the 1890s, and present to you the tradition of handmade tools.

Lake Petelinje or the accumulation lake Pungart is located on Kopje, a well-known ski resort in the region of Koroška, close to Slovenj Gradec. The lake is named after a wild rooster that lives in the area. This intermittent Slovenian lake is intended for providing artificial snow to the ski slope while in summer it turns into a beach that invites you to rest on its wooden deck chairs.

Petelinje Lake and Kope are full of life

Petelinje Lake with Kope is a great summer destination, offering a whole range of experiences for families and sports enthusiasts. Kids will enjoy Holzer’s fairy-tale land and the little ZOO holding 15 different species of animals. For lovers of sports, there is a beach volleyball court, a football field, and a bike park. There are also 13 energy points at the top of Pungart where you can relax your body and mind.

The Seasonal Lakes of Pivka

The timid and elusive lakes that need to be captured

The Seasonal Lakes of Pivka are a group of lakes on the karst soil of the Pivka Basin. There are as many as 17 in the 15-kilometer airline space,  making them a unique phenomenon in Europe. The seventeen lakes have multiple faces: there are large and small, the largest of them being Lake Palko, while Lake Petelinje retains itself for up to 6 months, and some, such as Laneno Lake only appear in times of heavy rainfall.

In the summertime when the water mysteriously descends underground, beautiful flowers take over the meadows. You can list over 180 types of plants here, be delighted by the over 100 different species of butterflies and let 127 different bird species sing for you as you take a walk. Bears, wolves, and lynx have also found their home in the area of the ​​lakes.

All the lakes have their own names

Interesting fact: The Eco-Museum of Seasonal Lakes will show you the origins of the lakes and reveal their playful nature – the lakes actually have the power to disappear overnight. So it should not be a surprise if you go out to see them and they end up hiding from you.

A lake that uses trees to scribble down on karst fields

Planinsko polje is a classic example of a karst field that in times of heavy rainfall transforms into a stunning lake. Flooding occurs here by the river Unica, one of the seven names for the karst sinkhole, the river Ljubljanica. The floods last from a couple of days up to a few months.

Polje is most attractive for hiking, jogging, biking, and horseback riding, but when it turns into a lake, it is a great experience for lovers of boating and stand up paddling (SUP)

Beside it, the greatest Slovene poet came to find his words

Radensko Polje is a lesser-known picturesque Karst field, in the vicinity of Grosuplje, which in spring and autumn turns into an intermittent lake. Three rivers, Zelenka, Šica and Dobravka flood the field during heavy rainfall and create several small or one large lake.

According to folk tradition, the miraculous spring of Mary originates on the secluded hill of Kopanj that rises above the lake. In the vicinity of Radensko polje, you can visit the remains of Boštanj Castle. When there is no lake, Radensko polje is covered with flowers. In colder winters, it rests under a striking armor of ice.

Get to know Slovenian Lakes in the new book!