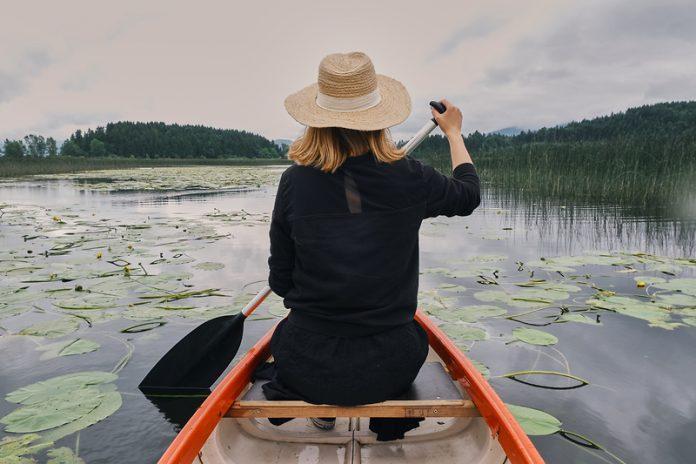 Lake Cerknica or Cerkniško Lake is – Europe’s largest intermittent lake. Taking a trip to Lake Cerknica is always a good idea, as long as the lake is there of course.

Now you see it, now you don’t! Well perhaps not that quickly but regardless of Europe’s largest periodic body of water, Lake Cerknica is, truly a magical natural phenomenon.

The lake is usually at its largest in spring, whilst when dry it becomes a green meadow where cattle graze amongst sinkholes. When the lake freezes over in the winter it becomes a venue for cross country skiing and ice skating.

An intermittent lake that stuns with its variety

Lake Cerknica has first been mentioned in antiquity, while from the 15th century onward, it has appeared on the maps of Europe Lake Cerknica is said to be one of the largest intermittent lakes in Europe and is the largest lake in Slovenia when it is filled with water. When it is filled to the brim, its surface area measures a mighty 30 square kilometers. The water usually stays in the karstic filed for up to nine months of the year. Heavy seasonal rains are known to fill the lake up in a couple of days, while the waters seep away for many weeks.

Discover the lake with traditional means of transport

The most authentic way to discover the lake is by taking a panoramic ride in a traditional horse-driven carriage, the so-called lojtrnik, which were once used to transport grass and hay. The other is to float on the lake’s surface with a drevak, a traditional wooden boat, made from a hollowed-out tree trunk – these were once a key component of transporting merchandise and even animals across the lake.

Other activities around the Lake Cerknica

You can bathe in the lake, and its waters hide the highly-prized endemic pike, which attracts fishermen from far away. When the water freezes over in winter, the lake truly becomes a sight to behold and many people ice skate on it. The lake Cerknica is a perfect destination for those who like a bit of adrenaline in their lives: here, you can observe and photograph the brown bear in its natural environment. The vicinity of the lake is home to no less than half of all of Europe’s bird species.

This will probably one of the most amazing SUP adventures in Slovenia. Grab your SUP board and visit the biggest intermittent lake in Europe. Cerknica Lake is an intermittent lake, so the level of water is changing and we have to catch the right time when stand up paddling is even possible.

While paddling on Cerkniško lake you will be able to explore pristine Slovenian nature and visit the stunning Škocjan Caves.

Discover the top locations for stand up paddling in Slovenia, here.

You can get plenty more information on the lake in the museum aptly named ˝the Lake’s Cottage˝, situated in the village of Dolnje Jezero. For many years, this institution has presented to the lake’s visitors a cultural-informational hub. You can take a look at the ethnographic collection there, and observe how the lake changes with the seasons. The section of the museum dealing with folk traditions, will transport you back to the 1890s, and present to you the tradition of handmade tools.

Carnival is one of the biggest in Slovenia and is well known for its great figures – Witches Uršula and Liza, Frog, Pike, Dragon, Jezerko, and others. The carnival is held in February.

The story of Bled Castle