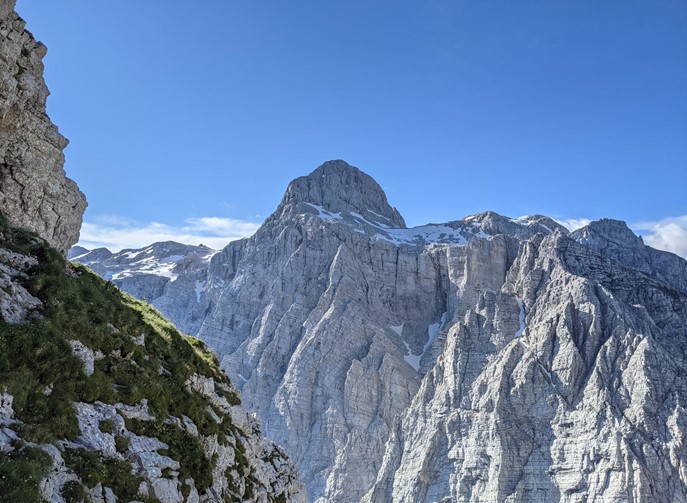 The highest mountain of the Julian Alps and the country of Slovenia, its national symbol. Although you supposedly are not a true Slovenian if you don’t reach the peak at least once in your life, it’s not an easy climb. Climbing its 2864 metres of elevation is not a walk in the park. It requires preparation and planning, and this is probably why you are reading this guide. Don’t worry, I got you covered.

WHEN TO CLIMB IT?

Of course, if you’re a true alpinist, then the Triglav season is open all year round. Of course, then you probably wouldn’t be reading this guide. If you want to reach the top without the need for winter hiking equipment, the window for that usually opens in June and closes in October.

Triglav Tours
They say to be a true Slovene means to hike Slovenia’s highest mountain. The three-headed (Slovene “tri-glav”) giant dominates not just many a mountain view of the Julian Alps but also the coat of arms on the Slovene flag. As a visitor, you can climb it without any pressure of proving your national affiliation, but […]

Of course, it depends on the amount of snow the winter brings each year – Some years, most of the snow melts till the end of May, but sometimes you will still have to cross some snow sections on the hike. If those sections are hard-packed and steep, it’s a no-go without proper winter hiking equipment. The same stands for early autumn, where early snow can make it impossible to hike the last few hundred metres of elevation.

You would think then, that it is a no-brainer to climb it in July or August. Sadly, it’s a tradeoff.

Yes, you can be sure that no snow will bother you in these two months, but if you are looking for peace and quiet on the top of the highest mountain of Slovenia, you probably won’t find it then. At the peak of the summer season, more than 2000 people reach the top every day.

But of course, don’t fear that you’re gonna have to look over other people’s heads to see the view. Nothing like that, you will just have some less peace and quiet than you usually get in the Slovenian mountains.

WHICH ROUTE SHOULD I CHOOSE?

There are quite a few routes that lead to the top of Triglav. Which one you choose depends on your desires for this trip.

Is your only goal reaching the peak of Triglav the fastest way possible?

Although most people do it in two days, some well-prepared locals do it in 6 hours total. Heck, the record for up and down is less than 2 hours and a half. But don’t mind those machines, if you have good stamina, you can climb Triglav in one day.

Trip to Triglav by Exploring Slovenia
The most scenic tour to Triglav It’s been 124 years since Jakob Aljaž, a great patriot and a priest, paid one Austro-Hungarian gulden for the top of Slovenia’s highest mountain. The amount of money one could have bought 50 eggs or 10 liters of milk for. His idea was to oppose the prevalent Germanization of […]

The fastest route takes from the valley of Krma, through some alpine pastures with a good chance of meeting some friendly cows. The higher you go, the fewer trees there are, the more the views of the Julian Alps open up. Of course, the terrain turns rocky before you arrive at one of the huts right below the peak. You have to put your helmet on then and climb on the Via Ferrata to the top.

Do you want to take it a little bit slower?

Then choose to do it how most people do it, on a 2-day Triglav hike.

You’ll start in one of the glacial valleys surrounding Triglav – probably the Krma valley, which is the least demanding way of getting to one of the huts below the peak. If you want to scramble more and walk less, then choose one of the paths from the Vrata valley. Either way, you will sleepover in one of the two huts a few hundred metres under the peak – the Kredarica hut or the Planika hut. The next morning you will climb the 400 metres of a via ferrata route to the top, take in the views, and then slowly return down to the valley.

Do you want to have a more relaxing and diverse experience of hiking through the Julian Alps?

Triglav is not the only attraction around there. It’s part of the larger Triglav National Park, which boasts an endless amount of natural attractions. If you want to see at least some of that, go on a 3-day Triglav hut to hut hiking tour. This way you can also experience the highland world of Fužina alpine pastures, some still producing milk and cheese in the traditional way. After reaching the top of Triglav, you don’t have to go back the same way, but through the magnificent Triglav Lakes or the Seven Lakes Valley.

The multiple-day tour is a perfect way to see more of what the Slovenian mountains have to offer, while also getting the highest peak of Triglav under your belt.

Do you want to try yourself on a more adrenaline-pumping route?

It’s true that either way you climb Triglav, you’ll have to climb the Via Ferrata at least the last few hundred metres of elevation. But that means that most of the hike will be technically easy with mostly walking. So, if you’re more of an adrenaline junkie or want to challenge yourself, choose a route that has more climbing and less walking – The Bamberger Triglav Via Ferrata route over Plemenice.

That path leads from the valley of Vrata, up close near the Triglav north face, the biggest mountain face in Slovenia, locally sometimes called just “The Wall”. Then it goes up the Via Ferrata, which some say is the most beautiful route to Triglav, to the Western Triglav plateau, after which the climb continues to the top.

Triglav National Park: Slovenia’s highest peak and only national park
Triglav National Park, the only one of its kind in Slovenia, covers only 4% of the landmass, yet what a spectacular proportion it is. The park’s breathtaking landscape, including jagged peaks, expansive spruce forest, lush valleys and harmonious ecosystem has all been protected since the Alpine Conservation Park was founded back in 1924.     […]

For example, Triglav being the highest mountain in Slovenia means that the temperatures you experience in the valley will probably be much different than those close to the peak, especially if some clouds hide the sun. That means you should take extra clothing for the lowest possible temperature you can expect that day and not the most likely one.

Additionally, all the routes that lead to the top have at least an hour of climbing along via ferrata steel cables. That means that you should take a helmet and a via ferrata safety kit. The first one is for the falling rocks, mostly from the climbers above you; The second one is to be safe in case of a bigger slip and it also helps people who have a slight fear of heights be more confident.

The same goes for the weather. Just looking at the sky without carefully considering the weather forecast for the day can be misleading. In the mountains, a clear sky can turn into a storm in less than an hour. A well-prepared hiker will already expect a chance of storm clouds forming and will plan the hike accordingly. That usually means going earlier (headlamp will come in handy) and reaching the peak before noon.

All of these things apply to most mountain hikes in Slovenia and abroad, things an experienced hiker already knows. If you don’t have that experience, you’re probably not even sure about the basics, so DON’T skip the next few paragraphs.

Triglav, 2.864 m, 360 VR view
The King of Slovenian Mountains in VR THE Slovenia Book: Top 100 Destinations (3rd Edition) The most scenic tour to Triglav It’s been 124 years since Jakob Aljaž, a great patriot and a priest, paid one Austro-Hungarian gulden for the top of Slovenia’s highest mountain. The amount of money one could have bought 50 eggs […]

TOO MANY CHOICES, WHAT SHOULD I CHOOSE?

Even though I tried my best to describe what a climb to Triglav looks like, there is still so much information and different things to be mindful of, that it’s hard to write them all without it being too long.

So if you don’t have that much hiking experience in the high mountains or just want the hike to be less stressful and more enjoyable, you should go on a guided triglav tour or a hut to hut hiking slovenia.

It is the safest way to go (fearing for your life is not an enjoyable experience). Local guides are certified professionals with lots of experience in the mountains. They will guide you through all the preparation and make your journey easier and safer, whatever the mountain throws at you. Plus, they are usually fluent in English and tell you all about the mountains surrounding you, the wildlife, the history of the place and some interesting stories.

I understand you may not want the additional company of a guide, but still don’t have all of the knowledge necessary. In that case, I recommend you go on a self-guided tour, where the guide helps you prepare and gives you all the needed information. But in the end – you’ll be the one who will use it on a hike.

Be safe, but no fear and keep on hiking!