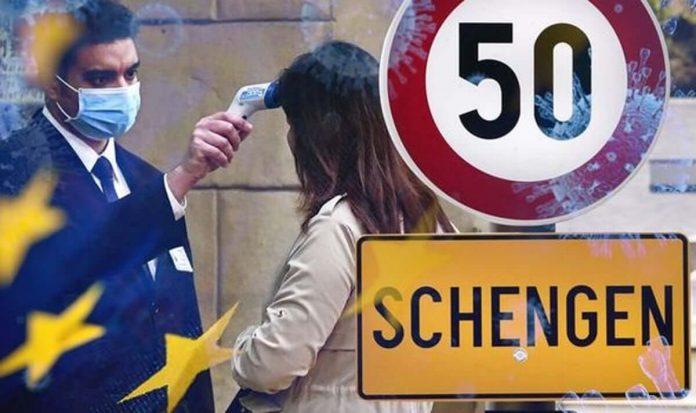 EU Member States have a 30-day restriction on non-essential travel to the European Union to stop the new Coronavirus (COVID-19) from spreading further. Countries will continue to take steps to limit public life.

Passport-free movement otherwise known as Schengen is arguably the most successful feature of daily life for more than 400 million people in the European Union. But now the Coronavirus poses an existential threat as many countries already started to close borders in Europe.

The ability to travel across the bloc without border checks or passports was enshrined in the 1990 Schengen agreement and became a reality in 1995. Ireland and the U.K., which has since quit the EU, arranged an opt-out back in 1999. Four other EU member states (Bulgaria, Romania, Croatia and Cyprus) are outside Schengen while Switzerland joined the borderless area in 2009.

Austria and Croatia announced they would temporarily close dozens of small crossings on the border with Slovenia to help stop the spread of coronavirus, after which the Slovenian government ordered the closure of 27 local border crossings with Croatia from Tuesday. Major crossings remain open. As of midnight Tuesday, crossings to and from Austria will only be allowed at the major crossings Karavanke, Šentilj, Gornja Radgona and Ljubelj, and the smaller border posts Kuzma, Jurij, Trate, Radelj, Gederovci, Korensko Sedlo, Holmec and Vič.

Slovenian officials introduced tighter controls on its border with Italy, effective Wednesday evening. Passenger bus and train travel between the countries was suspended until further notice, with further restrictions on those entering Slovenia through its western border. All but six border crossings will remain open.

Foreigners can enter Slovenia only if they present a negative coronavirus test less than three days old, or agree to a health check, and do not show heightened body temperature or other symptoms such as coughing or sneezing, the officials said.

Hungary said late on Wednesday it was reinstating controls on its border with neighbors Austria and Slovenia on top of barring travelers from Italy as well as China, Iran and South Korea. The measures were announced on Wednesday after Prime Minister Viktor Orban’s cabinet declared a nationwide state of emergency, the first such instance in Hungary since the fall of the Iron Curtain.

On Tuesday, Swiss foreign minister Ignazio Cassis said the correct approach in tackling the coronavirus was not to close borders but instead to promote European cooperation. Swiss authorities had been reluctant to close the borders due to the number of cross-border workers who live in Italy but work in the Swiss healthcare sector. Cassis addressed this, saying “the health reality is that we are interdependent on the European continent. Our neighbors know, for example, how much the Swiss healthcare system depends on border staff.”

Serbia closed its borders on Tuesday for travelers from countries most affected by the coronavirus outbreak to prevent the spreading of the disease, the government said in a statement. The temporary ban applies to people arriving “from Italy, certain provinces in China, South Korea, Iran, and Switzerland”, it said. The government did not say when the ban would be lifted. So far, four people in Serbia, including a Chinese national, have tested positive for the coronavirus.

How is shut down of borders working in Italy?

Many of Italy’s cities were described as quiet on Tuesday. Bars and restaurants in Rome were open but there were few tourists around. Prime Minister Giuseppe Conte has urged Italians to stay at home, and the effect on the nation’s cultural life has been immediate.

Gyms, cinemas, swimming pools, and schools have closed, and the Serie A football championship has ground to a halt, but public transport is still operating. In a decision that appeared to go against the grain of the Italian measures, Pope Francis urged Catholic priests to visit people infected by the virus. “May they accompany healthcare professionals, volunteers in the work they are doing,” he said during a Mass for visiting clergy at the Vatican.

The virus is most deadly for Italy’s elderly, according to figures from coronavirus emergency commissioner Angelo Borelli, who said the latest fatalities involved people already suffering from other illnesses. Seventy-seven were aged 70-89, while just 10% were aged 50-69. The remainder were over 90.

BREAKING NEWS: Number of coronavirus cases in Slovenia up by 39 to 841, death toll at 15

How to properly pronounce the name of the country that has LOVE in it? We hear many variations of...
Read more

Today we are cooking with Indian restaurant Namaste. We will be making Samosa! What you need:
Read more

End of voting for The Slovenia Restaurant Awards 2020!

Today the voting for The Slovenia Restaurant Awards has officially ended.  In February, the Gastronomy Academy, which brings together...
Read more

Free shipping for all products! Use code stayathome! Dismiss