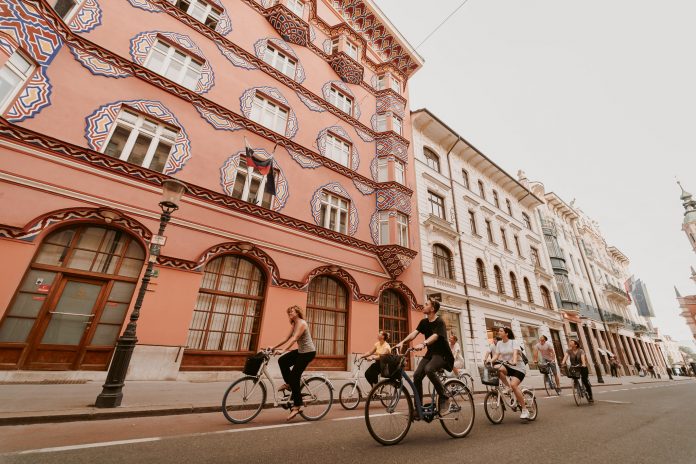 A city tour on wheels

When we’re all rolling up in our electrical, self-driven cars or catapulting ourselves across oceans by clicking our shoes like Alice in Wonderland in the possibly near future, we are certain there are still going to be those that love to ride the good old bicycle. Queen knew it, and so do we: riding in a bike-friendly city like Ljubljana with wind in your face and the self- congratulatory feeling of having moved your body is a joy. Joining Bike Tour Ljubljana you’ll experience no parking hassle, no noise, no fumes, just the sounds of a creak here or there, paddling away, and the occasional “ring-ring” of the bell. Walking tours simply can’t compete. They’re nice for a stroll around downtown, but on a bike, you get to see the big picture of this city and what’s best, you get to directly experience an important aspect of local life in Ljubljana.

Did you know that the oldest wheel in the world was found in the Ljubljana marshes? That it wasn’t part of a prehistoric bicycle but rather an axle cart is beside the point. The point is that you’ve already learned something about Ljubljana just by thinking about wheels, so it only makes sense that on wheels we shall proceed.

Because of its unique geographical position, the Ljubljana basin was always thought of as an important hub of travel and communication between the Mediterranean, Balkan and Pannonian regions. While remnants of Emona, the roman city that once stood here as well as the later middle-aged settlement dominate the castle hill and the town underneath it, the city’s development and character spreads to places beyond that small central area, which is best reached by bike.

No one wants their tour group to complain about sweats and aches, so the 2 or 4-hour bike tours in Ljublana lead through mainly flat terrain and cover the city’s main points of interest. Since this is a tour, pauses are made to catch your breath, take a photo, and listen to explanations, stories, and anecdotes by charming English speaking guides. You’ll see they love their job. What’s there not to love? In this kind of tourism, stress is a stranger. So adjust your seat, roll up your trouser leg and follow them into an enjoyable and memorable outdoor activity.

Those who had the opportunity to visit Slovenia in the past know that our gem on the sunny side of Alps looks like a...
Read more

Get the latest information about Coronavirus in Slovenia here. Slovenia has tested over 1,717,000 people in the last few months since the epidemic with...
Read more

The 15th stage of Giro d’Italia will run through Slovenia

After 17 years, the spectacular Italian bicycle race Giro d’Italia will again run through Slovenia, more precisely through the region of Goriška Brda and...
Read more