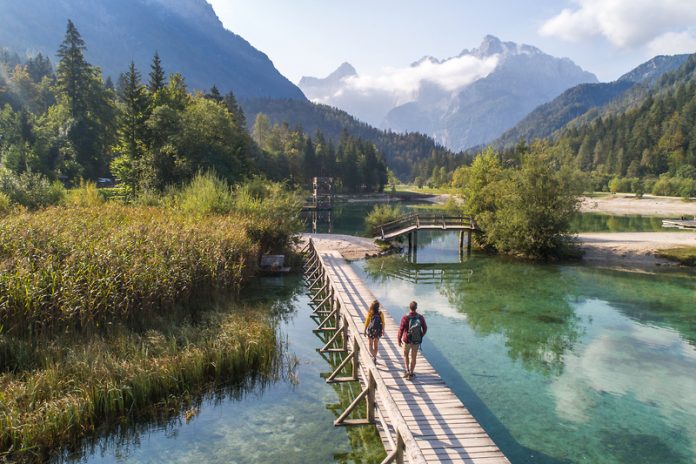 Among the amazing world destinations that Conde Nast Traveller picked as the best holiday destinations for 2021, our lovely home country was placed on number one spot. Besides Slovenia, Conde Nast Traveller placed countries such as Guyana, Costa Rica, Vietnam, Dominican Republic, Australia, The Canary Islands and other stunning places on their list.

Not long ago, Conde Nast also placed Slovenia on their list of best places in Europe to visit in 2021. Read more here.

Slovenia as the best holiday destination for 2021

Slovenia is known as the Michelin-starred food and old-world wine make this an exciting up-and-comer.

It’s somewhat mind-boggling that Slovenia – tucked between old favourites Italy and Croatia – hasn’t been overrun already. After all, its turquoise rivers, glacier-fed lakes and soaring, snow-capped peaks are pretty enough to make even seen-it-all sorts weak at the knees. The country’s most famous landmark, Lake Bled, is more peaceful than any of Europe’s better-known lakes. But for now, at least, it remains blissfully unbusy; a place of wide-open spaces, splendid solace and restoratively pristine air.

But it’s the sustainable food practices and carefully considered old-world techniques that mean Slovenia is making itself known as a big-hitting foodie hotspot. And the hubbub is well-deserved – 2020 saw the launch of its first Michelin Guide, in which six restaurants – including Hiša Franko, helmed by Ana Roš of Chef’s Table fame – were awarded a total of seven stars. You’ll find future-focused Alpine dishes on Roš’s imaginative menu – from goat’s-milk croissants stuffed with rosehip to roebuck sashimi with juniper and chestnut – while one-starred Dam in Nova Gorica serves exquisite local seafood.

This all comes ahead of Slovenia’s real moment in the spotlight, having been named the European Region of Gastronomy for 2021. The emphasis here falls firmly on ecological farming and sustainability – the capital Ljubljana is one of the greenest cities on earth – with locally sourced ingredients harvested from Adriatic salt pans, grown in gardens, foraged from meadows and turned out by the country’s ever-productive bees. Oenophiles are getting a whiff of its potential, too, with a staggering 52 grape varietals producing award-winning amber and natural wines. Zorjan’s Dolium Muscat Ottonel was recently named the world’s best orange wine by Decanter, and whole parts of the country – including the Lendava route in the east – are dedicated to the drink. In fact, the globe’s oldest vine grows in the Slovenian city of Maribor, and you’ll even find a sleek restaurant and wine bar, Strelec, on the top floor of the historic 12th-century Ljubljana Castle.

When it comes to bedding down, the folks behind Michelin Plate-awarded Pikol restaurant, a favourite of in-the-know foodies in Nova Gorica, have transformed the site into a floating glamping village. Here, you can hole up in cabins on the lily-flecked lake, emerging only to trek around the surrounding forests and tuck into sea-bass carpaccio.

Gourmet Bible & the 7 Chosen Ones from the Croatia