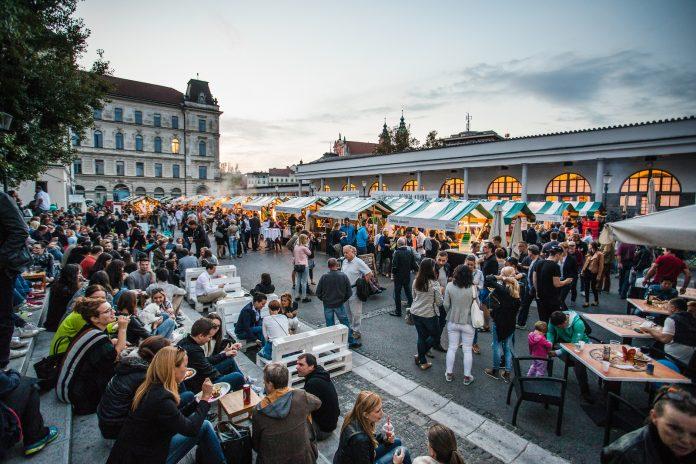 Dear Foodies and culinary enthusiasts, we have gathered the Top culinary and gastronomic events of 2020! From The Slovenia Restaurant Awards to festivals of chocolate, beer, sausages, BBQ, chili, wine and much more!

Check out the Top Culinary and Gastronomic Events of 2020 below and taste Slovenia!

3rd of February: The 5th ‘Krodegin’ Sausage Day in Dutovlje

13th of February: Gourmet Night: Jakončič vs. Kupljen in the Grand Hotel Bernardin

13th of February: Carnival Tuesday in Ptuj and other Slovenian bigger cities

7th of March: Pruning of the Old Vine, the oldest vine in the world in Maribor

13th of March: Festival of Coffee in Celje

13th of March till 20th of December: Osmica in the Karst in Komen

13th of March: 5th Kulinart: Festival of Food and Drinks in Celje

16th till 17 of March: Chefs stage in Šibenik

18th of March: Announcement of Slovenian recipients of Michelin star in Ljubljana

20th of March till 30th of October: Opening of “Odprta Kuhna” in Ljubljana

20th till 21st  of March: International Festival Chilli and Chocolate in Maribor

28th till 29th of March: GRILL & BBQ FEST in Ljubljana

28th till 30th of March: European Food Summit in Ljubljana

4th till 5th of April: Grill & BBQ Fest in Ljubljana

18th of April: Brda&Wine in Brda

18th till 19th of April: Rebula and Olive Oil Festival in Goriška Brda

26th of April: Festival of wine and chocolate at Podčetrtek

5th of May: The Slovenia Restaurant Awards at Smlednik

5th of May: The Slovenia Dinner at Smlednik

14th of May: Street Food Market in Maribor

15th till 17th of May: Specialties of Slovenian farms in Ptuj

22nd of May: Refosco and Slovenian Istria Festival at Marezige

23th till 24th of May: Artichoke Fest in Strunjan

29th till 30th of May: Olives, Wine and Fish Festival in Izola

30th of May till 7th of June: Cherry Festival at Goriška Brda

31st of May: Picnic in City Park in Maribor City Park

31st of May: Cherry to Cherry Hike at Goriška Brda

1st of June till 31st of August: Fishermen’s Evenings in Izola

14th of June till 15th of September: Summer of open wine cellars and homesteads in the Karst

20th till 29th of June: Sladolent in Maribor

11th till 12th of July: Wine and Garlic Feast in Nova vas

25th of July: Setting up of the Wind Rattle in Front of the Old Vine House in Maribor

8th till 16th of August: 50th Teran and Prosciutto festival in Dutovlje

26th till 29th of August: Greatest Poets and Best Wines in Ptuj

17th till 20th of September: The Old Vine Festival in Maribor

20th of September: The ceremonious grape harvest of the oldest vine in the world in Maribor

26th of September: Čiliada in Izola

26th till 29th of September: Festival of Coffee and Cafe Culture in Ptuj

3rd of October: Beer and Sausage Festival in Kranj

10th till 11th of October: Kozjansko Apple Festival at Podsreda

30th of October till 30th of November: Taste Radol’ca, the month of local cuisine in Radovljica

2nd till 30th of November: November Gourmet Ljubljana in Ljubljana

14th till 15th of November: St. Martins Festival in Šmartno

To find out other unique places in Slovenia and features the very best in Slovenian dining, chefs and restaurants all over Slovenia, check out our newest edition of THE SLOVENIA RESTAURANTS BOOK!

If you know any other Culinary or Gastronomic events in Slovenia let us know in the comments below!

Made in Slovenia: Eclipse lamp

Light and shadow are framed in this wooden lamp. During the day it’s a perfect wooden circle on the wall – a symbol, icon, statement...
Read more

Get the latest information about Coronavirus and lockdown in Slovenia here. Slovenia has conducted over 2,708,000 COVID-19 tests since the global pandemic started last...
Read more