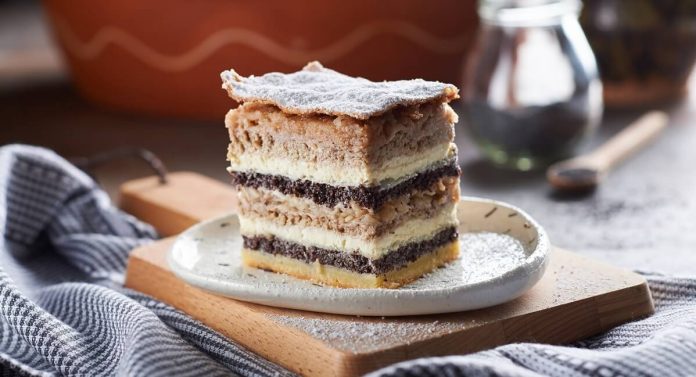 How to prepare one of the most famous traditional Slovenian dishes – Prekmurska gibanica or Prekmurje layer cake?

Slovenia is celebrating its title of European Gastronomic region of 2021. With that in mind, we decided to highlight all the traditional dishes and specialties our country on the sunny side of the Alps has to offer. Many Slovenian traditional dishes are known internationally, like Kranjska klobasa, which has traveled to space, Blejska kremšnita that tastefully represents the beautiful Alpine valley of Lake Bled and the “ever-green” festive pastry potica. Among the mentioned delicious trio, we must not forget to add Prekmurska gibanica or Prekmurje layered cake.

“I would mourn losing it even in heaven if I had to leave it behind in this world,” a Slovenian author wrote about the Prekmurje gibanica.

Prekmurje layered cake or in Slovenian Prekmurska gibanica is a symbol of Prekmurje region. The oldest mention of Prekmurska gibanica date back to 1828, when a local priest by the name of Jožef Kosič from Prekmurje compiled a text, which mentions the Gibanica as a special Prekmurian dish, which is a must at wedding festivities and is also served to workers after finishing a big project in the village or town. The priest also mentioned the many layers of Prekmurska gibanica: “The dough is rolled until thin, sprinkled with grated cabbage, turnips, or quark. All is covered by a second layer of dough. It is sprinkled as previously. 10 or 11 such layers are thus composed and form a conspicuous cake.“

After joining the European Union the Prekmurian layer cake was protected on a European level with the label ‘Traditional Speciality Guaranteed’. Similar to Kranjska klobasa, which is also under protection by the European Union, and only 13 sausage producers in Slovenia are allowed to make it.

Source of the recipe: STO

Tuna Fishing in the Adriatic Sea