One hundred of the richest Slovenians are one hundred million euros “lighter” last year; the first decline in the value of their assets in nine years is not due to poorer performance but to a more modest valuation of comparable listed companies.

In last year’s centenary of the richest, there are one newcomer and ten “returnees”; among the latter, he is also a self-employed entrepreneur. Among the regions, Osrednjeslovenska is still at the forefront with the largest number of millionaires, where Finance listed 35 of them together with three newcomers.

The winner among the regions was Podravje, which did not have a representative on the list of the richest last year, and since last year the region has been richer by as many as five millionaires. 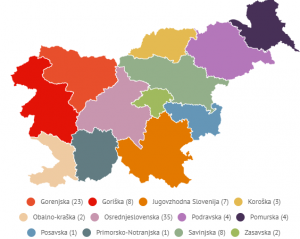 The second place on the list is a familiar name – Sandi Češko, who is the owner of 55 % of Studio Moderna, alongside his partner Livija Dolanc. This multinational company has business ties in 21 countries and boasts more than 7 thousand retail stores. Its main business activities are television and internet sales, combined with sales in brick and mortar stores. Češko’s wealth is estimated to be in the vicinity of 345 million euros. In third place is Marko Pistotnik, the owner of an 18,45% stake in the before mentioned Outfit7 – his wealth is estimated to be around 210 million euros.

The Lah family has increased their assests by 11 % in the last year. With 164 million euros as financial investors, they have taken fourth place on the list. On the number five spot we have one of the youngest Slovenian millionaires, Damian Merlak who is worth around 148 million euros. Damian Merlak made his impressive fortune in cryptocurrencies and by investing in real-estates.

Tatjana and Albin Dobersek from Engineering Dobersek placed seventh on the list of the wealthiest Slovenes of 2020. Last year their assets were estimated at 183 million euros last year, while this year it has decreased by 33 %, meaning they have now an estimated 123 million euros. In eight place with 123million euros, is a Franc Frelih, who manages Gea Oil Factory and Mirna Dana. He increased his fortune from last year by 10 %.

Jure Knez, the owner of Trbovlje’s Dewesoft, managed the highest jump. The value of its assets doubled to EUR 73.8 million due to the disclosure of excellent operations of other companies in the group. With growth, high profitability and ambitious plans, a new concrete leap may follow in a year’s time.

Among them are sports aces Goran Dragić and Anže Kopitar, after we deciphered the tax specifics and costs in the world of American professional leagues. The assets of Goran Dragić are estimated at EUR 51.4 million, and that of Anže Kopitar at EUR 31.5 million. If Kopitar had played his entire career, for example, in Florida as Dragić or in Texas as Luka Dončić, our estimate would have been 10 million euros higher.

Among the richest millennials in Slovenia, Marko Grgurović achieved great business success with 15 million euros, which he achieved with a computer game in less than two years.

In addition to athletes, the newcomers include former Elan sanitizer Uroš Korže, the majority owner of agricultural machinery manufacturer SIP Šempeter, the Moškotevc family, which is engaged in construction and import of beverages (VOC Ekologija and Ahac), an experienced entrepreneur and investor Boštjan Marovt (Metro) and door manufacturer Roman Pirnar.

The total value of the hundred richest Slovenians this year is 5.8 billion euros, which is 147 million more than last year, even though the threshold for entering the scale was lowered by six percent, to 20.9 million euros.

Why such growth you might ask? First, because of the newcomers who have been added to the rankings this year based on new findings, even though they have been wealthy in the past. Second, companies owned by the wealthiest have proven to be resilient to the Coronavirus crisis in Slovenia. And thirdly, the prices of European shares, which they also use in valuation, are on average quite similar to those they were last autumn. In addition, record payouts of profits were seen in many in the year before the tax rate on capital gains was raised.

Where to get tested for Coronavirus in Slovenia?