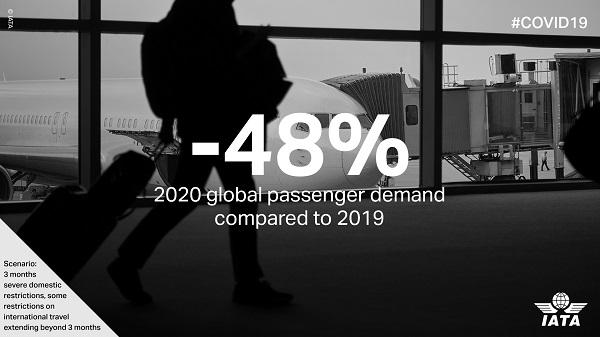 On April 14, the International Airlines Association (IATA) released an updated analysis showing that the COVID-19 crisis will reduce passenger revenues by $ 314 billion in 2020, down 55% year-over-year 2019.

As early as March 24, a scenario with severe travel restrictions of three months estimated an estimated $ 252 billion in lost passenger revenue (44% less than in 2019). Full-year passenger demand (domestic and international) is projected to decline by 48% compared to 2019 (as much as 55% in Europe) due to overall economic development and travel restrictions.

IARA announces that connecting cities by air will be critical for the recovery of 35% of international trade, supply chains, investment, and tourism. The consequences are severe for the winder economy reports IATA. Not just in terms of airlines, but also more than 25 million jobs are at risk throughout the economies of air transport.

Worldwide flights now down almost 80% by early April. Industry virtually grounded outside US and Asia domestic markets. A recession now expected to be much deeper in 2020. IATA also believes that post-lock-down return to air travel likely to be in stages. They assume domestic markets open in Q3 but international slower to open.

Today’s chart looks at the rate airlines are expected to burn through their existing cash reserves. You will recall that in our latest impact assessment we estimate that passenger revenues will be $252 billion lower this year compared to 2019. Of this, the most severe impact will be felt in the current quarter (Q2), mainly because of the widespread lock-down of air travel; revenues will be a massive 68% lower in 2Q20 compared to the prior year.

Against this backdrop, airlines have taken swift and drastic action to preserve as much cash as they can. More than 50% of the global passenger fleet has now been grounded which has helped airlines to reduce their variable costs (ie those directly related to operations). Depending on hedging practices, the significantly lower oil price has also contributed. However, these variable costs constitute only 51% of the average airline’s total costs.

The remainder are either fixed or semi-fixed costs, including crew costs. While there is scope to reduce some of these costs, a proportion is unavoidable in the short-term. In addition, airlines have significant liabilities accumulated from sold but not flown tickets. According to our estimates, airlines have $35 billion of tickets due for refund in the second quarter. This would significantly impact the average airline’s liquidity position if an immediate refund is required.