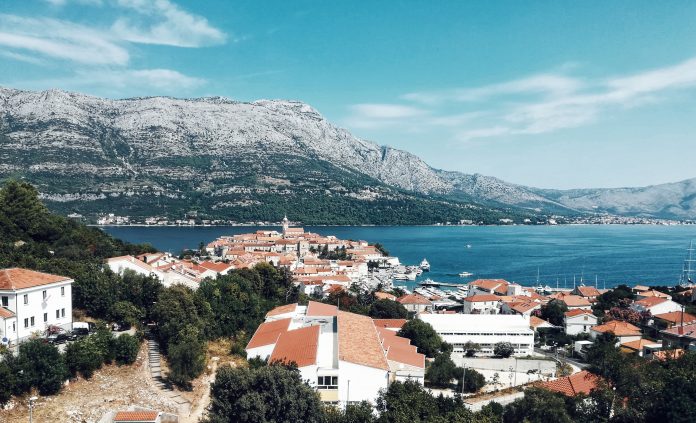 There is no secret that Dalmatia hides some beautiful pearls. It has breathtaking views, islands enriched in culture, history, and ancient spirits which wander through little stone-paved streets, and an amazing horizon that connects the sea, sky, and sunset. Each island has its own story which makes it special, but today, let’s talk about Korčula.

An old legend says that the island of Korčula was actually nymph Korkyra. Since Poseidon was a quite jealous God, he turned the nymph into an island paradise. From then until now, a lot of civilizations that inhabited the island left their traces so Korčula intertwines Illyrian, Greek, Roman, Croatian, Venetian, and Austro-Hungarian roots, as well as the beauty of a goddess.

The island of Korčula is also known as Korkyra. That is the oldest name of the island which was named by its inhabitants Dorani who came from the greek city Knidos. In the 1. century, the island was called Korkyra Melaina (black) because Greece has one more island called Korkyra and it was on the south of the sea, so they needed a way to distinguish them. As time went by, Korčula had a couple of more names such as Kurkra, Krkar, Corcyra Nigra, and Curzola.

Of course, different cultures throughout history influenced the lives of the island’s inhabitants, as well as their economy, traditions, and habits. All the influences from Greece, Italy, and other cultures and civilizations that left their traces, present the foundations of the island’s development.

There are a lot of records about Korčula’s “guardian of civilization” or to put it simply – about the island’s love for growing vines. Since Middle Ages, Korčula’s main branch of the economy is the viticulture. The quality of their wines is known from ancient times – throughout history, the wines have been exported to Venice and the Vienna Palace. The main reason for such quality wines is the island’s position – the climate has all five zones needed to produce top-quality wines (sum of sunshine hours and temperatures) which is quite rare in the world.

Besides wines, Korčula also has amazing traditional cuisine. As you probably know, when it comes to the life on the island, the cuisine is quite modest and simple, but still delicious. The basis of such a diet and cuisine are vegetables, fruit, fish, and other ingredients which, in the past, were the main ingredients adapted to material possibilities and accessibilities. Traditionally, more expensive dishes were only prepared for holidays and special occasions. Throughout history, a lot of cultures and countries influenced, what today is known as Korčula’s traditional cuisine and diet. Dishes are quite simple, yet rich in flavors, aromas, and interesting nuances. The inhabitants took that simpleness and turned it into a unique island’s gastronomic scene.

Korčula has a millennial tradition of making amazing wines. While the rest of Dalmatia is known for its red wines, Korčula has some pretty delicious white wines from indigenous grape varieties. In the central part of the island are small towns Smokvica and Čara, and they are known for Pošip and Rukatac. If we go a bit to the east, there is Lumbarda which is famous for its white wine called Grk. Besides white wines, the most widespread red wine is Plavac mali.

What makes all these wines stand out is their distinct personality, unique varietal aromas and nuances, and complexity of flavors. They also have extremely fine acids unusual for wines from such warm climates. Due to those characteristics, the wines are delicious and fresh.

Pošip is an autochthonous grape variety of the island of Korčula. This wine is the first Croatian wine with a protected geographical origin. Pošip is mostly grown in the center of the island around Smokvica and Čara. The wine is quite tasteful, it has a recognizable straw, golden yellow color, and full and distinctive taste. It goes great with fish dishes and white meat.

Rukatac is actually a Dalmatian autochthonous grape variety called Maraština. It is grown on Korčula for thousands of years now. In the past, dessert wines were made of rukatac but today, that tradition is a bit lost, so it is mostly used to make dry wines. Rukatac has a light-yellow color and nice full taste, and it is perfect in the combination with seafood.

Grk is a rare autochthonous grape variety, and it is grown on the sandy field of Lumbarda. Thanks to that, the wine has a quite specific flavor with fruit aromas and gentle herbal nuances combined with a slightly bitter finish. Grk is a truly unique wine of the island of Korčula and it is a must-try while visiting. Make sure to try it in the combination with fish dishes or white meat.

Plavac mali is one of the most famous red wines. This autochthonous grape variety is grown in south Dalmatia, especially on the peninsula Pelješac and the island of Korčula where it is also called pagadebit. Unlike Pelješac’s wine, Korčula’s plavac is a bit lighter which can be detected by the wine’s color and aromas. Plavac mali has amazing nuances combined with warm and full flavor with a touch of soft sophistication. It goes well with dishes prepared from the game or blue fish.

As we already mentioned, life on the island is characterized as modest and simple, and due to that, Korčula’s cuisine and Mediterranean diet are a bit simpler but each dish is amazingly rich in flavors, aromas, nuances, and textures.

The most basic ingredient for the preparation of different meals is olive oil. Korčula has about thousands of agricultural farms that grow olives. The island’s olive oil has a protected designation of origin, as well as a protected geographical indication of the European Union.

Of course, the Adriatic Sea brought many cultural and civilization influences on the Korčula’s traditional cuisine, but the sea also presents a way of living and feeding. Due to that, Korčula has a rich menu of fish dishes from the simplest ones like salted sardines and gere to gradele, brodet, and octopus, to a bit more luxurious recipes for grilled lobsters and shrimps. Besides the fish, inhabitants of Korčula gladly prepare lamb and goat.

Dishes that mostly stand out, thanks to their traditional history, are popara, lešada, and Žrnavski makaruni. Popara is a type of soup made of different fish, potatoes, wine, olive oil, garlic, and seasonings. Lešada is a name for preparing fish on lešo (cooked fish or fish soup), while Žrnavski makaruni is a traditional Korčula’s pasta. Makaruni resembles small flutes. They are similar to Istrian fuži but Žrnavski makaruni have a more oblong body. Korčula also has a unique recipe for pašticada with gnnochi (recipe for pašticada varies from one island to the other, from one region to the other, and probably from one household to the other). Of course, there are a lot more recipes and dishes that will simply seduce you!

When it comes to sweets, prikle or fritule are the most popular on the island. They are fried in oil and enriched with raisins and almonds. The island’s signature sweets are cukarini, klašuni, krokant, hroštule (known as kroštule, fanjki, and “poderane gaće”), kotonjata, and lumblija. All these sweets and desserts are quite simple to make but they are rich with tradition, sweet nuances, and amazing flavors.

Korčula is truly an island of beauty, breathtaking nature, clear sea, and delicious gastronomy in combination with amazing nuances of autochthonous wines. Even though it is a popular destination, Korčula still provides peace and relaxation. Whether you want to enjoy its beautiful history or culture, whether you want to explore all its coves or just enjoy the traditional dishes and tasting wines – Korčula is an amazing place to be, relax, explore, and taste!

For more must-try recipes, be sure to check out the post 76 amazing Croatian traditional dishes!

Get the latest information about Coronavirus and lockdown in Slovenia here. Slovenia has conducted over 2,682,000 COVID-19 tests since the global pandemic started last...
Read more

There is no secret that Dalmatia hides some beautiful pearls. It has breathtaking views, islands enriched in culture, history, and ancient spirits which wander...
Read more