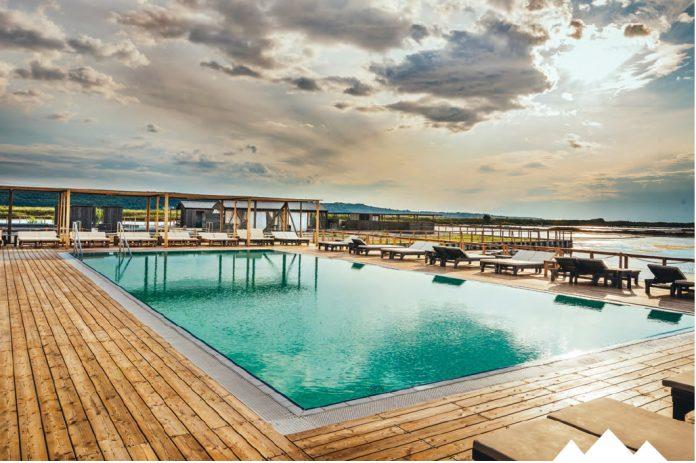 One of the last traditional saltworks on the Mediterranean

One upon a time, salt was one of the most sought-after commodities in the world. The phrase ’not worth his salt’ had to have come from somewhere, and it turns out that origin dates back to when a Roman soldier had his salary cut (even the word ‘salary’ is derived from ‘sal’, Latin for salt). In the Roman times of course, part of the soldier’s wage was paid in salt because of its high value. It may not play such a vital role economically these days, but it still happens to be something we can’t live without.

It is of great interest then that less than 10km from Piran, Sečovlje Salina Nature Park plays host to one of the only still functioning traditional salt flats in the Mediterranean, as well as a truly unique mix of flora and fauna that have come to thrive in the salty lands. The glory years for Sečovlje were between the 15th and 18th centuries, when the Venetians controlled the area. With the change of ownership moving to Austria, the salt-lands began to experience a cycle of prosperity and recession and were frequently on the verge of bankruptcy. Italy took over again after World War I, but the business side of things continued to decline until the decision was taken to make it into a national park.

SEČOVLJE SALINA NATURE PARK
The park, established as such in 1989 by the municipality of Piran, is split into two parts, called Lera and Fontanigge. The Drnica River separates them, and you should be aware that they both have separate entrances. Markedly different in their functions now, both Lera and Fontanigge are fascinating and well worth a look. Lera, on the northern side, still harvests salt to this very day, using the most traditional methods, methods that have only gone under the slightest change in seven centuries. Work goes on at the pans all year round, but June through to September are far away the most interesting times, which is when crystallised salt gets collected from the salt pans.

There is also a salt shop on Lera, housed in a restored salt flat building. Fontanigge, in the south, is an entirely different beast. Salt production here was abandoned in the 1960s, but it is here you can find the museum of salt making, housed in a number of renovated salt workers houses. Tools, salt stores and the history of salt making are all explored. The most fascinating aspect of Fontanigge might not be the salt however.

The abandonment of salt production created some unusual ecological conditions, allowing a number of rare species to thrive here. Not only does halophyte (plant life adapted to live in salty conditions) fauna dominate it, but a number of strange beasts also reside here. One of these is the Etruscan shrew, otherwise known as the smallest mammal on the planet. It has also provided a refuge for numerous birds, making for some of the most special bird watching available on the continent. At the time of writing there was no public transport out to Sečovlje, so driving, taking a taxi or a long but pleasant walk or bike ride along the sea from Portorož are your only options.QSeča 115, +386 (0)5 672 13 30, vodeni.ogledi@ soline.si, www.kpss.si.

LEPA VIDA THALASSO SPA
Located within the picturesque salt pans of the Sečovlje Salina Nature Park, the Lepa Vida
Thalasso Spa is definitely among Slovenia‘s most unique spa and wellness destinations. Constructed mainly of wood, the modern facilities blend seamlessly into the surroundings of the park, and offer incredible views of the landscape. Thalassotherapy is of course the medical use of seawater as a form of therapy (‚thalassa‘ being Greek for ‚sea‘), and was first developed on the Brittany coast of France during the 19th century, and Lepa Vida offers various health and therapeutic treatments, including salt-pan mud baths, bathing in brine (the liquid that remains
at the bottom of the evaporation ponds after hand harvesting), sea salt scrubs, full body massages, and much more. The spa can be accessed by either land or sea (for those with their own boats), and advanced booking is recommended. Q+386 (0)5 672 13 60, lepavida@soline.si,
www.thalasso-lepavida.si.

FONDA FISH FARM
A short and very pleasant boat ride takes visitors across to the farm, which is the only one of its kind in the protected environment of the Sečovlje Salt Pans Park. The Fonda family have deep roots in the coastal area and are passionate about not only producing the highest quality seafood possible, but also protecting the underwater environment thus encouraging other marine life to thrive. The sea bass are hand fed and allowed to mature for up to five years resulting in a superior quality fish that is in high demand. Visits to the farm are available throughout the year. In the event of poor weather conditions the tour stays on dry land but
visitors will still get the full educational experience, plus, most importantly, get to sample
the delicious produce. Pickup can be arranged from either Portorož or the main pier in Piran.
Q+386 (0)5 677 90 44, info@fonda.si, www.fonda.si.

SALT FESTIVAL
In a town so ‘salty’, it’s probably no surprise to discover that there is a festival dedicated to
it. Slovenes love festivals and Piran locals proudly eat, drink and make merriment in honour
of the local salt and salt production, that has been in operation for seven centuries. Tartini
Square, in the centre of Piran, hosts part of the event and other local produce such as wine
and olive oil are also celebrated. Demonstrations of salt production takes place and another
part of the festival is held in the working part of the national park. The event takes place each
April and is enjoyable and interesting cultural event to attend.

IQbator has been designing venture stories with an edge for 20 years with the mission to create a better future in Slovenia and will...
Read more

Made in Slovenia: Black Series & other wooden utensils

Collection of compelling kitchen utensils from wood Jernej Mali isn’t a product designer but a sculptor. He’s been working with wood for a long time,...
Read more

Get the latest information about Coronavirus in Slovenia here. Slovenia has tested over 1,566,000 people in the last few months since the epidemic with...
Read more