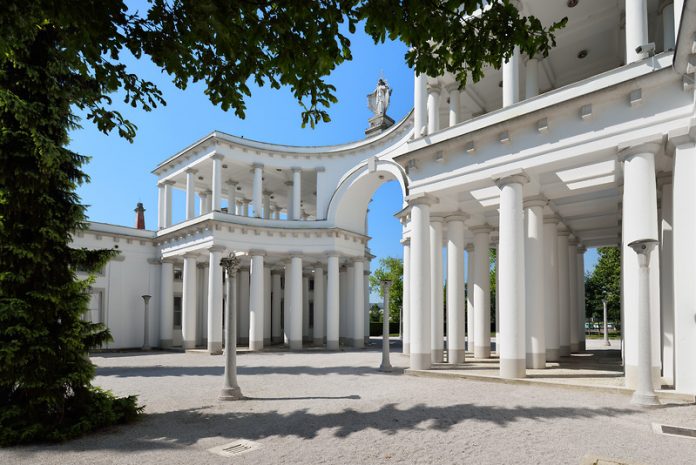 You don’t need to be an architectural aficionado to see that Ljubljana is a city full of elegance and grace, of beautiful buildings, bridges, and more than swoop and swoon like starlings. Many great architects put their tolar’s worth into the development of the city, but no vision is as tied to Ljubljana as that of Jože Plečnik. Known worldwide for his work in Prague and Vienna, the iconic architect is often referred to as the ‘Man Who Built Ljubljana’, and we aren’t about to disagree. Plečnik is everywhere in Ljubljana, but these are the classic constructions to make a beeline for.

No Plečnik piece in Ljubljana gets as much attention as the magical Triple Bridge (Tromostvoje), a claim that is literally true. Every single day, thousands of locals and visitors alike stroll back and forth across the bridge, the connecting vein that unites the city across the Ljubljanica river. There has been a bridge here for centuries, but it was Plečnik who extended it to a trio in order to avoid a build-up of traffic at this most important spot.

While Plečnik has a large catalogue of tremendous creations, it is arguably his repurposing work that shimmers the most. Case in point is the Križanke Outdoor Theatre, an old monastery that was handed to Plečnik in 1952 with instructions to create a venue for the summer festival. Križanke was the great man’s final gift to the city, and what a way to sign off.

All imposing columns and Renaissance flow, Ljubljana’s Central Market is one of Jože Plečnik’s most sophisticated achievements. As far as settings for humble tradesmen go, this might just be one of the most stylish, although the bakers and butchers of yesterday have long been replaced by cafes and bars.

Plečnik’s most impressive contribution to the city? It is difficult to argue against the astounding National and University Library, known as NUK in these parts. The imposing nature of the exterior commands respect, while the intricacies of its details hint at a deeper knowledge waiting to be embraced. Ljubljana is a creatively intuitive city, and Plečnik’s library is a great example of that.

A breezy 2km walk outside the centre of the city, Žale Cemetery is an appropriately grandiose homage to the afterlife. Plečnik followed a similar thought process here as with the central market, imbuing the every day with a finesse that brings grace to the quotidian. The entire cemetery complex is a joyful sprint through life, making it one of Plečnik’s most ambitious projects in the city.

Plečnik designed many bridges that span the Ljubljanica, and the beloved Cobblers’ Bridge (Čevljarski Most) is second only to Tromostvoje when it comes to adoration and plaudits. Its name comes from a time before Plečnik, when the stench of raw meat saw the local authorities move the butchers that made their trade here, replacing them with shoemakers. The bridge took on its Plečnik-inspired form in 1931.

You might not immediately think of a sluice gate when searching for beautiful architectural constructions, but Jože Plečnik wasn’t your ordinary architect. The gate that spans the Ljubljanica in Poljane perfectly straddles the line between monumental and magnificent, a grand farewell to the eponymous river as it leaves the heart of the city.

Where better than the man’s own home? Jože Plečnik moved into this house in Trnovo and bought the house next door too, in order to develop the perfect home for a man of his vision and curiosity. The house is now a museum, a must-visit for anyone looking to discover the life and work of Slovenia’s greatest architect.

A short 8km journey south of the capital, the small village of Črna Vas is home to one of the most celebrated pieces of Plečnik architecture in the region. The Church of St Michael is an architectural miracle, a church built into the surrounding marshes using ingenuity and creativity, two of Plečnik’s most important attributes. Plečnik used local materials and the intricate knowledge of craftsmen in the town in order to build the church, which has grown into one of his most beloved works.

Vzajemna Insurance Building The Vzajemna Insurance Building doesn’t get anywhere near the attention of other Plečnik pieces in the city, despite the fact that almost all visitors to the city will spend a decent amount of time looking up at this striking building, located across the road from the bus and train stations. The structure follows a similar vein to the NUK but in more concentrated form, all columns and imposing details that showcase Plečnik’s confidence and credibility. Next time you’re at the station, pay this beauty some special attention.