Aquaint central European town that proudly celebrates its long turbulent history and rich cultural heritage, with 50,000 inhabitants Celje is the third largest city in Slovenia and an increasingly popular destination for both domestic and international tourists. Over the past two millennia the city has seen its fair share of ups and downs. After becoming a boom town during Roman times, it was virtually absent from the historical record until the 12th century, and then a regional powerhouse under the rule of the ill-fated Counts of Celje, only to take an historical backseat again until its re-emergence during the 20th century.

Nowadays the city manages to perfectly blend its laid-back provincial spirit and wealth of cultural sights and activities, with modern develop- ment and an ample selection of hotels, restaurants and shopping centres, as well as a flourishing arts scene and active nightlife.The surrounding municipalities of Laško, Dobrna, Vojnik and Štore all compliment their larger neighbour with unique and varied attractions of their own. From world-class health resorts and spas to charming tourist farms and idyllic hilltop villages, the region is brimming possibilities for visitors. Located less than an hour’s drive from the capital Ljubljana, Celje and its surroundings are a weekend away just waiting to happen! 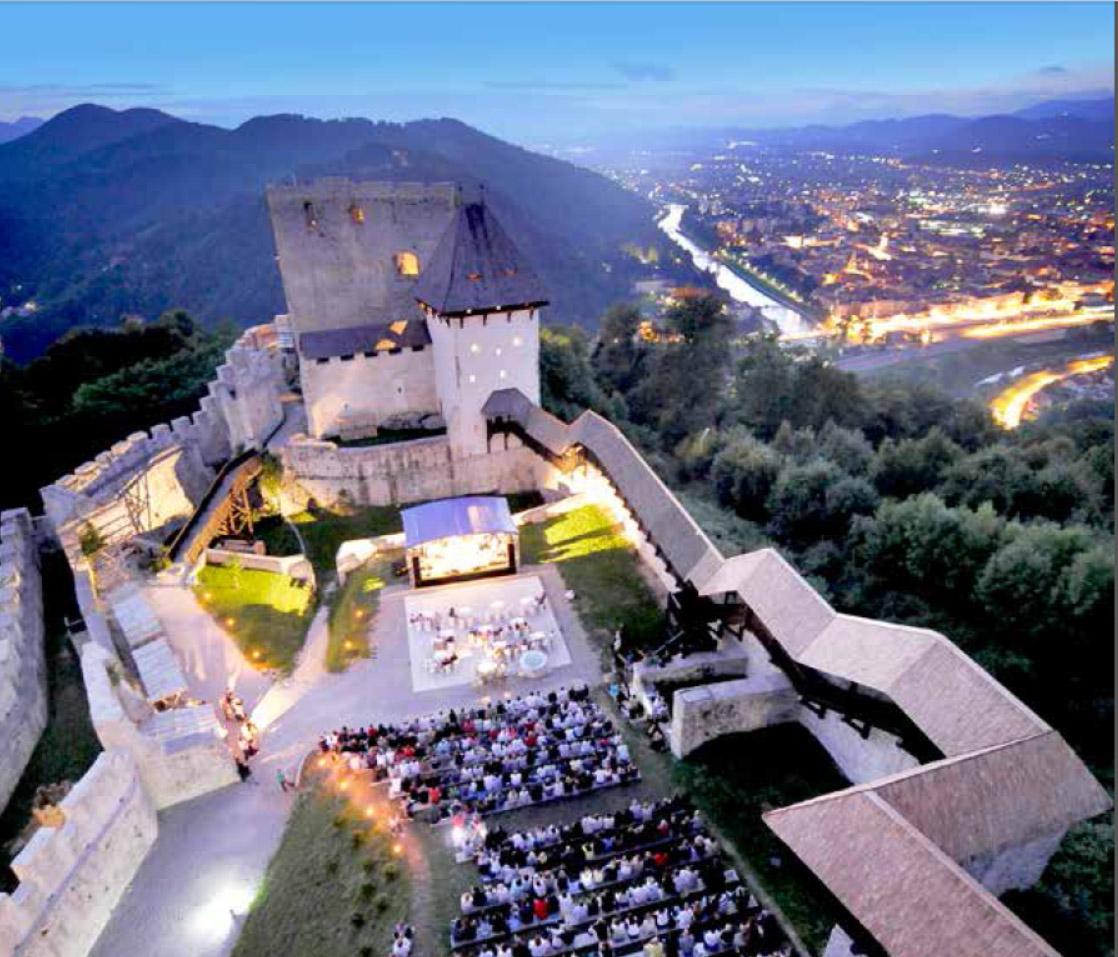 Arguably the grandest castle in all of Slovenia, while it isn’t as completely restored as Ljubljana castle in thecapital and doesn’t possess the breathtaking alpine cliff top location of that in Bled, its sprawling grounds, eventful history, sweeping views over the city and surrounding countryside, and the generally imposing appearance of its partially restored fortress walls and towers are truly unique amongst any and all of its domestic rivals. Originally built by the Heunburg family on the hills to the southeast of the bustling medieval market town of Celje in either the late 12th or early 13th centuries, it eventually came into the possession of the Lords of Sanneck in 1333, who became known as the Counts of Celje from 1341 onwards and were the most important medieval aristocrats in the territory of present-day Slovenia. Over the next hundred years the Counts rebuilt, expanded and greatly improved the castle and its grounds, however, when their rule ended with the murder of the last male heir in 1456, the property was bequeathed to the Habsburg monarchy in accordance with a previously signed inheritance agreement.

Today the castle is the most visited tourist site in Celje with over 70,000 visitors per year, and is also popular with locals, especially during the weekends and for weddings. The grounds are entered from a gate in the southernmost fortifications, where there’s a fully-stocked branch of the Celje Tourist Infomation Office and a little further along a pleasant café.

The central part of the site is dominated by the rebuilt Fredrick’s Tower and an open air theatre, which is the main venue for the various performances that take place during the summer long Living History medieval
festival. After crossing a wooden bridge over the one-time inner moat, you reach the upper part of the castle, where most of the buildings are located and where you’ll find mesmerising views of the city below and
rolling hills and valleys stretching to the alps in the distance. The entire grounds, including some dozen or more sites, are well marked with informative signs giving information and history in both Slovene and English.
To reach Celje’s old castle, take the first turn south of the main train station passing under the tracks, cross the bridge and at the roundabout go right and follow the signs up into the hills. While many people recommend walking to the top, be aware that it’s a deceptively lengthy undertaking (around 45 minutes) and the winding road is largely without pavement. Alternatively, a taxi is only around €4 and for our money.
Celje, Cesta na Grad 78, tel. +386 (0)3 544 36 90

Celeia: a town beneath today’s town

While the area of present-day Celje was first settled as far back as the Iron Age between the 9th and 6th centuries BC, it first flourished after being annexed by the Roman Empire and given the status of an independent town during the 1st century AD. However, after several hundred years the town had sunk back into relative obscurity by the 6th century. This long and rich history of settlement has left Celje with quite an archaeological legacy, some of which can be viewed on an underground tour through the cellars of the Princes Palace on Trg celjskih Knezov 8, tel. +386 (0)3 428 09 62, +386 (0)31 612 618, info@pokmuz-ce.si, www.pokmuz-ce.si. 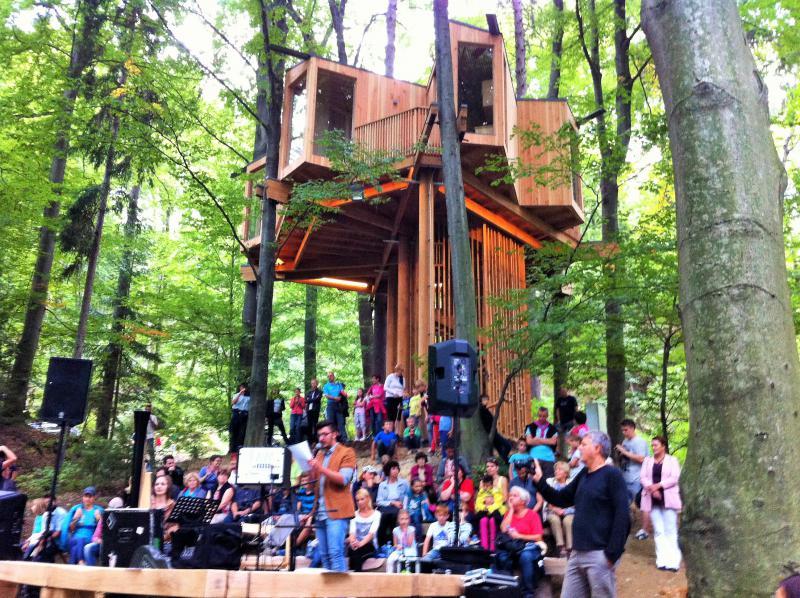 Slovenia is one of the most forested nations in all of Europe, which means that you’re never far from wooded nature – even if you’re in the centre of the country’s third largest city. As part of the Forest for Cities project, the municipality of Celje, in cooperation with the Slovenian Forest Service, has opened a recreational and education treehouse in the forest to the west of town on the south bank of the Savinja river. In addition to the large tree house made entirely of Douglas fir, there is a children’s playground, educational trails, exer-cise stations and dozens of benches. Entry to the treehouse is free of charge, and it can also be rented for group events, with a capacity of up to 30 people. To get there follow the marked path from Mestni Park. +386 (0)3 426 58 65.

Standing in the middle of quaint cobblestoned Glavni Trg, the shrine is one of the most intricate public monuments in the city. A golden haloed Mary is atop a single central column, surrounded at the base by three of her fellow saints: St Rocus, St Florian and St Joseph, who are the patron saints against the plague, against fire and of families and workers respectively. The structure was originally erected in the 16th century for rather more dubious purposes, namely as a sham-ing pillar to punish criminals and other petty offenders. Glavni Trg.

Celje has opened a new Tourist Information Centre, which is an im-portant asset for the city centre. Together with a striking pavilion it represents an interesting tourist destination for foreign and local visitors, a presentation of cultural heritage and a place where tour-ists as well as residents of Celje and other local visitors can find all the necessary information about the city in one place. The Tourist Information Centre also offers an eyecatching, rich selection of local, regional and national souvenirs. A special section of the Tour-ist Information Centre is dedicated to local artists who work in the town’s Art Quarter. Glavni trg 17, tic@celje.si, www.celeia.info.