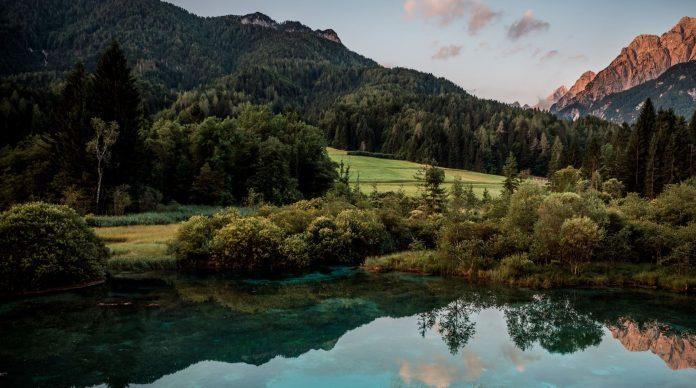 A trip to a natural reserve at lake Zelenci will leave you breathless. You are in for an unforgettable green experience.

Zelenci or Zelenci Nature Reserve, an emerald lake on the northern edge of the Triglav National Park, are the remnants of a large former Podkoreško lake.

Zelenci is one of the most beautiful sights to see or attractions if you will in Slovenia. It is a very popular and Instagrammable spot for photography lovers as the lake is extremely picturesque and generous with all the shades of green. Walk along a special wooden footpath to the lake and its marshy surroundings.

In this natural reserve, many interesting plant species can be found, including the carnivorous sundew, and the animals mostly include amphibians and nesting birds.

“There is nothing more beautiful in Europe than this,”

WROTE SIR HUMPHRY DAVY ABOUT THE BEAUTIES OF THE SAVA VALLEY WITH ITS WATERFALLS AND LAKES.

The swamp with Drni moorland is around 1200 meters long and 150 meters wide on average, with around 200 meters in the widest part and a mere twenty in the narrowest.

In the far western part of the swamp lies the emerald green lake, from which numerous extremely clean and cold streams emerge from the layers of marl, which gives the water its characteristic blue-green color. It is because of this color that the lake and the swamp were named Zelenci (green).

Zelenci do not freeze in the winter, their constant temperature throughout the year is about 6°C. Zelenci and their surroundings were declared a natural reserve by the decree of Jesenice municipality in 1992.

Zelenci was declared a nature reserve in 1992, both for its geological interest and as home to numerous endangered animal and plant species. The area of the nature reserve is 47 ha. The maintained trails feature informational signage, as well as viewing bridges and an observation tower.

The Zelenci nature reserve is a good half an hour’s drive from the Bled area. The path starts at the little restaurant in the parking lot.

If you’re driving from Kranjska Gora, the parking lot is on the left side of the road shortly after the village of Podkoren (5-minute drive). From the parking lot to the lake, it’s a 10-minute walk.

There are a trail and a wooden boardwalk that leads to a viewing platform, where you can see the astonishingly clear and green waters of Zelenci.

Discover the top 5 most Instagrammable lakes in Slovenia here.

TOP Business gifts in 2022 Looking for a unique gift for your business partners? We got you covered with a fine selection of TOP  business...
Read more

Planning a trip to Slovenia in the near future once the global pandemic comes to an end? If the answer is yes, then we...
Read more