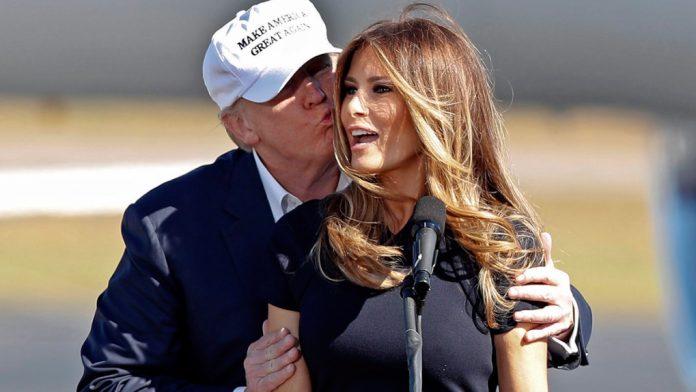 The world knows her as the former American first lady and former President Donald Trump’s wife, but what is the story behind Melania Trump, formerly known in Slovenia as Melanija Knavs.

Unless you have lived under a rock for the past four years, you have probably heard a thing or two about former President Donald Trump’s wife, Melania Trump. Besides Luka Dončić, Goran Dragić, and Anže Kopitar, she is the most famous Slovenian living in the USA.

In this article, we would like to give you a short introduction into Melania Trump’s life and how she was before she married Donald Trump and became the first lady of America.

The early life of Melania Trump

Melania Trump (formerly known as Melanija Knavs and Melania Knauss) was born on April 26 in 1970 in Sevnica, Slovenia, where she also grew up. Her father, Viktor Knavs worked as a car and motorcycle dealer for a state-owned vehicle manufacturer near Novo Mesto in Slovenia. Her mother, Amalija Knavs worked as a patternmaker at the children’s clothing manufacturer in Sevnica. Melania Trump is not an only child, she has an older sister and an older half-brother.

As a young girl, Melania Trump, alongside other children of workers at the children’s clothing manufacturer participated in fashion shows for the brand. This was a turning point for Melania Trump and her love for fashion, design, and modeling was born.

After elementary school, Melania Trump (Knavs at the time), moved to Ljubljana to attend the Secondary School of Design and Photography in Ljubljana. After completing and maintaining her high school education, Melania Trump enrolled in the Faculty of Architecture and Design at the University of Ljubljana, however, she dropped out after one year of studying architecture.

Melania Trump’s modeling career began at the age of five when she participated and walked the runway for the children’s brand of clothes. We could say fashion was running through Melania’s veins.

However, it wasn’t until Melania Trump turned 16, that she started doing some commercial work when she posed for the legendary Slovenian fashion photographer Stane Jerko, who invited her to pose for him.

At the age of 18, Melania decided to change her last name and give it a more Germanized version. She changed Knavs to Knauss. At the same age, Melania Trump, signed with a modeling agency in Milan. Melania Trump modeled for big names in the fashion industry in both Milan and Paris.

In 1995, Melania was modeling in Milan and it was then that she met Metropolitan Models modeling agency co-owner Paolo Zampolli, who was a friend of her future husband and current US President Donald Trump. Zampolli was in Milan on a business trip where he was scouting models. After Zampolli met the future first lady he urged Melania to travel to the United States, where he said he would like to represent her.

Melania Trump took Zampolli’s offer to represent her in United States and sign her to her modeling agency and decided to move to Manhattan in 1996.

While modeling in the United States, Melania Trump modeled in more explicit photoshoots for magazines like Max. In 2000, Melania posed nude for the big January 2000 edition of GQ magazine, where she appeared on the cover in nothing but reclining fur and diamonds. Melania Trump was shot by the famous photographer Antoine Verglas. On the cover, she posed on Trump’s custom made Boeing 727. GQ editor revealed that Donald actually requested that the photographs of Melania must be delivered to his office.

You are probably wondering if the first lady Melania Trump years after the famous GQ cover shoot regrets taking these photos. On the White House website, she actually listed the cover shoot for GQ as one of her greatest achievements.

After the massive success of her nude cover shoot for GQ magazine, Melania Trump landed many big companies for companies like Camel cigarettes. She also landed a spot in the famous swimsuit edition of Sports Illustrated.

Melania turns into an entrepreneur

In 2000, Melania Trump officially became a permanent resident of the US. After scoring many fashion deals over the seas, and being on the cover of the biggest fashion magazines, Melania Trump launched her own jewelry line, named Melania Timepieces. The jewelry line was sold on QVC. A couple of years later she also launched and marketed her own skincare line, under the name Melania Skin Care Collection, which was sold in only high-end department stores across the country. Both the jewelry and skincare line were terminated in 2017.

Path to becoming the first lady of the USA

Melania Knavs (or Knauss) met her future husband and President Donald Trump in 1998 at a party. Donald Trump was working as a real estate broker at the time. The couple began dating, while Donald Trump was still in the divorce process with his second wife Marla Maples. Their divorce was finalized a year later.

Donald “poped” the question in 2004 and the couple became engaged. Melania Knavs married Donald Trump in 2005 in Palm Beach, Florida. This was and still is Melania’s first marriage, while for Donald Trump it is the third (third time is the charm, right?). The wedding of Melania and Donald Trump was huge as one can only imagine. Many celebrities attended the wedding reception such as Heidi Klum, P. Diddy, Shaquille O’Neal, Hilary, and Bill Clinton, Barbara Walters, and Simon Cowell. Just to name a few …

A year later they welcomed their first son, Barron Trump.

Despite a few bumps in the road or speech at the 2016 Republican National Convention, which was plagiarized and copied from Michelle Obama’s speech, a lawsuit against the Daily Mail, General Trust and Reporter she still managed to overcome all the scrutiny while the presidential campaign was running, and didn’t show and signs of slowing down the Trump campaign.

The most popular Trump in the White house

After a few scandals, which were minor if we compare them to Trump’s tweets. Melania Trump became the most popular Trump in the White House. A February 2019 Fox News poll had the first lady has a 47 % approval rating after two years in the White House, compared to the president’s 43 %. Slovenians have a way to growing on you.

Melania’s work as the First lady and awareness campaigns

Melania told the news outlets in 2016 what will she be campaigning for if her husband Donald Trump wins the 2016 presidential election. She decided she would use her power to help women and children. Furthermore, her main would be to stop cyberbullying especially between children in the US.

In one of her interviews, she stated: “Our culture has gotten too mean and too rough, especially to children and teenagers. It is never OK when a 12-year-old girl or boy is mocked, bullied, or attacked. It is terrible when that happens on the playground. And it is absolutely unacceptable when it is done by someone with no name hiding on the Internet.”

On May 7, 2018, Melania Trump formally started the Be Best public awareness campaign, which focused on well-being for youth and advocated against cyberbullying and drug use.

Melania Trump took a major step when she embarked on her first solo international trip in October 2018. The first lady spent the five-day, four-country tour in Africa exploring programs dedicated to childhood well-being.

The first lady Melania Trump also made occasional appearances throughout the novel coronavirus pandemic, either in front of socially distanced reporters or through video messages. She urged the people of the world to use face masks during the epidemic.

Many politicians or royal families are no strangers to being thrown under a lot of scrutiny due to making expensive decisions. Melania Trump is no stranger to this. She is known to have an expensive taste especially when it comes to fashion.

Since she had a background in fashion, she had the opportunity to get to know many designers and really develop her style. Melania Trump became a true fashion icon after Donald Trump’s inauguration on January 20, 2017. Vogue has compared Melania Trump’s wardrobe as the first lady to that of Jacqueline Kennedy and Nancy Reagan. She closely works with designer Hervé Pierre, who is her stylist, and prefers “strongly tailored pieces” in bold colors and almost exclusively wears high-end designers

Her wedding dress reportedly cost her generous husband Donald a whopping 200,000 dollars. The dress was made by the legendary designer John Gallian, who at the time worked for the house of Christian Dior. YOu can put a price on happiness, right? And you only get married once (not in Donald’s case, but you know, perhaps in Melania’s)

Melania and her son Barron did not move into the White House immediately. They decided to say in New York City until the end of Barron’s school year. This decision came to a hefty price tag for security measures, it was reported they spend around 27 million dollars on security by staying in New York.

A couple of months later, media sources tried to rip Melania’s fashion choice apart, when she wore a $51,500 Dolce & Gabbana jacket to at the annual G-7 summit in Catania, Italy. Critics slammed her for wearing an outfit that cost more than most Americans earn in a year.

Following the “Dolce” incident, Melania Trump “toned down the pricey clothing”, though she still wore a $1,380 Balmain shirt to Michelle Obama’s vegetable garden.

Melania Trump faced another fashion scandal in August when she was spotted wearing sky-high stilettos heading to an area devastated by Hurricane Harvey.

In January 2018, The Wall Street Journal reported that during a three-month period where she lived in New York in 2017, she took Air Force jet flights between New York City, Florida, and Washington at a cost of more than $675,000 to taxpayers.

On 5 July 2019, a wooden statue carved out of a tree trunk with a chainsaw was unveiled by the Sava river in Rožno, near Melania Trump’s hometown Sevnica in Slovenia. The artwork was commissioned by U.S. artist Brad Downey, who hired a local craftsman and artist Aleš Župevc to create the wooden statue. The statue is styled after the blue Ralph Lauren dress she wore during her husband’s (Donald Trump) presidential inauguration in January of 2017. The local reception of the statue was mixed. Melania has yet to comment on the statue.

How old is Melania Trump?

Where is Melania from?

Despite Melania Trump currenlty living in the USA, she was born in Slovenia.