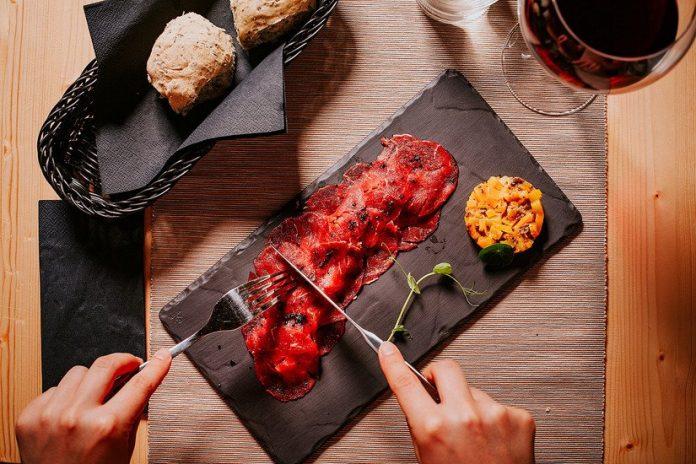 Valentine’s Day is only days away and it represents an opportunity (or perhaps an obligation depending upon whom one speaks to) for men to show their wives, girlfriends, partners, mistresses and/or long-time crushes that they do in fact understand what it means to be romantic. However, you don’t need to wait for Valentine’s Day to treat your special someone to a good meal.

With this thing in mind, we have prepared a list of TOP Romantic restaurants in Slovenia.

This elegant restaurant and wine bar is a great place to enjoy a drink and gourmet nibbles while soaking up the atmosphere of Ljubljana’s Old Town – either outside on the narrow cobbled street or inside under the restored red brick ceilings and glowing Edison lights. The menu at one of the most romantic restaurants in Slovenia is primarily focussed on traditional cuisine from the coastal region of Istria, with a diverse selection of hot and cold dishes that all pair well with the extensive wine list, the latter coming as no surprise since the place happens to be run by Matjaž Čok of the winemaking Čok family, who also supply the olive oil and brandies.

Located in the stately four-star Hotel Triglav Bled (which, you guessed it, was founded in 1906), a meal here is guaranteed to be a fine dining experience of the highest order, not to mention its stunning location make the top of our list of most romantic restaurants in Slovenia. The kitchen team creates some simply wonderful dishes, all of which are modern interpretations of traditional Slovene recipes, methods, and ingredients, and views of Bled Lake and its famed church from the bay windows is truly stunning. It’s of our personal favorites, and we’re not alone, in 2011, the restaurant and its culinary school was awarded the prestigious Jakob Prize, given each year at Slovenia’s largest tourism fair to only one worthy winner.

While the name will almost inevitably bring to mind images of the 2008 Owen Wilson/Jennifer Aniston romantic comedy and its titular yellow Labrador, we assure you that that’s strangely only a matter of coincidence and definitely shouldn’t affect your judgment of this adorable little bistro in the old town, which has long been one of our favorite spots to bring guests in Ljubljana. With just a handful of tables, soft lighting, copious amounts of exposed wood and lots of rustic charm, it’s one of the most romantic restaurants in Slovenia, and the service is both attentive and genuinely personable. The menu has a strong Mediterranean influence, with a concise yet varied selection of exceptional salads, pasta, meat, and fish dishes – just make sure to save room for dessert.

Roundly regarded by gourmands, amateur foodies, tourists and locals alike as one of the best restaurants in the country, and currently ranked as the 38th best restaurant in the world, it’s not uncommon for diners to make the trip to Slovenia for the express purpose of eating here. Run by a husband and wife team, Ana Roš, who has long been hailed as one of the best female chefs in the world, is in charge of the kitchen, while Valter Kramar’s knowledge of Slovenian wines and cheeses is unrivaled. Set in a rustic villa outside the town of Kobarid in the far west of the country, a meal here is in high demand, with reservations being mandatory. The jaw-droppingly impressive and exceptionally Instagram-friendly tasting menu features dishes that change with the seasons, or as a stroke of genius hits Roš, making your meal a one to remember. With its rustic charm in the stunning Kobarid Hiša Franko is without a doubt one of the most romantic restaurants in Slovenia.

Despite being a little out of the way and not possessing the most inspiring of interiors, Restavracija Mak has forged a reputation as Maribor’s finest restaurant which is why we have listed it on our list of most romantic restaurants in Slovenia. Restavracija Mak is a true testament to the supreme quality of its food if ever there was one. For guests, a meal at Mak is an education in appreciating the art of cooking, something that is increasingly being lost in the fast-pace of the modern world. Its attention to detail is truly second to none.

Much to the delight of local foodies (ourselves included), the ‘neo-bistro’ concept, where a classically-trained chef leaves behind a grand, often Michelin-starred restaurant to pursue a unique culinary vision at their own establishment Monstera Bistro also makes our list as one of the most romantic restaurants in Slovenia. Bine Volčič, one of the best-known chefs in the country, and his wife Katarina run the lovely little Monstera, cheekily named for the tropical plant that was ubiquitous during Yugoslav times – alluding to the fusion of nostalgic tradition and modernity that is the trademark of Bine’s cooking. In lieu of à la carte options, there are weekly set lunches, while dinner consists of a heavenly 7-course chef’s choice tasting menu. The drinks list is equally impressive, with superbly paired wines, specially produced own-label craft beer and carbonated tap water on draught.

Perched high up in the archer’s tower, this award-winning restaurant at Ljubljana Castle overlooks the city from a grand position. A romantic story in writing, indeed. A combination of the Roman Emona, Medieval and modern in terms of both cuisine and ambiance, the menu was created with the help of top ethnology professor dr. Janez Bogataj. historically reminiscent dishes of slick gourmet modernity are crafted with ingredients from Ljubljana’s famed market by the star of the show: Igor Jagodic. Recognized as one of the top three chefs in Slovenia, he was previously at the renowned Vila Bled and now takes care of the sublime offerings at Strelec – which is one of our favorites and for sure one of the most romantic restaurants in Slovenia.

In the village of Šentjošt nad Horjulom is the delightful little inn called Grič. Many places may claim the old ‘traditional food with a modern twist’, but Grič certainly delivers on that promise. It all starts with Luka Košir, one of the best young chefs in Slovenia. Everything used in their dishes is sourced locally, and the kitchen has a strict zero-waste philosophy, which is made easier by Luka’s novel techniques of fermentation. The emphasis here is on always fresh seasonal dishes, so expect a completely different menu depending on the time of year.

The latest addition to Koper’s culinary arsenal, if the home page of Capra’s website doesn’t immediately make you head to the phone for reservations we aren’t sure what will. Capra is without a doubt in our minds one of the most romantic restaurants in Slovenia with its stunning interiors and amazing food. At Capra, everything lives up to this tantalizing tempter in person, with an inventive menu divided by color (it makes sense, trust us) and a selection of excellent steaks, octopus, squid and much much more. Sure, it isn’t the cheapest, but it’s worth the extra cents you’ll shell out. Yes, that’s a seafood pun.

One of Slovenia’s first truly world-class restaurants when it opened its doors in the center of Ljubljana some two decades ago, in the years since it hasn’t missed a beat, still serving some of the very best Mediterranean-inspired cuisines in the city. For us, the true standouts on the menu are the fantastic seafood specialties (both starters and main courses), but you also can’t go wrong with the steaks, grilled to order on an open fire. When in doubt, you can rely on the friendly and professional staff for recommendations, as well as guidance with the equally superb wine list. A must for lovers of extravagant dining and the spot to dine at on Valentine’s Day!

Which are Slovenian oil makers?

Maja Mikek is a solid force of both business and heart. In her role as CFO, Maja is responsible for the financial operations of...
Read more

If you’ve never been to Brda before, Dobrovo Castle (or Grad Dobrovo in Slovene) is a logical first stop on your visit to the country’s...
Read more

Bled is one of the most charming destinations in Slovenia that attracts many tourists every year. Bled is not only known for its tiny...
Read more