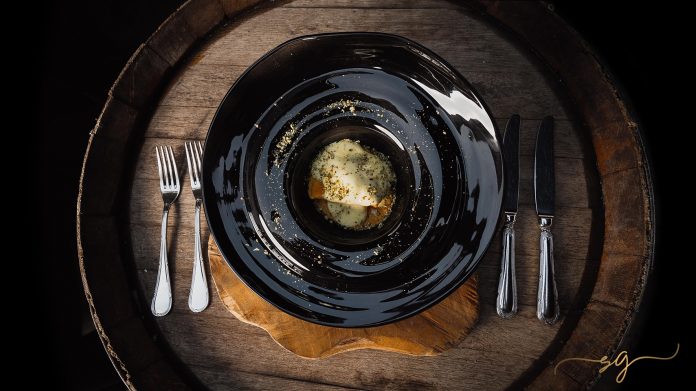 Last week, we visited a Michelin awarded restaurant or better-said gostilna in Piran. Stara Gostilna or as the proud owners Donata and her husband Tomaž alongside the locals call it Stara Gostilna Vecchia Osteria tucked in one of many the lovely coastal streets in one of the most beautiful seaside cities on the Mediterranean coast.

Stara Gostilna in Piran is one of the first restaurants or gostilnas open in Piran, decades ago. Donata Krašek and her family have been running Stara Gostilna since 1997 with great passion and drive to present their guests with the most memorable plates one has ever set their eyes on. Stars gostilna is the new experience on the coast! Piran can surprise with an amazing sunset but also now with one of only three Michelin plates on the coast! An intimate and glamorous restaurant where the black magic color scheme provides the setting for designer-style furnishings, lights, and armchairs – this old inn was given a new look three years ago to mark its tenth anniversary here in the center of beautiful Piran. The NEW young chef has updated the menu to offer a wide selection of modern local dishes with fish, top-quality meat, shellfish, oysters, foie gras. There is a good selection of 350+ wine labels, spirits menu with which to round off your meal.

“An intimate and glamorous restaurant where the dark-and-grey color scheme provides the setting for designer-style furnishings, lights, and armchairs – this old inn was given a new look some years ago to mark its tenth anniversary here in the center of beautiful Piran. The young chef has updated the menu to offer a wide selection of generous, modern dishes, many of which feature expensive ingredients such as top-quality meat, shellfish, oysters and foie gras. There is a good selection of spirits with which to round off your meal.”

As we were kindly sit down, admiring the stunning ambiance of Stara Gostilna, we could not stop turning our head (not even our kids). The interior of Stara Gostilna in Piran is truly something else. If you are anything like me, then a visit to Stara Gostilna is a definite must as place “screams” interior design goals. The restaurant is beautifully decorated and one immediately sees how much attention to detail there is, in designing and decorating Stara Gostilna in Piran. Donata graciously told us that she and her husband Tomaž, renovated Stara Gostilna about four years ago. And boy, did they do a splendid job renovating it!

As the menu at Stara Gostilna was placed in front of me, another meticulous detail popped out. Restaurant menus at Stara Gostilna are covered in real velvet. Now, this is something I have rarely seen in a restaurant. The menu is completely new and it was worked on for about a year, says Donata.

Besides the impressive a la carte menu at Stara Gostilna in Piran, they also have an impressive wine card. Here, you can take a sip of the best Slovenian as well as international wines. At Stara Gostilna they also offer a fine selection of French wines, which surely did not go unnoticed by the Michelin appraisers. You see, the famous French guide often checks foreign restaurants in how they serve French wines. Those that do this well, seem to have an advantage during their selection of (new) Michelin starred restaurants. This is probably one of many reasons Michelin honored Stara Gostilna in Piran, in addition, of course, to the truly succulent food they present at their plates and tables.

Among the extensive selection of both Slovenian and international wines, you will also be able to order a glass of bubbly. Stara Gostilna has some amazing French champagnes for you to choose from. What was just as impressive to me was the fact that at Stara Gostilna, you will be able to taste orange wines, which have over the last couple of years become increasingly popular yet again.

We have been informed during our lunch at Stara Gostilna that they have a new young chef who previously worked at a two-Michelin-starred restaurant in Ireland. The former chef, Gradimir Dimitrič left Stara Gostilna in Piran to work at Kempinski across the Slovenian border in Croatia. Now, the head chef Irhad Jusić is the newest, not to mention the youngest addition to the Stara Gostilna team. With only 20 years of age, he has an impressive gastronomic resume, that even his older peers could be jealous of, he is also one of the youngest and most awarded chefs in Slovenia. During our conversation at Stara Gostilna, chef Irhad Jusić also mentioned he learned a lot from chef Igor Jagodic, who runs the restaurant Strelec in Ljubljana.

As delicacies prepared by chef Irhad Jusić were presented to us, I admired stunning plates on which the beautiful culinary works of art are placed upon. At Stara Gostilna every plate is unique, we were told by owner Donata. At Stara Gostilna, they change the plates twice per year. Hence, if you visit them twice in a year, the chances of you not seeing the same plates are actually pretty big.

Before we officially “dig” into what courses we enjoyed during our lunch at Stara Gostilna in Piran, I have to mention that the staff was incredibly attentive. Donata told us that the majority of staff previously worked at Hiša Torkla. During our conversation, the head waiter took our children to get some ice cream, to the nearby amazing ice cream shop. The children loved the ice cream and had fun exploring the kitchen later on as the staff took them to see what goes on “behind the scenes” and how the talented chef Irhad Jusić prepares dishes. In all my years of dining in the best restaurants both in Slovenia and abroad I have never experienced such service and care for children of guests, as I did at Stara Gostilna. Hats off to Stara Gostilna in Piran for their fantastic approach!

Now to crown the so-far memorable experience, let’s take a look at the food at Stara Gostilna in Piran. We started our lunch with an appetizer that consisted of homemade butter with rosemary, beautifully presented in a saltwork styled container decorated with seashells. What a stunning presentation! The truffle butter spread nicely over homemade bread, baked at Stara Gostilna in Piran, alongside delicious focaccia.

The next stop or I say next dish, was a surprise after the cold entry. Irhad Jursić pleasantly packed freshly prepared oysters, on ice, in an elegant wooden box. Again what an innovative presentation!

The dishes of fish and scallops were mouthwatering and visually, a work of art. Presented on the beautifully designed plates, scallops met pea tendril and fish bathed in a foam of avocado. Our children enjoyed delicious home-made fuži (Istrian typically shaped pasta) in a strawhat-like plate! Last but not least the dessert! A pannacotta with strawberry ice cream, reduction of fresh berries and homemade crumble. I could say this dessert truly was the cherry on top of our lunch at Stara Gostilna.

Before we left Stara Gostilna we had a chance to chat to Uroš Rojac, an amazing wine producer from Slovenia, as he was sitting at the next table. His Rojac vinery is known for finest and award-winning refošk, popular not only among Slovenian but also foreigner wine enthusiasts. He shared some of his winemaking stories and hinted to exciting new plans in his vineyards, which seemed like a special treat in addition to our stellar experience at Stara Gostilna in Piran.

Perhaps the only downside that I noticed was a small number of tables at Stara Gostilna in Piran, however, this may well be one of the greatest advantages: providing its guests with a more intimate setting. So a good thing to keep in mind before you head to Piran is to make sure you have a reservation at Stara Gostilna. And note that Stara Gostilna in Piran is hidden away from the main streets of Piran, so it is calmer and cozier but also on account that it does not have a seaside view from their restaurant. This is, in my view, largely compensated by the slight breeze coming from the shore and a welcome shadow during the summer heat.

At Stara Gostilna they will surely awaken all your senses with culinary masterpieces of their creative chef Irhad Jusić and top staff. You may even discover some of your dormant senses awakening! You are thus warmly invited to experience the cuisine at Stara Gostilna in Piran, tasting their equally delicious and gorgeous dishes made from local and fresh ingredients.

Stara Gostilna in Piran is one of the rare restaurants in Slovenia and the only Michelin awarded restaurant, which is open all year round. Therefore, if you visit Piran in the summer like me and my family, or during the winter, the doors of Stara Gostilna are always open for you.

For more information on Stara Gostilna in Piran click here.