I’m a passionate, 100% self-taught sourdough baker from Slovenia. I’m a translator and teacher by education and previous career, but I found my greatest passion and obsession in sourdough. I started baking in 2012, when my husband Sašo had his gallbladder removed and could no longer eat yeasted bread due to bloating and other health issues. I began researching what other ways there were to bake soft, crusty, and delicious bread. Lots of online reading and a library of foreign books later, I finally remembered that my grandmother used to bake bread in a different way – by saving a small portion of dough and drying it for the next batch.

All of a sudden everything clicked into place! My first attempt to make my own starter – a simple fermenting mixture of flour and water – wasn’t successful. I didn’t give up, and made my second one and it thrived. This second starter has been with me ever since. I named him ”Rudl” and now he is the most famous Slovenian sourdough starter.

In 2016, Puratos invited me to Belgium to explore the First Sourdough Library in the World. Since then, I’ve become one of the first 13 ambassadors for the library and its online version, The Quest for Sourdough, to promote the use of sourdough around the world. Scoring bread doesn’t only help bread rise in the oven, but you can also get super creative with it. That’s what I did; tracing intricate and inspiring patterns along my bread’s crust.

Then I started gifting my bread to family, friends, and relatives for special occasions or just as something nice. And everyone loved it! So I decided that I wanted to share my passion with the rest of the world and created my IG account, posting my first SD bread photo in October 2016.

I have started teaching sourdough baking around the world; 9 countries, 3 continents. (Lisbon, Moscow, Kingston, Singapore, Bangkok, Stratford-upon-Avon, Zagreb, Amsterdam, St. Vith just to name a few locations). In 2017, I published a unique sourdough book, the first of its kind in Slovenia, with more than 300 pages. The book has received the Gourmand World Cookbook Award in two categories.

It’s also claimed the title of fastest-selling bread cookbook in the country (the 3rd print is out already, and translations into foreign languages will be out by the end of this year). I’ve started a real bread revolution in Slovenia; more and more people are joining in to bake healthier and more delicious bread. It’s real Sourdough Mania here.

Her book Drozomanija, the first of its kind in her homeland, was published in December 2017, and sold out in just three months. On more than 300 pages and with more than 45 recipes she teaches in detail how to start SD baking from scratch, like she has learned, and that the sourdough bread doesn’t need to be sour at all!

The book Drozomanija has been awarded at the Gourmand World Cookbook Awards 2019 in two categories: Fund-Raising (Europe) and the Best Bread Book.

Its 304 pages make Sourdough Mania the most extensive and first Slovenian book on baking with sourdough starter, made unique by the breadth of ideas it has on cooking with starter. It has been inspiring both beginners and seasoned sourdough veterans. Sourdough starter makes baked goods more digestible, gives them a longer shelf life, and lowers their glycemic index, all while being more flavorful and filling us up more quickly.  The book features 45 simple-to-make recipes and more ambitious recipes for more festive occasions, recipes that respect Slovenian traditions and also consider a wealth of other culinary and cultural heritage. Readers will get to feast their eyes (and later stomachs) on rye bread, simple white bread, corn bread, buckwheat bread, fruit bread, donuts, brioches, Slovenian potica, and much more! Take a look at the Table of Contents for more recipe ideas. Sourdough Mania contains the chapters From Grain to Starter, Your First, Sending a Starter SOS, and more. You’ll also find space to jot down recipes,
baking schedules, a glossary, a breakdown and diagram for baking, and so much more. In-depth detail and pictures worth a thousand words (of weighing, mixing, kneading, shaping, scoring, and baking) take you on a journey to the healthy world of sourdough baking made easy. The book is adorned by photography from Primož Lavre and illustrations commissioned by the author. 2 euros from every book sold are donated to Liza, a 7-year-old girl with cerebral palsy, and her treatment.  So let Sourdough Mania take hold of you, but forewarned is forearmed: there’s no turning back! Once you start baking with sourdough, you’ll never stop!

What is in the Sourdough Mania book? 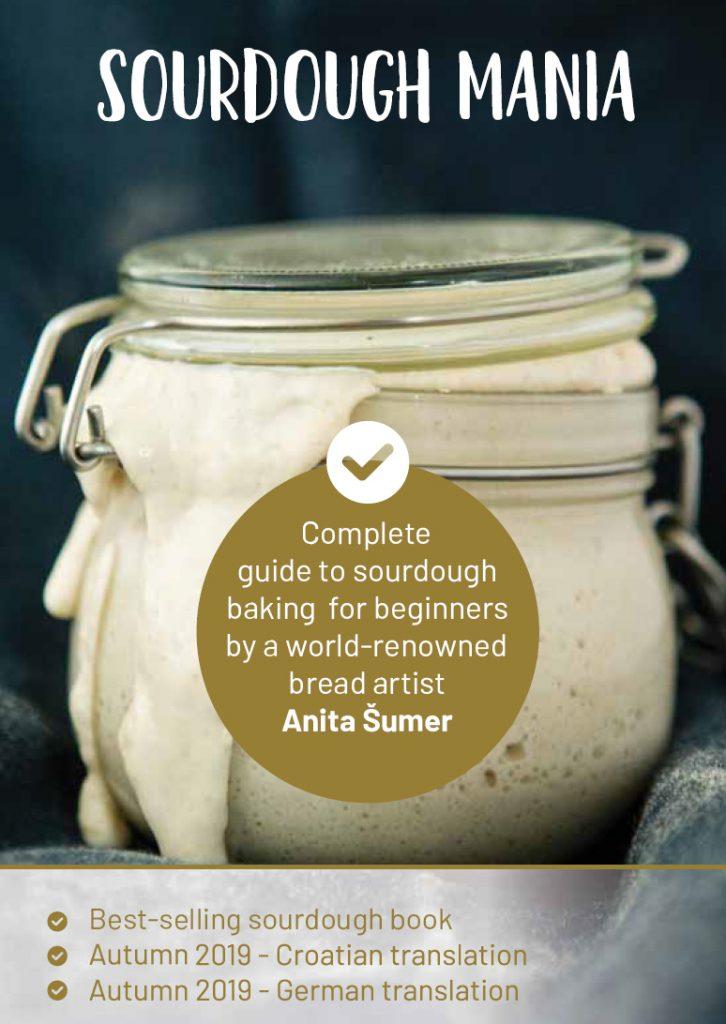 She has started a SD bread revolution in Slovenia and continues to spread the love for SD baking around the world by teaching and promoting the benefits of SD bread. With her FB group and IG sourdough_mania (72.000+), she has caught the attention of media around the world: Buzzfeed, Daily Mail, Business Insider, Food&Wine,  UNILAD,  You’re  Gorgeous …