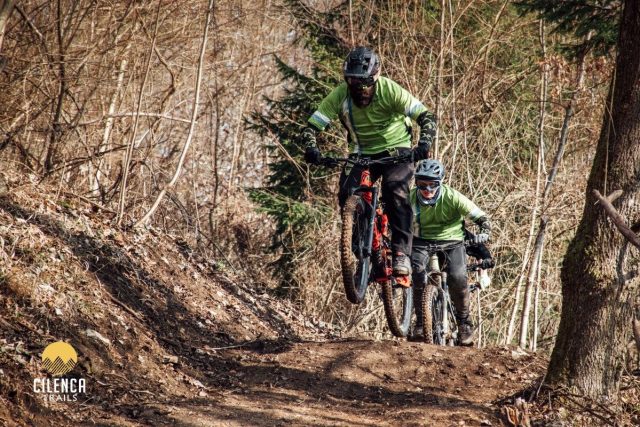 At the opening of the bike park, mountain biking tours along the park’s paths, animations for the youngest and musical accompaniment will be organized. Food and drink will also be provided at the event. There will also be organized transport to the top of the park, from where you will be able to drive along well-maintained paths and get to know the natural features and varied relief of Zagorje ob Savi.

Cilenca Trails – the newest addition to Slovenian bike parks
Cilenca Trails Bike Park will be full of adrenaline and new experiences for both professional MTB riders and beginners. Slovenia is truly becoming a world-renowned cycling destination with the development of many bike parks around the country, one of which is set to be open in May or June of 2021. MTB enthusiasts from Slovenia and […]

The area of ​​the mountain bike park covers a large part of the Cilenca hill on about 16 hectares. Access to the top of the park is arranged along the road towards Vine, and the end of the mountain bike trails is located at the end of Europark, opposite the Pumptrack Zagorje polygon. Until the official opening of the mountain bike park, the Zagorska Dolina Cycling Club arranged and completed four routes. The first so-called “Flow line”, which is full of sloping turns, waves, and jumps. The Flow line measures 2 m and is 1.6 km long and will be suitable for the widest circle of users. At the same time, three additional lines were built that are slightly longer and technically more demanding.

In the early spring, the club also arranged a bridge at the end of the park and an intersection with the existing footpath in the area to reduce the speed of cyclists and ensure safety. By the end of 2022, the bike club plans to complete the remaining routes and establish a so-called “Skills park” for learning the basics of mountain biking and a circular XC route.

Use of the park will be free for all users. The Zagorska Dolina cycling club will continue to manage the park, together with club members and volunteers who take care of maintenance and safe driving.

Cilenca Trails Park is carefully designed for all levels of knowledge, the difficulty of each route is different, which allows you to gradually learn the skills of the sport and the possibility of safe progress in driving. The mountain bike park, together with the pumptrack polygon, an accompanying facility, and a “skills park” for learning the basics, will become the center of cycling in the region and the starting point for other routes in the municipality.

In 2019, the Zagorska Dolina Cycling Club noticed an increased interest in mountain biking among both younger and older populations, and thus began a project to obtain all necessary permits and consents for the construction of the newest mountain bike park in Slovenia.

As part of the Cilenca Trails Park, during the cycling season, which runs from March to about November, the club will organize group mountain bike training programs, run workshops on riding techniques, teambuilding for closed groups, a small mountain biking school for the youngest and other educational events and one-day events and competitions, which will further enrich the tourist offer of Zagorje.

Already in 2022, according to the president of the Zagorska Dolina cycling club, they are planning the first race of the SloEnduro series for the Slovenian Cup in the enduro discipline, which will take place on the paths of the Cilenca Trails mountain bike park.

Top Slovenia interview: Andraž Grum
Andraž Grum is the president of the Kolesarski klub Zagorska Dolina and a huge MTB enthusiast, as well as a mountainbike instructor and guide. Andraž Grum and his devoted team of trail builders are building the newest Slovenian bike park, Cilenca Trails, which is located in Zagorje ob Savi and scheduled to be open in […]