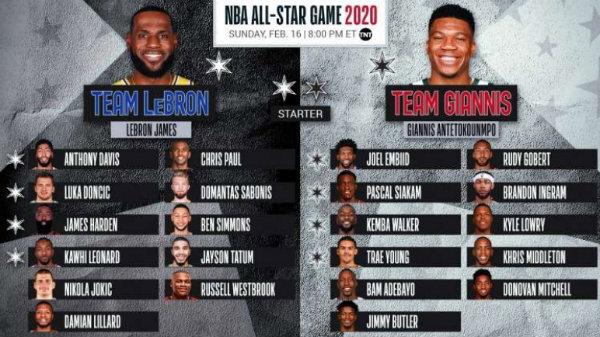 The 2020 NBA All-Star Game was played on February 16, 2020. The game was held at the United Center in Chicago, Illinois.

Players were taking charges, double-triple shots, bodies were hitting the floor, calls and non-calls were being screamed about on both ends. The fourth quarter of the NBA All-Star Game was as intense as the final moments of a playoff game, the biggest stars in the league holding absolutely nothing back.

One of the best NBA All-Star games ever

The 2020 NBA All-Star Game is officially in the books now. After an extraordinary weekend of events, the league’s superstars saved the best for last. Trailing by nine points after three quarters, Team LeBron fought back to give us the greatest ending in All-Star Game history. The new Elam Ending set the target score at 157, and both sides fought with all they had to get there first. When the dust settled, it was Team LeBron that ended up on top.

It was the first NBA All-Star Game with a new format. The teams played a mini-game in each of the first three quarters, the scores starting at 0-0 in each of those periods and the winning team in each one earning $100,000 for their Chicago-area children’s charity. LeBron’s’ team won the first quarter 53-41, Antetokoumpo’s team won the second quarter 51-30. The third quarter had down-to-the-wire, big-money drama with $100,000 on the line. But the teams finished the quarter tied 41-41, putting $300,000 – the undecided $100,000 from the third and $200,000 more for the win – at stake in the final period.

With the win, Team LeBron earned $400,000 for their nominated charity, Chicago Scholars, while Team Giannis earned $100,000 for After School Matters.

Luka Dončić’s natural play has been redemptive, and his ability to accrue numbers within the confines and flow of the game is historic. The Slovenian All-Star, Luka Dončić played a total of 17 minutes and 31 seconds during the All-Star game. It was the second-fewest on Team LeBron, just ahead of Jayson Tatum. Let’s hope in the next NBA All-Star Game he will get more time on the court.

During the NBA All-Star game on Sunday, the NBA Family and its members paid several tributes to Kobe and his daughter. The main tribute was led by Magic Johnson. Rapper and producer Dr. Dre released a compilation video of Bryant prior to the game. Singer Jennifer Hudson sang as pictures of Kobe faded in and out of the background. The stage during Chance the Rapper’s halftime performance turned into a basketball court with video clips of Bryant.

Among other tributes honoring the late NBA star Kobe Bryant were the numbers on the jerseys. James’ team wore blue jerseys, all with the No. 2 for Gianna Bryant. Antetokounmpo’s team wore red, every player wearing No. 24 on the back for Kobe Bryant. And on their right shoulders was a black circular patch with nine stars, one for each victim of the helicopter crash that took the lives of Bryant, his daughter Gianna, and their seven friends on 26 January. It is safe to say Bryant’s presence was definitely felt.

Perhaps no one in recent history cared more about winning the All-Star Game than Kobe Bryant. In the honor of Kobe’s basketball legacy, the NBA association decided to rename the MVP award for the NBA All-Star game last Saturday. After the NBA All-Star game, Kawhi Leonard was named the first winner of the Kobe Bryant MVP Award. Leonard was on Team LeBron with Luka Dončić, which defeated Team Giannis 157-155 with a game-winning free-throw from Anthony Davis. This was the first year the game was played to a target score.

After the game, Leonard said to the press: “It means a lot to me. Words can’t even explain. I wanna thank Kobe for everything he’s done for me. All the long talks and workouts, this one is for him.”

Records are meant to be broken

Team LeBron and Dončić tied a single-quarter record with 53 points in the first quarter, James set the record by starting a 16th All-Star Game (breaking a mark he shared with Bryant), and James moved past Kareem Abdul-Jabbar for most All-Star minutes in a career.

Coronavirus in Slovenia: More uncertainty ahead as an epidemic in Slovenia...

Coronavirus in Slovenia: More uncertainty ahead as an epidemic in Slovenia...