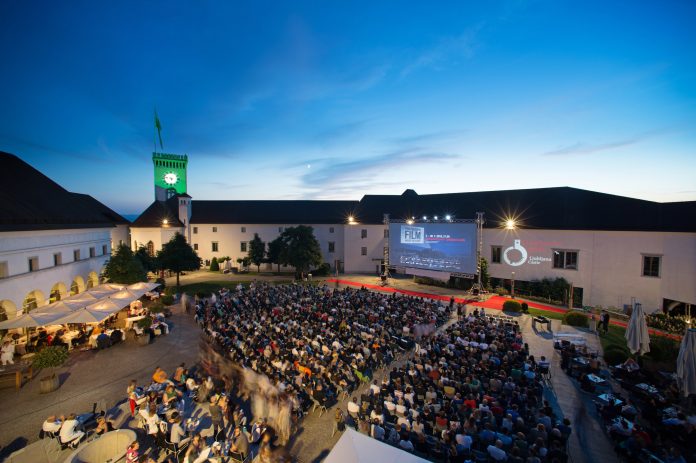 Films are screened in their original language with English subtitles. English spoken films are screened with Slovenian subtitles only. In the event of rain or bad weather forecast, screenings are canceled. In the event of cancellation, films will be screened the following evening at 21:30 at Kinodvor. In the case of Avant Premieres and Special Screenings, three additional screenings will take place the following evening at Kinodvor.

In 1989, the very idea of a competitive all-female sailboat crew was nearly inconceivable to the manly world of open-ocean yacht racing. They’d never make it to the start, much less survive to the finish. Tracy Edwards proved them wrong. The 26-year-old skipper, her second-hand racing yacht Maiden, and her seasoned crew became the first-ever all-woman challenge to the Whitbread. “A mighty tale about the majesty of the human spirit and the power of women, and it’s all true.” – LA Times. (English spoken)

A family tragicomedy depicting the inevitable collision that ensues when Ki-woo, the eldest son in a family of four unemployed adults, is introduced to the wealthy Park family for a well-paid tutoring job. “Troubling and wildly entertaining.” – The New York Times. Parasite won the Palme d’Or in Cannes, took home most Academy awards and became the first non-English language film in Oscar history to win the award for Best Picture. (English subtitles)

Los Angeles 1969. An ageing TV star and his longtime stunt double make their way around an industry they hardly recognise anymore. A tribute to the final moments of Hollywood’s Golden Age and Tarantino’s most personal film to date. “An absolute blast, a pure, giddy rush of thrillingly confident, expansive filmmaking that showcases the most resonant and satisfying storytelling Tarantino has given us in over two decades.” – Sight & Sound. Golden Globe for Best Motion Picture – Musical or Comedy and Oscar for Best Performance by an Actor in a Supporting Role. (English spoken)

A renowned filmmaker in physical decline (Antonio Banderas) experiences a series of re-encounters, some in the flesh, others remembered. His childhood in Valencia, his first adult love, the pain of the breakup, and his discovery of cinema. The Spanish director’s autobiographical ode to the craft of filmmaking won the Best Actor award at Cannes Film Festival and an Oscar nomination for best international film and best actor. “Perfect cinema.” – El Mundo. (English subtitles)

In a forested valley between Italy and Yugoslavia in the mid-20th century, a stingy widower befriends a young woman and helps her depart in search of a new life across the ocean. A chance encounter gives rise to a dreamy fairy tale on loss, regret and the power of imagination. “With [this] extraordinarily poetic work, Božič is putting himself forward as a new voice in contemporary Slovenian cinema.” – Cineuropa. The Vesna award winner for best Slovenian film had its world premiere at the Toronto film fest. (English subtitles)

Woody Allen’s latest romantic comedy tells the story of college sweethearts Gatsby and Ashleigh, whose plans for a romantic weekend in New York City are dashed as quickly as the sunlight turns into showers. “Contemporary riff on the facades of money and power, elevated by three terrific lead performances.” – Little White Lies. (English spoken)

The PDF of the full program is here, and if you plan on going then please follow the instructions and recommendations below to help protect the wellbeing of all visitors.

Tickets for Film Under the Stars

After this date tickets cannot be refunded. Cancellations will be announced at www.ljubljanskigrad.si and www.kinodvor.org by 19:00 on the day of the scheduled screening.

Štoka vineyard is located in the village of Krajna Vas close to the border with Italy. Covering an impressive 10 hectares, the estate lies...
Read more

Despite Dubrovnik having centuries-old trading connections across the globe, the cuisine of this region is very much based on the gifts of nature in...
Read more