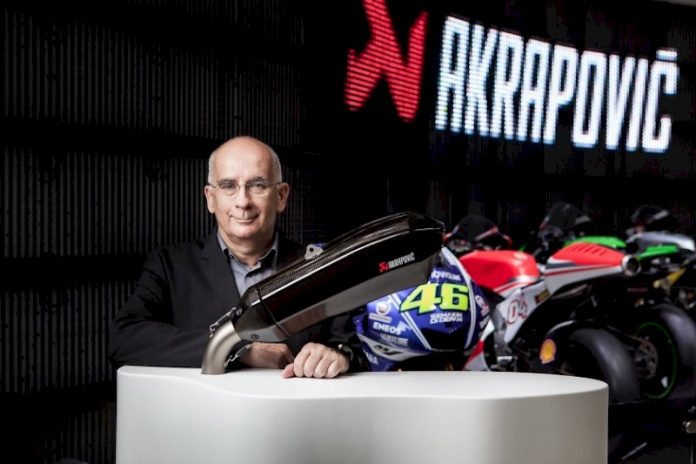 Akrapovič d.d. is a Slovenian manufacturer of exhaust systems that began in 1990 in the motorcycle market, and expanded into automobile exhausts in 2010. A global exhaust supplier in motorcycle sport, Akrapovič exhausts are used on motorcycles in Moto GP, superbike, supersport, supermoto, motocross, enduro and rally raid. As of May 2010, Akrapovič systems have been used in a total of 38 world championships all across motorsport.

Igor Akrapovič – the man behind the firm

Igor Akrapovič began motorcycle racing in 1977 in 250 GP two-strokes, then 1000 cc four-strokes in F1 Open Class, and then in Superbike class by the end of his racing in 1988-1989. He founded a motorcycle tuning shop, Skorpion, with a staff of six, where they made their own exhausts because higher quality Western aftermarket exhausts were too expensive, and those made in the Eastern Bloc were of inadequate quality.

Akrapovič says he was motivated by the poor quality of aftermarket exhausts available to the public compared to those used by professional racing teams. He said that the welded pipes on the market had walls that were too thick, and that racing-quality systems were too expensive and difficult for the average customer to obtain.

He designed his own exhaust system, which was sufficient to his requirements, based on the experience gained in the field of motorcycle tuning. Steel was replaced with materials such as carbon fibre and plastic.

Akrapovič is the market-leading manufacturer of premium exhaust systems for motorcycles and performance cars. It is a pioneer in the innovative use of titanium and super-alloys, and is at the forefront of carbon-fibre components. Akrapovič exhaust systems are renowned for increasing performance, unmistakable sound, innovative design, lightweight construction, quality workmanship, and durability.

Akrapovič has over 1,000 employees and sells its products in over eighty countries. The company’s state-of-the-art factories in Slovenia also include an in-house titanium foundry and metallurgical laboratory.

Racing has always been in the company’s DNA. The technical services and support that it provides to MotoGP, WorldSBK, MXGP, DTM, FIA WEC, and other teams are also the result of this racing heritage and know-how, which the company successfully applies to motorcycle and performance car exhaust systems. Revenue €120 million.

Over nearly thirty years of operation, Akrapovič has turned into a world-renowned brand. The brand has received over forty best brand awards in the motorcycle and car exhaust system categories from well-known magazines, such as Motorrad, PS, sport auto, and Motorsport Aktuell. These awards, which are voted for by people who buy their products.