Looking at the Kamnik-Savinja Alps, a beautiful mountain range closest to Ljubljana, lit in vibrant early morning colors with veils of fog lingering below rugged peaks, I got an ingenious idea I just couldn’t shake off. In a weekend excursion, I would traverse a good part of the Kamnik-Savinja Alps across the peaks I hadn’t climbed yet!

With five out of eleven favored peaks already checked, I was looking forward to climbing another set of five peaks in one go; Ojstrica, Planjava, Turska Gora, Koroška Rinka and Skuta – all mountains above 2 K meters, steep, and on my planned route from east to west. 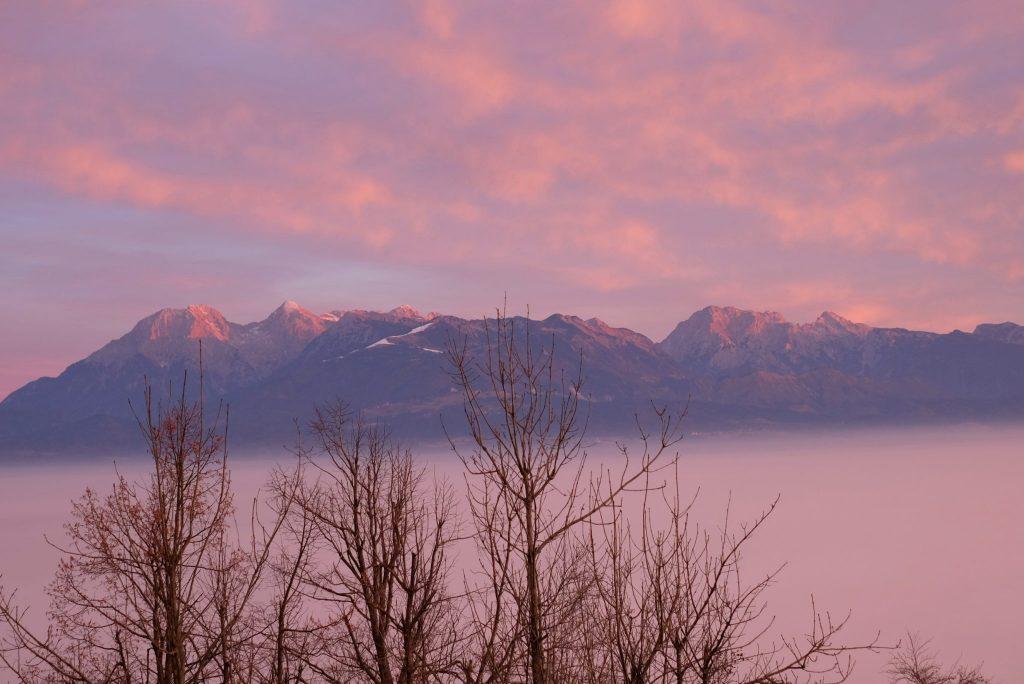 Eerie and spectacular in equal measure, the Kamnik-Savinja Alps are a boutique mountain range within easy reach of Slovenia’s capital Ljubljana with 28 peaks above 2,000 m, the highest peak Mt. Grintovec, 2,558 m, and countless smaller peaks like Goli Vrh. Stretched between a smallish town of Kamnik to the south and the breathtaking glacial Logar Valley to the north, the whole area of the Kamnik-Savinja Alps on the Slovenian side covers 900 m2 and as such makes a prime day-tripping destination for the locals and Ljubljana tourists alike.

Mt. Ojstrica
On a clear Saturday morning, my husband and I headed towards the grandiose peaks in two separate cars. With one car parked in Kamniška Bistrica valley, where we would end the tour the following day, we drove further to the far eastern part of the Alps called the Podvežak Plateau (Slo. Planina Podvežak), an Alpine plateau at 1,500 m close to Logar Valley with cows grazing on flower speckled meadows and views over high green pastures of Velika Planina. The nature wrapped in deep tranquility of an early morning, we hurried down along a long trail towards our first goal of the day, Mt. Ojstrica, one of the most prominent peaks of the Kamnik-Savinja Alps. One’s got to start a tour in style, right?