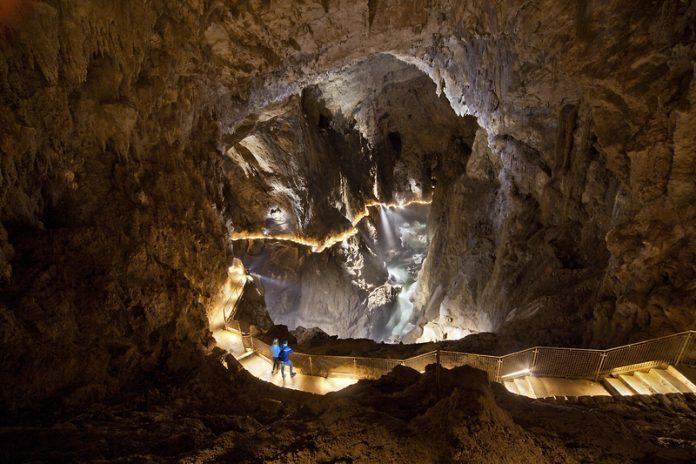 Slovenia is truly a gem in the heart of Europe. Our rich natural and cultural pieces of heritage are under protection of UNESCO. Find out which Slovenian gems are pieced together in the mosaic of world heritage.

The Convention Concerning the Protection of the World Cultural and Natural Heritage protects the cultural and natural heritage of outstanding universal value for all nations and humanity as a whole. Among over 1,000 sites four Slovenian sites are included – two natural and two cultural sites.

Discover the best places to visit in Slovenia here.

Škocjan Caves is located in the Slovenian mysterious kart region, where you will surely find no shortage of natural wonder. Škocjan Caves which with the largest underground canyon in Europe were the first in Slovenia to be entered on the UNESCO World Natural and Cultural Heritage List. The Škocjan Caves were entered on UNESCO’s list of world heritage sites on 28 November 1986. The Škocjan Caves are, above all, a natural phenomenon of global significance, ranking side by side with the Grand Canyon, the Great Barrier Reef, the Galapagos Islands, Mount Everest, and others. The Škocjan Caves are a unique natural phenomenon, the creation of the Reka River. The Reka River springs from below the Snežnik plateau and flows some fifty-five kilometers on the surface. After reaching the Karst, that is the limestone surface, the river not only deepens its riverbed through erosion but also by means of corrosion – it dissolves the limestone.

The Krokar virgin forest is an example of untouched primeval forest in the heart of the well-preserved forests of the Kočevje region, which are also part of the Natura 2000 network in Slovenia. It should be noted that Slovenia features 14 primeval forests occupying an area of 540 hectares. The Krokar primeval forest covers an area of 74 hectares. Its history dates back to the time of the last Ice Age. These are virgin forests located at the heart of the Kočevje’s forest area, which is part of the Natura 2000 natural monuments network.

Snežnik-Ždrolce primeval forests are part of UNESCO heritage ancient and primeval beech forests of the Carpathians and other regions of Europe, are located not far away in the forests of Notranjska and Kočevsko. Ancient beech forests, which secured their spot in the UNESCO list with their preservation, also rustle in the Snežnik Ždrolce Reserve. Both reserves are part of the protected Natura 2000 network.

The oldest Slovenian mining town that had supplied the entire world with this valuable liquid metal offers remnants of the rich mercury heritage at every step. Yet a completely new world opens up when you enter the mysterious depths of Idrija underground. Mercury heritage in Idrija, together with Almadén in Spain, has global recognition: it features on the UNESCO World Heritage List. It is open for tours during which you can learn about old mining methods. What is more, there is also a mining dwarf waiting to surprise you. Numerous attractions in Idrija are connected with the mining heritage and the life of the former mining families: from the surprising technical heritage maintained by the museum at Gewerkenegg Castle to the tradition of original lace making. Let yourselves be charmed by the half-a-millennium-long history of Idrija mercury!

The Ljubljana pile-dwellers and the oldest wheel in the world

Slovenia is one of the countries safekeeping the protected world heritage of the prehistoric pile dwellings around the Alps. Around 40 locations with remnants of piles have been discovered in the Ljubljana Marshes; nine piles in two groups are included on UNESCO lists. The most important find is a 5,200-year-old wheel, which is considered to be the oldest wooden wheel with an axle in the world. Findings related to the pile-dwelling culture are on display in various museums, and the Ljubljana Marshes is a landscape park, where you can explore the natural features of the marshy area near Ljubljana.

Franja Partisan Hospital is a unique monument of humanity, companionship, and solidarity from the Second World War. It operated as an illegal hospital in the difficult-to-access Pasica gorge in Dolenji Novaki near Cerkno between December 1943 and May 1945. It was led most of the time by Dr Franja Bojc Bidovec whom the hospital was named after during the war. Besides the staff, the locals also contributed to the successful operation of the hospital as they helped in building the huts, hiding the wounded in their homes and collecting food, medicines and other materials for them. Since the war, Franja Hospital has become a symbol of the Slovenian partisan healthcare and care of the wounded, helpless and those in need.  Franja is all this and much more – since 2015 a holder of the European Heritage Label!

Get an insight into the life of herdsmen in Bohinj’s pastures in an authentic environment displaying artifacts, photos, and other material. The Museum of Alpine Dairy Farming presents the story of herding and alpine dairy farming in Bohinj as a way of life and coexistence with nature in an alpine environment. This museum in Stara Fužina has located in a former village cheese-making facility. In 1883 a cheese-making plant was built in Stara Fužina in Bohinj, where cheese was produced until as late as 1967. On display at the museum is the original cheese making shop along with original cheese making tools, cheese vats, and accessories, as well as objects used by the shepherds in their work in the mountain pastures. You can also see a wooden interior of a shepherd’s hut from the Zajamniki settlement, dating from 1849.

In 2007, the outdoor museums and the most important remains and memorials of the Isonzo front in the Upper Soča region were interconnected into the Walk of Peace. It is dedicated to the memory of numerous victims of the First World War. Trekking along the about 100 km long Walk of Peace, or only along a part of it, offers to every visitor an active rest in the wonderful, tranquil, unspoiled nature marked with the river Soča, the world of medium-high and high mountains, flocks of sheep and goats, and still active alpine pastures in summer, and the history of the First World War.

The walk starts at Log pod Mangartom at the entrance to the mine shaft named Štoln, and ends at the outdoor museum Mengore near Most na Soči. It is divided into five sections and trekking along each of them can be done in one day. It runs past military cemeteries and chapels, Kluže Fortification, outdoor museums, the Koritnica gorge, the Soča gorge, the idyllic mountain alps, the Kozjak fall, two charnel houses, at Kobarid and Tolmin, a memorial church of the Holy Spirit on the Javorca plateau, the Tolminka gorge, etc.

Karst – a landscape giving its name to the Karst phenomena all around the world. This region represents the cradle of Karstology and therefore it is called the Karst or the Classical Karst. The Karst surprises with Postojna Cave, which is the most visited cave in Europe, Škocjan Caves with an extraordinary underground gorge and other world-famous special features. Lipica has been the original stud farm of white Lipizzaner horses since 1580. Štanjel is the architectural gem of the Karst. Delicious fare can be found along the Brkini Fruit Road and the Karst Wine Route. Karst Plateau is the region where Karst phenomena were scientifically described for the first time. Continuous human settlement for over 2000 years has created a cultural landscape with a unique identity. The karst region of Slovenia is among the richest areas in Europe in terms of flora and fauna and one of the global “hotspots” of biodiversity.

The site encompasses some of the most prominent works of Jože Plečnik. Sites include St. Michael’s Church in Črna Vas, and the following sites in Ljubljana: the promenade along the embankments of the Ljubljanica River and the bridges crossing it, the “Green promenade”: Vegova Street with the National and University Library from French Revolution Square to Congress Square and Star Park, Trnovo Bridge, Roman Walls in Mirje, and the All Saints Garden in Žale Cemetery.

Discover the best places to visit in Slovenia here.