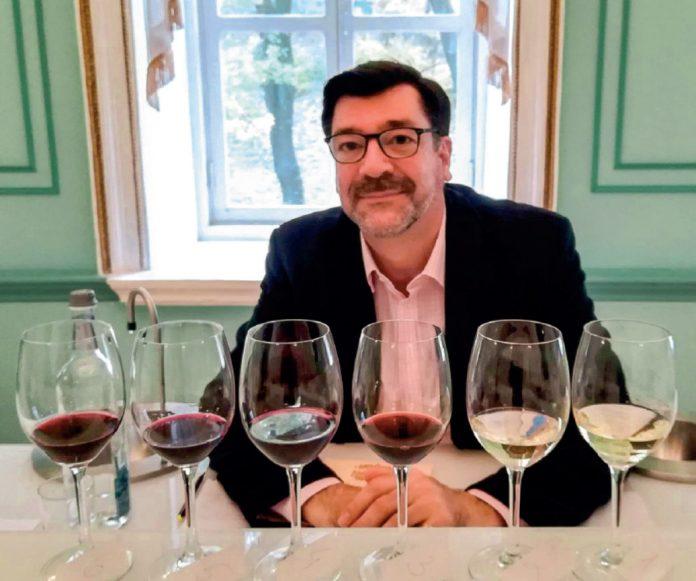 Darrel is an American-born international wine writer, judge and lecturer living in Vienna. He specialises in the wine regions of Central, Eastern and Southeastern Europe, including Austria, Hungary, Slovenia, Croatia
and many Balkan countries, and his writing has appeared in international publications. With his extensive tasting experience, Darrel judges in international wine competitions in Europe, including the renowned Decanter
World Wine Awards in London. In addition, he conducts numerous wine masterclasses, presentations, tastings and lectures throughout Europe.

When did you first become of aware of Slovenia as a wine destination?
I heard about Slovenia’s wines back in the early 1990s, around the time I started to explore Austrian and Hungarian wines in depth. However, I began to cover Slovenian wine only around 10 years ago. Until then, I
was preoccupied with the wines of Austria, Hungary and Germany. Then I began to spread out and look at other Central and Eastern European wine countries; Slovenia, being next door, warranted a closer look. Today, I visit
Slovenia for wine purposes approximately 2-3 times per year.

How is Slovenia’s wine generally perceived by international wine professionals?
Overall, if there is a perception of Slovenian wine, it is very positive. There are a number of top writers and sommeliers and restaurateurs around the world who have become familiar with Slovenia’s wines – some of
the funky “orange” wines, for example, and indigenous grape varieties like Zelen and Pinela – and indeed they like the quality and individuality very much. This is pretty remarkable, considering that it wasn’t too long
ago that Slovenia was barely heard of, especially when it was a state in Yugoslavia. Today, while more and more people are getting to know about the wines of Slovenia, many do not even make the Yugoslavia connection
(especially the younger generations). Of course, Slovenian wines are still relatively unknown on a broad scale. But because Slovenia is a small, niche wine producing country with many ambitious, talented producers
making remarkable wines, its reputation as a quality wine-producing country is growing slowly but ever so surely.

Which Slovene producers are you currently most excited about?
Of course the producers in the western part of the country, like Brda and Vipava Valley in Primorska, are making the biggest splash in terms of wonderful wines with international appeal (Movia, Ščurek, Simčič and Batič to name a few). And they get a lot of attention for them. But it is important to point out that inland regions, especially Štajerska in Podravje, have wineries to keep an eye on, including Ptujska Klet, Lubaj, Verus, Hlebec, Conrad Fürst & Söhne, Miro Munda and, particularly, Kolarić. Some of the most stunning wines now on the scene are made by Bojan Kobal of the Kobal Winery in Ptuj. Absolutely fine, beautiful specimens! The Marof
winery in the Prekmurje region is highly impressive as well.

How does Slovene wine differ from neighbouring countries?
This involves a lengthy answer, much too lengthy to go into here. So I will just make a few points. Slovenia has a few wine regions and these have their own terroir and climatic conditions. The sub-regions near Istria have a Mediterranean influence, while the inland regions have mainly a continental climate. And inland Slovenia is somewhat similar to the Steiermark region of Austria, as Steiermark becomes Stajerska in Slovenia. And of course, there is Goriška Brda in the west, where the vineyards flow into Italy’s Collio. So, Croatia, Austria and Italy would be the first comparisons.

Slovenia can distinguish itself especially by its “orange” wines – those long-macerated wines that can often exude orange peel and mandarin aromas and flavours. The “orange” wine is a style, and Slovenia has gained popularity abroad with it.

What about compared to other European wine producing countries in terms of quality and price?
In terms of producing high quality wines, I would say that Slovenia can compete with most countries. It also has a good showing of entry level and mid-level wines. Price can be an issue in that many established countries are able to produce large volumes of wines that can be sold at consumer-friendly prices (importers getting them at a cheap price). With Slovenian wines, this is not easy, because volumes tend to be low, and it is hard for producers to sell their wines at low prices.