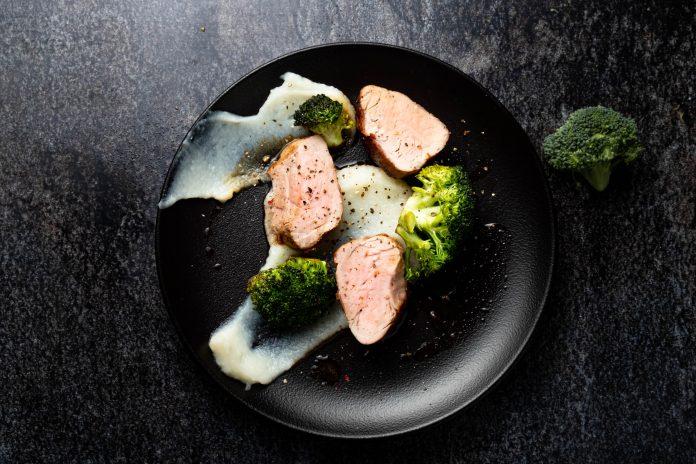 Even if you aren’t the most skillful when it comes to the kitchen, it doesn’t mean you have to stick to calling delivery or preparing basic meals. Believe it or not, it’s possible to prepare a sophisticated and delicious dish without much experience or fancy ingredients. And that is exactly what we’re going to prove with this recipe.

The highlight of the dish is the pork tenderloin. It’s a cut of meat that is so tender, you could literally burn it and it would still be tender! And the best part of it is, that you don’t even have to burn it. For best results we recommend slightly »under« rather than overcooking it.

When you have the whole cut (which we recommend), just cut it in half. Season it well with salt, pepper, put it in a nice hot frying pan and let it fry. Turn it around a few times to get an even crust and that’s it. For how long you’re asking? You can check the internal temperature with a probe meter. But if you don’t have any, just check the middle part (where you cut it in half) of the loin. When it’s starting to get white, fry it for another minute or two, then let it rest for 15 minutes. You should get nice and juicy steaks. And don’t panic if it’s still a little bit pink. That’s how it should be! And if too pink, you can still fry it for another minute.

The meat part is out of the way, now let’s make the cauliflower purée. Chop the cauliflower and cook it in salted boiling water until it’s tender to the fork. Salt. Butter. Blend. Done. Broccoli? Chop it in small pieces and fry it on butter. Add salt, pepper and dried chilli according to your taste. Simple right?

Pork tenderloin is very similar to fillet mignon in terms of tenderness, however, it’s about half the price. It’s also easier to prepare because you don’t have to worry about overcooking it and ruining the steak. In case you have the whole cut, make sure to slightly twist the thinner end. This way it will cook in proportion across the whole fillet. Watch the video to see how we did it.

The recipe prepared in collaboration with Mala Kuhna.