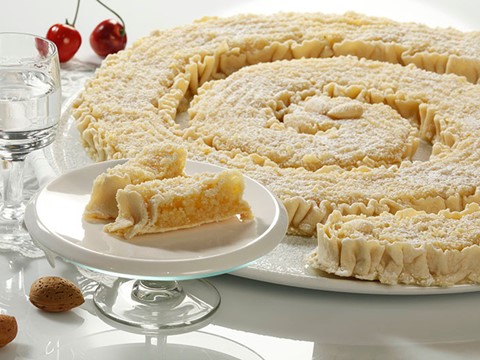 Croatia is a country rich in history, culture, and – traditional dishes!

Its gastronomic scene has been influenced by Austro-Hungarian, Turkish, Illyrian, Mediterranean, Italian, and French cuisines. All these roots present the basis of Croatian traditional recipes.

Due to that, let’s talk more about its gastronomic scene and the famous traditional dishes which are rich in history, flavors, and aromas – even though Croatia has many more dishes, we are bringing you the top 10 which are a must-try! From salty and spicy dishes to the sweet nuances of desserts – let’s dish Croatian food!

Istrian cattle boškarin is an autochthonous Croatian breed of cattle. At first, boškarin was widespread in Istria and the island of Krk but their population declined in the 1980s. It took nearly 20 years to restore the number of boškarin and today, it is bred for gastronomy purposes.

Since boškarin is a symbol of Istria, it presents a true delicacy of that Croatian peninsula. The meat of boškarin is a bit tougher and more challenging to work with, but in the hands of a chef, it becomes a dream ingredient. The most classic meal prepared with this cattle combines freshly prepared meat with a touch of sauce and pasta such as fuži or gnocchi. All the flavors are perfectly combined, and they contribute to the ultimate ecstasy of the used ingredients and aromas.

When it comes to the Croatia islands, almost each of them has its own traditions and specific recipes. Brač’s vitalac is certainly one the most traditional dishes of that island. It is an ancient dish also called shepherd’s food and it has been protected for more than a decade now. The Brač’s vitalac presents memory as one of the first contacts of Greek civilization and the inhabitants of the island of Brač.

The dish is prepared of lamb’s or goat’s guts (heart, lungs, liver) which are wrapped in a lamb “handkerchief” and its intestines. The dish is prepared on a light fire. After it is done, it is served hot. We know, when we present this specialty in words, it almost loses its charm, but trust us – the dish is quite amazing, it is juicy on the inside and crispy on the outside and once you try it, you’ll understand why it is on the list of protected intangible cultural assets of Croatia!

Since we’re already on the island of Brač, let’s stay here a bit longer. Besides its already mentioned meat delicacy, Brač is also known for its traditional cake called hrapoćuša, hropoćuša, and hrapačuša. All these names hide one unbelievably delicious cake. The cake was named after a specific rough stone that formed caves and rocks and from which was build small village Dol. The recipe for this cake is not known to everyone because the women of Brač made the cake only at night so the original recipe stays a secret.

According to many sources, cake hrapačuša is rich in walnuts and it presents a true aphrodisiac. It is simple to make it, it needs only a couple of ingredients (well, ingredients for which we know of), and in the end, the cake presents a perfect balance of dough, walnuts, and sweetness. But if you’re looking for the real deal, you know where to go – to Dol on Brač!

From Dalmatia to a beautiful Slavonia – čobanac is an indispensable dish when it comes to celebrations and gatherings. Čobanac got its name after shepherds which kept cattle on pasture and prepared this dish on a hearth in nature. The recipe for čobanac varies from one region to the other, but its tradition is mostly kept in the region of Slavonia and Baranja.

The main ingredients for čobanac, no matter which recipe is followed, are a lot of onions, meat, and spices. When it comes to the meat, čobanac can be prepared of pork, beef, mutton, and game. The dish is tasty and rich in flavors and aromas. It is a bit spicy, but it perfectly combines with the meat and homemade bread.

Let’s talk about the beautiful island of Vis and its amazing Komiža’s bread. The bread is an aromatic and salty dish with a long tradition of preparation. It is an autochthonous recipe of a small fishermen’s place called Komiža. Inhabitants of the island and the village used easily accessible cooking ingredients and that tradition presents a basis for their simple but so delicious cuisine.

Komiža’s bread is tasty and rich with a juicy filling. It is made of homemade dough and red onion, tomatoes, salty anchovies or sardines, and seasonings. The bread has a beautiful combination of sweet, sour, and salty flavors with seductive aromas and amazing texture, and it creates a true ecstasy when it is served with red wine.

More than 200 years ago and during Napoleon’s occupation of Dalmatia, one of its soldiers fell in love with a girl on the island of Korčula. It is not certain where the girl lived, in Blato or Vela Luka, all is known is that they had a love to remember. One day, he had to go and before he left, he made her a cake with a note N’oublie pas or in English – don’t forget me. Since the girl didn’t know the French language, she said lumblija and that’s how the cake came to be.

Lumblija, which is today only prepared in Vela Luka and Blato, is made of almonds, lemon’s and orange’s juice and peel, raisins, olive oil, and varenik (syrup). The cake is quite delicious and juicy, and it is prepared in memory of those who we have lost.

This ancient Dalmatian dish origin from a combination of antic, greek, and roman cuisine. Similar dishes were prepared during the Venetian Republic but from then until now, pašticada with gnocchi has been a traditional dish of Croatian gastronomy – Dalmatian took the basis of pašticada’s roots and turned them into their key and most famous dish. Pašticada has a quite complicated recipe but it is so delicious and unique that it has been listed as a Croatian Gastronomic Heritage.

In the past, it was made of beef fillet, but today, there is less and less quality beef, so it is mostly prepared of the beef thigh. Pašticada needs time to be made – it needs to be marinaded 12 or more hours but, in the end, it is delicious, tasty, and rich in a beautiful harmony of meat, sauce, and gnocchi.

The Rab’s cake has a long history. The legend says that it was first made in 1177 when pope Alexander the Third came in the Rab with 10 galleys while looking for shelter from a storm. For the gratitude, honor, and respect, the Benedictine nuns prepared Rab’s cake for him. Another legend says that the pope himself gave the nuns the traditional cake Ricarelli di Sienna so the people of Rab took over its recipe and make Rab’s cake. Whichever legend is true, the fact is that this cake is just amazing.

The traditional recipe is carved in a stone and it is kept in the archives of the monastery of St. Andrew. But there are only ingredients, not the measurements for the preparation. Due to that, only the people of Rab know how to prepare it properly. The key ingredients of the cake are almonds, sugar, and lemon’s and orange’s peel. All the ingredients create a beautiful harmony of flavors and aromas, while the dough emphasizes its beauty and details.

There are a lot of recipes for risotto, but one of the most famous recipes for this Croatian dish comes from Skradin. Skradin risotto is a dish that needs 8 to 10 hours of preparation and traditionally, it is prepared in Skradin by men. But all the time and hard work certainly pay off once you try their delicious nuances.

Despite its long preparation, Skradin risotto is made of quite simple ingredients – onion and rose veal. Besides that, the soup or broth is made of root vegetables, onion, tomatoes, veal shank, veal neck, and chicken. Now, imagine all the ingredients prepared together in a unique risotto rich in flavors and aromas – oh, quite tasty!

Dalmatian Hinterland is known for its recipe for soparnik. This dish dates back to the time of the Republic of Poljica. In the past, soparnik was prepared during fasting days and it was a basic dish of peasants’ nutrition. Today, it presents a delicious traditional dish, and its preparation is listed as a protected cultural asset of Croatia.

To put it simply, soparnik is a pie made of mangel. Its dough is homemade and thin, while its filling contains perfectly combined mangel, onion, and parsley. The dish is crispy on the outside and beautifully juicy on the inside, while all its ingredients create an amazing twist of flavors.

Croatian cuisine is truly rich and diverse but thanks to that, it is unique, tasty, and delicious. All the different ingredients, flavors, aromas, and nuances create a true ecstasy and unforgettable gastronomic experience.

Now that we’ve talked, imagined, and got hungry together – which of the dishes you’ve already tried, and which ones are on your must-try list?

TOP 10 Slovenian Dishes
Slovenia is officially the European Gastronomic region of 2021, meaning many foodies and culinary enthusiasts have placed on their travel bucket lists for 2021.  Explore the top 10 Slovenian dishes before traveling to Slovenia. From creamy deserts to the most amazing bread you will taste. We have gathered a fine selection of top 10 Slovenian […]

In the light of the European Gastronomy region – Slovenia continues to make a mark as a culinary destination
Ljubljana has to be on your bucket list, especially if you are a culinary enthusiast. Despite the fact that restaurants in Slovenia are currently still closed and only offer delivery or take out, culinary enthusiasts and foodies alike are celebrating the title of European Gastronomic region of 2021. Ljubljana as the capital of Slovenia remains […]

Get the latest information about Coronavirus and lockdown in Slovenia here. Slovenia has conducted over 2,682,000 COVID-19 tests since the global pandemic started last...
Read more

There is no secret that Dalmatia hides some beautiful pearls. It has breathtaking views, islands enriched in culture, history, and ancient spirits which wander...
Read more