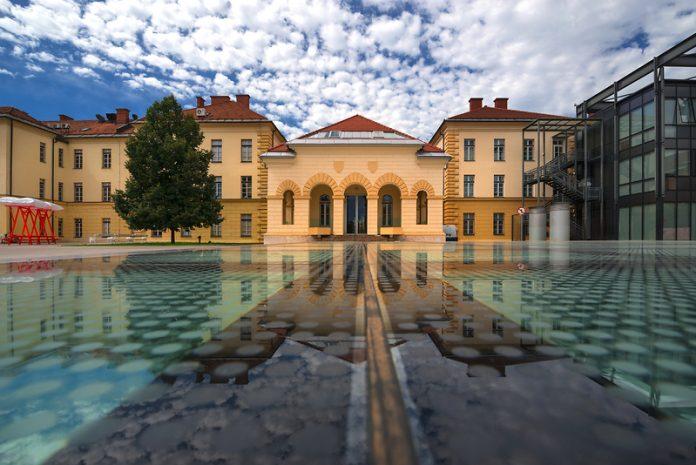 Ljubljana is the capital of Slovenia, and indisputably probably the cultural capital of the country as it has the highest number of museums in Slovenia. Visit the top 10 museums in Ljubljana and discover the rich Slovenian tradition and history, alongside the many talented Slovenia artists.

Slovenia organizes a special event every year, during which the museums and galleries in the whole country have free entry for all. This year the summer museum in Ljubljana will be held on June 20. If you will be in Slovenia make sure you visit a museum or two.

The museums listed below are ten of our favorites, but if that’s not enough to satiate your cultural appetite, you can check out our full guide to Ljubljana’s museums and galleries here.

Number one on our list of top 10 museums in Ljubljana is the National Gallery of Slovenia. Housed inside a fabulous late 19th-century neo-Renaissance palace designed by the Czech architect František Edmund Škabrout and with extra space in a modern wing, this wonderful gallery features the very best in Slovene art from the 13th century up to the first half of the 20th century, including paintings by such notable artists as Ivan Grohar (1867-1911), Richard Jakopič (1869-1943) and Ivana Kobilca (1861-1926).

This top museum in Ljubljana is one of the most popular ones. This half of the state-owned Moderna Galerija focuses predominantly on showcasing a diverse and equally inspiring collection of Slovene and international art dating more or less from the ‘modern’ period of the 20th century. Not just focusing on painting, the collection holds works spanning many genres including photography, sculpture, and graphic art. There is also an amazing cafe by this top museum in Ljubljana.

The City Museum of Ljubljana is located in a true architectural monument. It is also one of the top museums in Ljubljana. The permanent exhibition brings a chronological overview of the Ljubljana basin area and gives visitors the opportunity to learn about the town’s history. It draws attention to the city’s important geostrategic position and to the extraordinary events in the history of the area. Two of the more notable pieces on show are a wooden wheel with a wooden axle and a wooden spear point, aged around 40,000 years old. The wheel was discovered in the Ljubljana Marshes in 2002. Radiocarbon dating shows it to be approximately 5,150 years old, making it the world’s oldest. The exhibition offers an overview of Ljubljana’s history in a creative and fun way with the use of interactive features, short films, guided tours, and workshops.

The Slovene Ethnographic Museum is a museum ‘about people, for people’, which prides itself as being the link between the past and the present, between our own and other cultures, between nature and civilization. A central museum of ethnology, a museum of dialogue, open, active and hospitable with dedicated public services, the museum is located in an urban cultural center and former military barracks in the Metelkova area, which have undergone a complete restoration, and in the future will form the center of Ljubljana’s arts scene. No wonder this museum in considered one of the top 10 museums in Slovenia. Through two permanent exhibitions, diverse annual temporary exhibitions, and other events, Slovene Ethnographic Museum in Ljubljana presents and reports on the traditional culture of Slovenia and other cultures of the world in creative and imaginative ways.

This half of the state-owned Moderna Galerija follows on from the work on show at its sister Museum of Modern Art and concentrates on work from all genres produced both in Slovenia and abroad from the 1960s onwards. Museum of Contemporary Art Metelkova is one of the top museums in Slovenia. Among the many things on display, we recommend the permanent collection devoted to Eastern Europe’s post-war avant-garde movement.

If you needed a reason to visit Tivoli Park, here is the next top museum in Ljubljana. This fascinating museum inside a wonderful 18th-century mansion presents the history of Slovenia from the period around the start of the First World War until the Slovenian Presidency of the EU in 2008. Using a combination of well-presented exhibits including old photographs, clothing, and household items the museum charts the often wobbly path of the nation through and between the two world wars and the difficult and truly fascinating post-war communist years. The building alone is worth seeing, being a marvelous combination of original Baroque and the interesting modernist work of the Slovenian architect Jurij Kobe who extension to the museum dates from 1991.

Located in Fužine Castle in the far east of the city, the Museum of Architecture and Design is the main Slovene institution operating in the fields of architecture, urban planning, industrial and graphic design, and photography, and one of the top museums in Ljubljana. The museum collects and archives work from these areas, which can then be used for both educational purposes and public exhibition, and also acts as a museum and architectural and design center whose mission is to facilitate the exchange of ideas and knowledge and the establishment of urban, architectural and design dialogue.

Next on our list of top 10 museums in Slovenia is the extraordinary House of Experiments in Ljubljana features three rooms of purpose-built experiments for the ultimate hands-on experience. Visitors are free to wander around as they wish, engaging with anything that takes their fancy, whether it’s a giant bubble maker, electronic insects, dancing liquid or a machine that plays music according to your weight. They also provide what they call Adventures, namely small performances that aim to show different scientific principles, with enticing names like the Centre of Gravitology, Eggology etc. A visit to the house of experiments will be an amazing experience for the whole family

Number 9 on our list of top 10 museums in Ljubljana in the Slovenian School Museum. This museum is perfect if you miss the school days or if you are interested in how school was being organized in Slovenia back in the days. Currently housed in a former school, has been open since 1898, this small museum recreates the institutional atmosphere of former days with exhibits of old school rooms, uniforms, equipment, and books. Covering education from Roman times to the 20th century, this is a place that every schoolchild in Slovenia visits at least once, and will be of interest to all pedagogues and historians.

Isn’t it aimzang waht the hmaun mnid is cbapale of seineg? To experience just how much your eyes and brain can be deceived, go check out the fascinating and informative House of Illusions. Best enjoyed by groups so you can see each other be transformed, take the family, friends or colleagues for a fun-packed hour or two exploring the three floors of optical illusions and mind-bending installations. There’s also a games room where you can try your hand at one of their mind-bending puzzles which are also for sale, so perhaps that’s your gift shopping sorted, too. A word of warning. Consider avoiding the vortex tunnel if you’ve just had lunch or a few drinks.