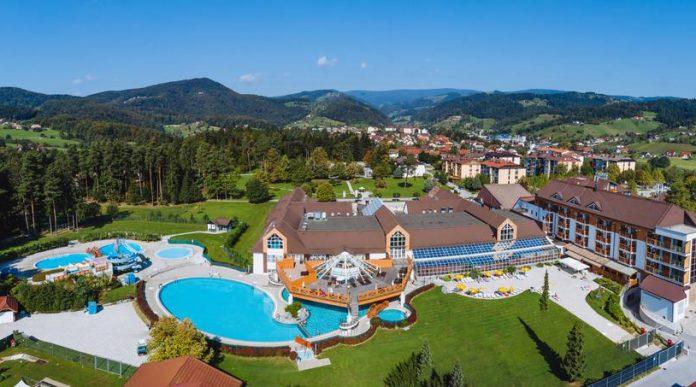 Located at the foothills of the impressive Pohorje Mountains in a region of outstanding natural beauty and diversity, the history of the small town of Zreče dates back almost 4,000 years to the end of the Stone Age.

First mentioned in written texts in 1244, the town and the immediate region has been until recent times an area of intense activity in a number of traditional industries including the timber trade, glass-works, and perhaps the trade that best symbolizes the region, blacksmithing. Today’s Zreče is a fascinating mix of industry, agriculture and an ever-increasing tourist industry.

With a total population of less than 7,000 people in the entire municipality, Zreče has an extremely laid back feel to it and is the ideal place to come for rest, relaxation and a wide range of cultural adventures in the fresh mountain air. The recent development of the large Terme Zreče spa and the ski resort at Rogla 15km to the north have added a new buzz to the region and its popularity among both locals and foreigners is gaining on an annual basis. Famously twinned with the English town of Sedbergh in 2005, an event that became a well-known event thanks to a BBC documentary made on the subject, Zreče offers the perfect blend of tradition and modernity in a truly charming setting. Enjoy!

LOVRENC LAKES: The day we tire of beautiful lakes is the day we need to get out of this profession. A series of between 11 and 22 (depending on water levels) bodies of water make up Lovrenc Lakes, covering some 16 hectares of land over 1,500m into the sky, not far from Rogla and cozily sat between the peaks of Planinka and Mulej. These are the most southern marshes of their kind and the spruce forests that surround them make for a unique experience, one exacerbated by the specially designated walks around the area via wooden paths.

SKOMARJE HOUSE: In a country full of villages in mountains it takes something special to be the highest functioning one and ‘something special’ is exactly what Skomarje is. That people still farm way up here in the mountains is impressive enough, but the tiny village is also home to a number of cultural and herit-age sites that make the trek up worth it. The center of cultural life in Skomarje is undoubtedly the eponymous house, a 17th century building that was restored in the 20th century and frequently houses poetry readings, workshops and the like.

Elements of the late medieval smokehouse style are on show here alongside later advances such as the black kitchen, with everything set out to mimic how life was lived in Skomarje in the long ago. The building was home to an entry room, a living room, a sleeping room, a kitchen and even a press room, but the restoration meant that certain functions had to be altered, as the whole house wasn’t able to be a part of the museum. Info: Skomarje 30.

ZREČE LAKE: Created in the year 2000, Zreče Lake is made up of two very distinct parts. The larger lower part is all aesthetics, glistening water backed by lush greenery and perfect for idly watching a summer’s day go by. The upper part is entirely overgrown and has been given over to nature, specifically set aside for spawning. The lake itself is full of engineering quirks, whether it is the clay-sealed bottom or uncovered walls. When the sun is signing we recommend bringing a book and a beer or two – you’ll find it hard to leave.