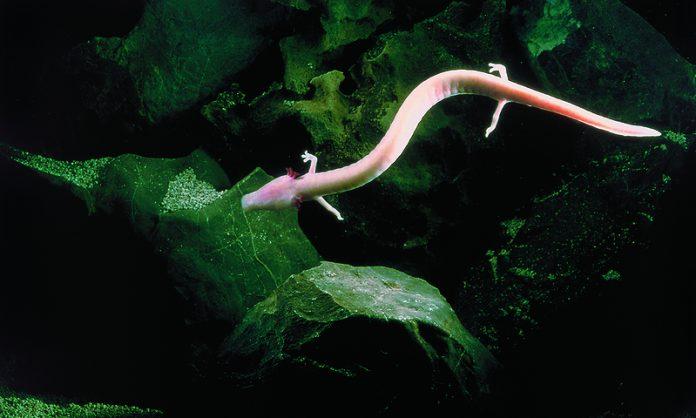 Every person who watched Game of Thrones has probably liked the possibility of the existence of dragons. And we can relate, dragons are cute and they breathe fire, which can destroy your enemies.

All jokes aside … Slovenia is home to little dragon-like creatures called the human fish. Learn everything you need to know about the human fish in Slovenia here.

Daenerys Targaryen might have had three dragons (at least at the beginning of the show … spoiler alert), however, there are around 150 species of the human fish found in the mysterious subterranean world.

Human Fish is also known as the olm (Proteus anguinus). The human fish is an aquatic salamander and it only lives in the subterranean part of Europe. Human fish eats sleeps and breathes underwater. Most of the human fishes in Europe can be found in the Dinaric Alps, where the water is pristine and clean.

The human fish is a very sensitive creature, which has adapted to life in complete darkness in its underground habitat.

Human fish are usually around 25-30 centimeters long. Human fish is a tube-shaped salamander, which is the only vertebrate in Europe that is exclusively found underground. Human fish in Slovenia has completely undeveloped eyes and an inner ear for all its balance and hearing needs.

Its longevity can be put down to a number of reasons, namely its protected status and the fact that it lives in an extremely controlled environment with zero predators (other than flash photography). Therefore, if you ever see a human fish in Slovenia, please make sure your flash is off, before snapping a pic for your Instagram profile.

Human fish swims with a serpentine twisting of its body, along with a few movements from its underdeveloped legs. These have three toes on the forelimbs, but only two on the hind ones.

The most important aspect of human fish or proteus is certainly that it only lives in extremely clean water. If the human fish disappears from water, this may indicate pollution, so we Slovenians are glad that “little dragons” have lived in its underworld for so long, which indicates the underground waters in Slovenia are clean.

Not only is the water in Slovenia clean, but it also covers a significant part of its territory. Locals can enjoy no less than 1300 natural and artificial lakes, springs, waterfalls, rivers, and the sea. Slovenia has more than 27,000 kilometers of a rich and ramified river network and 54,000 kilometers of river banks and lakeshores. Slovenia is one of the richest countries in the world when it comes to water. Learn more about the cleanest country in the world.

Origin of the name human fish

Proteus or the olm, has gotten its nickname “human fish” due to its fleshy skin color. His skin has zero protective pigmentation in its skin. However, if exposed to light the skin will begin to darken. There’s also a black olm, which lives closer to the surface and can be found near Črnomelj.

In Slovenia, we call the human fish – človeška ribica, but pronouncing človeška ribica can be quite difficult for foreigners who might be still learning Slovenian language.

Furthermore, Valvasor described the mysterious dragon-like creature like a lizard, but shorter, which kinda reminded people of a worm or vermin. Interesting, right? What does it remind you of? Let us know what do you think about the human fish in Slovenia.

The proteus or human fish has come to great prominence in the centuries since Valvasor wrote about the lizard-dragon-worm-like creature. Charles Darwin famously used them as an example of his theory of the reduction of structures through disuse, citing their blindness as something that had been gotten rid of overtime.

The oldest science magazine in Slovenia also took its name from them, called ‘Proteus’, and first being published in 1933. The human fish also found itself on a tolar coin, until the Euro replaced the Slovenian currency in 2007.

Although most closely associated with Postojna, the human fish isn’t only found there. It also has natural homes in Italy, Croatia, Bosnia and Herzegovina.

Birth of the human fish in Postojna Cave

One of the proteus females laid some eggs in 2013 in Postojna Cave, but none of the offspring managed to hatch. An adult female of the human fish generally breeds once every 12.5 years, laying an average of 35 eggs. The embryos take between 86 and 140 days to develop, depending on the water temperature. It then takes 14 years for the little wonders to reach sexual maturity.

On 30 May 2016 at exactly 10:48, Postojna Cave, one of the most stunning karst caves in the world (not to brag), was the location of the hatching of the first baby human fish since this rare aquatic salamander began laying eggs in January. This time, biologists were much more careful when taking care of the development of the eggs.

It was a historic event that could be observed for the first time in the 200-year public history of the cave. The miraculous birth of the human fish in Slovenia, which was closely followed by the public all over the world, could inspire you to visit the karst underground and learn about its most famous dwellers – the human fish, also known as “baby dragons”.

The baby human fish came into the world exactly four months after the parent laid its first egg in the aquarium. It evidently could not wait to come out, as it literally “shot out” in a single try. In order to become familiar with its home, it first swam around the aquarium before calming down at the bottom of the tank. Its arrival into the world was filmed by infra-red cameras, and the first footage of the hatching of a human fish egg holds a priceless value for biologists.

You will be able to see the human fish when you visit the Postojna Cave.