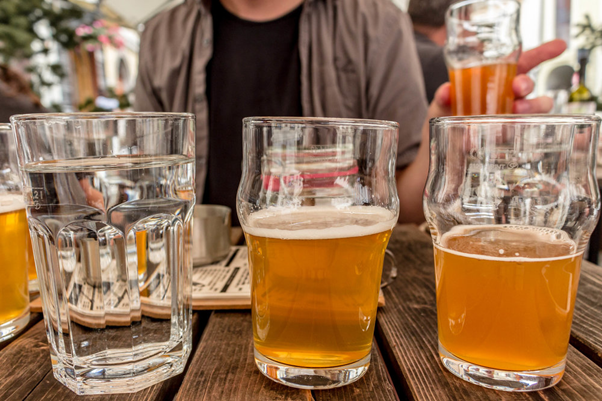 Slovenia is known for it’s beautiful nature and great traditional cuisine. Many tourists visit Slovenia solely to try their wine. In the past 10+ years, there is another beverage that is getting quite a bit of attention in Slovenia, BEER!

We gathered a list of Slovenia’s top notch craft breweries you must visit while staying in Slovenia.

The HumanFish brewery was established in 2008 and is known as the first craft beer brewery in Slovenia. It is located about 20km away from Ljubljana in a small city named Vrhnika. They have their own Tap room where you can enjoy a good old IPA (their version is called SIPA) and many more delicious beers that for sure won’t disappoint. If you would like to have an experience in between tasting different beer choices from their menu you can also book a tour and see how their beer is brewed.

Pelicon is an independent microbrewery in the heart of the Vipava valley, Ajdovščina. They launched their first beer in the end of 2013 and are best known for their IPA called 3rd Pill. In their bottle shop you will be able to buy beer, tonic, gift cards and, of course, their merch. If you are interested in finding out what kind of beer they brew, you can check their offer on their website.

The Green Gold Brewery is located in one of the most significant Slovenain hop regions in the Savinjska Valley. It is a family business owned by the Rojnik family. They offer you amazing brewery tours but sadly they don’t have their own tap room, however there are a lot of bars that offer their beers and they also have their own webshop that allows you to order their beer right to your front door.

Green Gold is also known for their unique can designs that really are something special.

Is a family owned microbrewery that was established in 2017. The brewery is located in Bežigrad district in Ljubljana. The Omniwar brewery has no “open door” policy and therefore they do not offer any kind of brewery tours nor do they have their own tap room. They have limited capacity and usually produce about 10.000 bottles per month. They produce 5 different styles of beers, the most prominent of them is without a  doubt their NEIPA called Tutti Frutti. You are going to be able to find their beer in bars with a more local offer. In the past few months we have spotted their bottles at the supermarket store Hofer (you can find them in almost every city in Slovenia).

The Tektonik brewery is a microbrewery established in 2015. It is located in Ljubljana. Sadly the Tektonik brewery does not have their own Taproom nor do they offer any kind of brewery tours. There are however a lot of bars, pubs and stores that offer their beer. You will also be able to grab a bottle in a lot of restaurants located all over Slovenia. For a more detailed list of locations, click here.

The Mali grad brewery was established in 2014 and is owned by Anja and Urban Florjančič. The brewery is located in Kamnik, about 20km away from Ljubljana. They do have their own Tap room and that allows you to visit the brewery, order a beer (or six) and enjoy the taste while sunbathing on the terrace. The special thing about Mali Grad brewery is the fact that besides the beer they also produce gin (for all our fellow gin drinkers out there). In their tap room everybody will find a great alcohol beverage of their choice!

The Loo-blah-nah brewery is the biggest independent craft brewery in Ljubljana. Because the name of Slovenia’s capital is almost impossible to pronounce for almost every foreigner they decided to make it easy for them and name the brewery the way that makes it easy to pronounce. Their first beer was brewed in 2016, because they didn’t have their own space they were brewing in other breweries and were known as “gypsy” brewers (that is usual for a looot of small brewers at the beginning). They opened their own brewery in 2017.

The Hopsbrew brewery was founded in 2016 by a young couple originally from Russia. The Hopsbrew brewery is a microbrewery and they do not offer any kind of brewery tours nor do they have their own tap room, but the good news is that you are going to be able to get their beer in a lot of stores, pubs, bars and restaurants all over the country. They do offer a wide variety of different beers so if you want to try them here is a detailed list of locations that offer their delicious beverage.

The Lobik brewery is located in the second largest city of Slovenia in Maribor. They do not only offer their beer but also a brewery tour called the Lobik experience where you can have a behind-the-scenes look at beer making. Besides the brewery tour they have their own Tap room located a bit out of Maribor in Ruše, the Taproom is open every friday from 18:00 until 00:00 and believe us when we say, you won’t be disappointed if you choose to visit them.

Definitely the hidden gem of Slovenia’s craft beer culture is the microbrewery BREWWOOD. The brewery is located in Kočevje, a good hour ride away from the capital Ljubljana. The brewery is a small business and therefore does not produce in bulk, that means that the bottles they do produce are – let’s say it as it is – nothing like you have ever tasted before. Because they are so small they fill and pack the bottles by hand which makes the whole experience a lot more personal. At the moment the beer is almost impossible to spot in any pubs, bars, restaurants or stores, however they do have their own webshop where you can find all the beers they brew and order them right to your front door!

If you are lucky enough to travel to Slovenia during summer/early autmn you will be able to find events in the capital and other cities that offer you a fair amount of Slovenia’s craft beer for example the Burger & Beer fest in Ljubljana and the Beer fest in Maribor.

If you happen to be more of a wine person, make sure to read our list of Slovenians best winemakers or a list of  Slovenia’s best sparkling wines. Because we know how good food goes hand in hand with good beer, we also recommend you to check out the list of top 100 Slovenian restaurants.

We hope this list (keep in mind that it does not contain all the fantastic craft breweries out there) gives you a good idea on where to go while you stay in Slovenia.

Why Slovenia is one of the best holiday destinations for 2021?