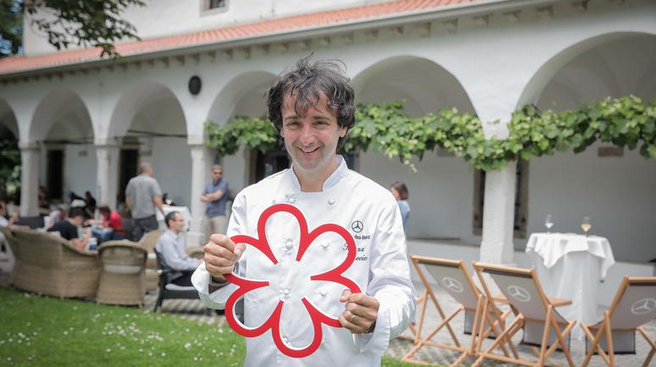 A short time ago, we visited Ana Roš: one of the world’s best cooks. She’s based here in Slovenia, in her restaurant Hiša Franko, near Kobarid on the Slovenian-Italian border. She shot straight into Slovenian gourmet history when she was immediately awarded two coveted Michelin stars.

I have been friends with Ana for a long time: in fact, I was very proud to be able to introduce her to my Slovenian wife many years ago. A short time later, Darinka, (my wife) returned the favour by introducing me to Tomi Kavčič – later to become another Slovenian superstar chef.

At the time, Darinka was head of PR at the oil company Petrol, which sponsored a rally team where Tomi was a young co-driver. He had previously learnt the chef’s trade at his parents’ restaurant, but then decided to pursue a more sporting career.

Thank goodness, later on his Mama convinced him to come back to the stove! Everything Tomi tackles, he tackles with a passion, so it wasn’t surprising that he quickly became another of Slovenia’s top chefs. By the time Darinka introduced me to him, he’d moved from the old country inn to a superb renaissance gem: Zemono Castle, ideally located in the Vipava Valley, one of the best wine regions in Slovenia.

I was fascinated from the start by his unique approach to cuisine. Whereas Ana Roš boldly experimented, Tomi always remained a little ‘down to earth’, refining traditional local dishes rather than inventing new ones. Not that this ever hampered his creativity. He would transform even the sometimes rather heavy, traditional Slovenian specialties into something fresh, light and surprising, yet still recognisable.  We said ‘Ana likes to experiment; Tomi is the tinkerer’.

Recently, we paid a visit to Zemono, and of course we were curious to see whether Tomi’s approach has changed now that he, too, has been awarded a Michelin star.

However our six-course menu was conclusive proof that Tomi has not only remained true to himself but has taken his unique philosophy even further. It is his talent to lift the simplest ingredients and dishes up into the starry gourmet sky.

For example, marinated trout from the neighbouring creek turns from simple to sublime when it’s floating in an autumn-coloured painting made of vegetable creams. What sounds like a fairly ordinary beef soup is transformed into a taste explosion when matched with a tenderly-grilled piece of veal cheek. A block of herb salt maqically brings out the best in a Branzino fillet, vegetable creams are literally ‘pulverized’ into mouth-watering essences … and the Slovenian coast meets the upper Carniola when a little Octopus sits happily on a piece of traditional polenta. A little potato dumpling is simply filled with almost liquid egg yolk – ok, a little truffle on top is here also allowed. Finally, even the utterly traditional Slovenian Potica is transformed into a Michelin Star-worthy finale without losing sight of its beloved origins.

It’s this appreciation of the simple things that is the heart of Tomaž Kavčič’s kitchen philosophy, and that’s what – thank goodness – resonated so deeply with the Michelin inspectors.

The final thing that I need to emphasise about a visit to Zemono is the hospitality and warmth of the welcome you’ll receive. Tomi’s humble and simpatico manner has rubbed off on every member of his staff.

And for that alone, he would deserve his star.