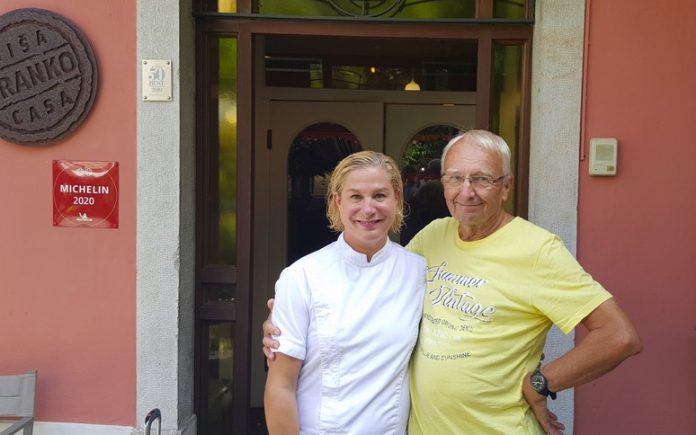 It seems that fate not only gave Ernest Hemingway the talent that made him a superstar novelist, it also led him to the best places on earth. Venice (where he made Harry’s Bar famous) …Madrid…Paris…Kilimanjaro…Opatija…St Moritz…he celebrated them all in his stories.

He also wrote movingly about the Isonzo Front where, at the age of just 19, he came as a war correspondent. He was wounded, and ended up in a field hospital where he fell in love with his nurse, inspiring his novel ‘A Farewell to Arms’. Should he come back and visit that field hospital today, he would perhaps fall in love all over again – but this time with the cuisine. For that place today is the restaurant Hisa Franko.

An insider tip, and the magic begins…

It was 20 years ago when the lure of this Hemingwayesque destination, and an insider tip in the Austrian newspaper KURIER that Hisa Franko was a real culinary find, drew a friend and me on a motorcycle trip of discovery. On a rainy autumn day in the year 2000, we got off our motorcycles, soaking wet, in front of Hisa Franko. We were the only guests, and Ana Ros herself sat us down to dry by the stove and took care of our wet clothes. I will never forget that kind welcome – and the fluffy pumpkin gnocchi in a light sage sauce that she then served us. In those days, I had no idea that you could make something so delicious out of a pumpkin.

We became friends, and I was very proud to introduce Ana and this incredible place to my Slovenian wife, who had never heard of it. Hiša Franko was still very much insider knowledge at the time! We visited so regularly over the next few years that we almost became part of the family, and brought many international friends to stay.

We followed Ana’s career as she rose to become a star, being crowned the World’s Best Female Chef in 2017. She became the ambassador for Slovenian gourmet cuisine, ensuring its international reputation. Because of her, even the august Guide Michelin became aware of little Slovenia’s incredible cooking. Sadly, but inevitably, the hustle and bustle of stardom claimed her and we lost touch for a while.

When Michelin gave out its stars this year, it was no great surprise that Ana was there. But to go, as she did, from no stars to TWO stars was an absolute sensation. We had to go back and celebrate her success.

It was wonderful to see her again, and as with all good friends, it felt like it was only yesterday that we’d last met. That wonderful, warm Ana welcome has not changed one bit. The pretty house is still the same, too, though the décor has become tastefully minimalistic. Her herb and vegetable garden is even larger, because a part of her cooking philosophy has always been ‘From the garden to the table’. And the small creek still flows through the garden by way of a collecting-tank full of juicy trout, awaiting Ana’s kitchen.

We were absolutely right to be excited about the meal. What came to the table had nothing to do with mere cooking any more. This was fine art.

We travelled on a flight of fancy through the wonderful flavours of Slovenia in 12 perfectly-orchestrated courses. Every plate was a work of art, delighting the eyes as well as the palate. Ana’s husband Valter, a gifted sommelier, provided the perfect selection of accompanying wines.

The whole experience was unforgettable, but if I absolutely had to pick a few personal highlights, they would be:

An astounding Buckwheat beignette, filled with sour ricotta and bee pollen. The Trout Trilogy, where our friends from the pool outside were transformed into culinary superstars. And, tender as butter, a roebuck complimented with a magical combination of beeswax and bee pollen garum, preserved berries and wild mushrooms. Finally, I’d have to add the beautifully-curated selection of exceptional aged Tolmin cheeses from Valter’s famous cheese cellar.

A star with two stars

All in all, it was a dream of a meal. Ana has truly become a star with two stars. She has found her personal signature, but remained down to-earth and modest at the same time.

As to what makes her kitchen so unique, I can do no better than quote her own words from the last chapter of her book ‘Sun and Rain’:

“In my eyes, the kitchen is a symbiosis of three elements: the terroir, the season, and the personality of the chef. And that personality isn’t just something you’ve inherited: rather, it is a collage, a patchwork of all your life experiences. Travelling, childhood, memories, parents, grandparents, birth, death, love, religion, teachers, friends…they are all part of it.”

Thank you, Ana. We’ll be back.